Search
from 81€ per night

In the holiday region: Tuscany 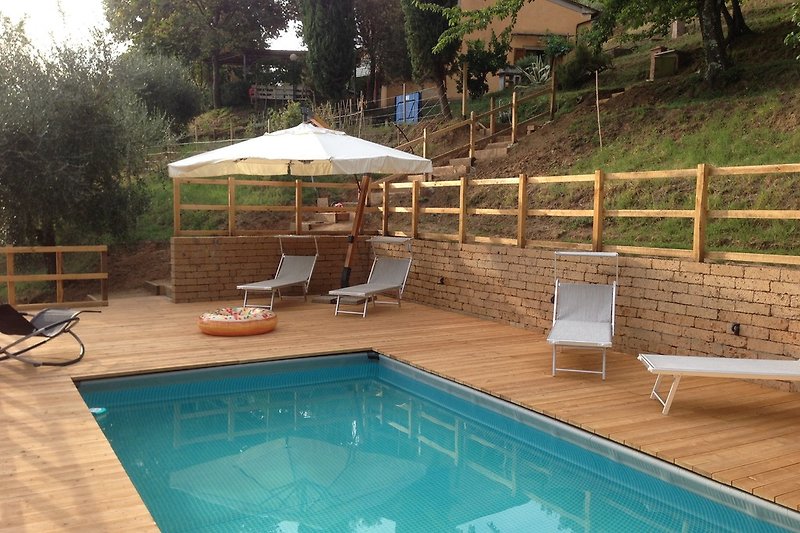 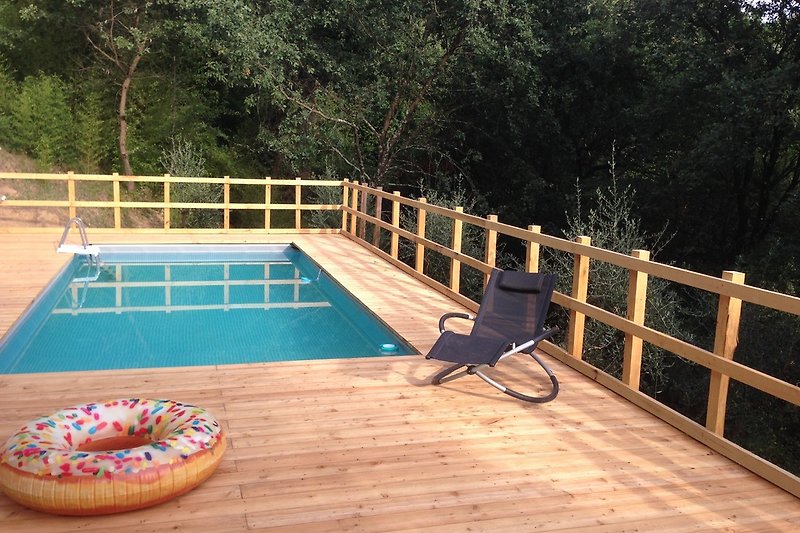 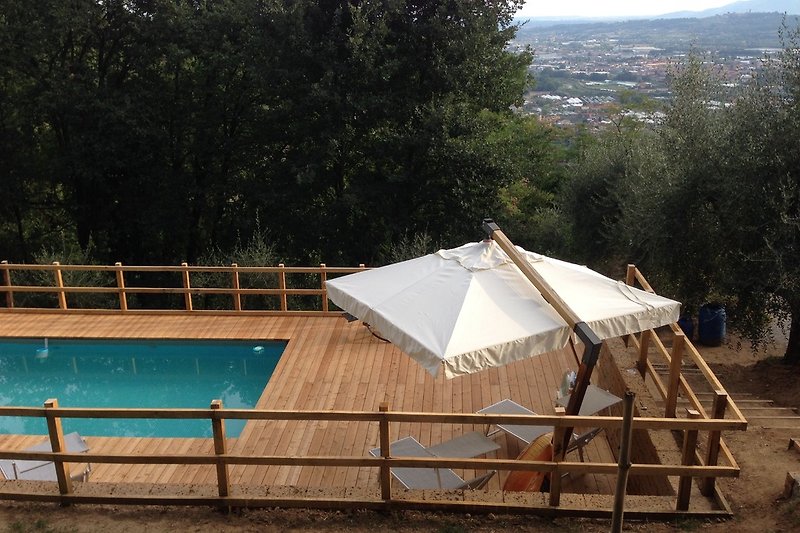 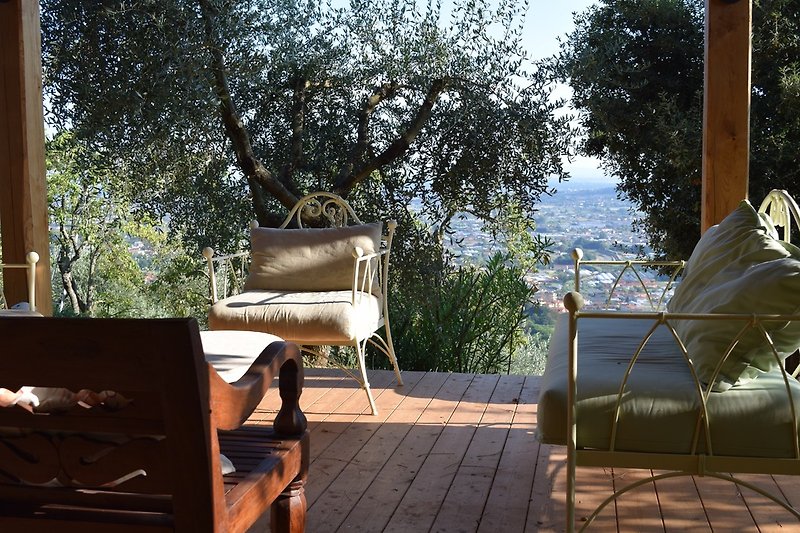 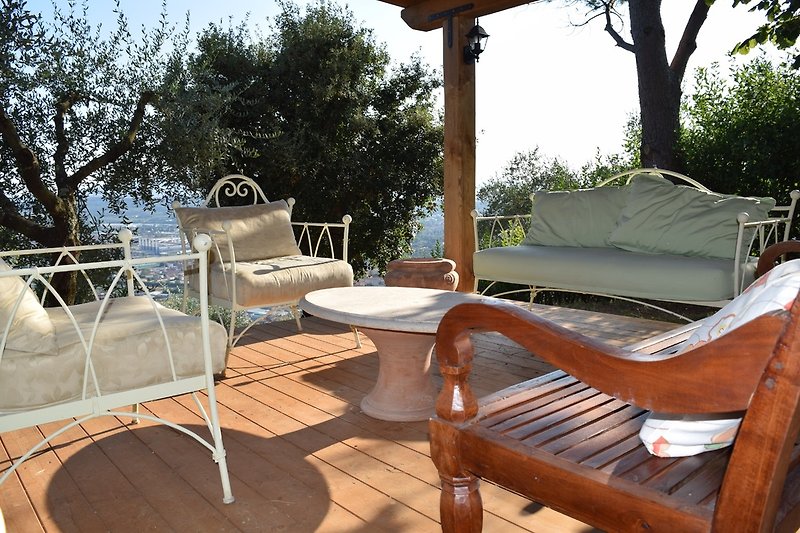 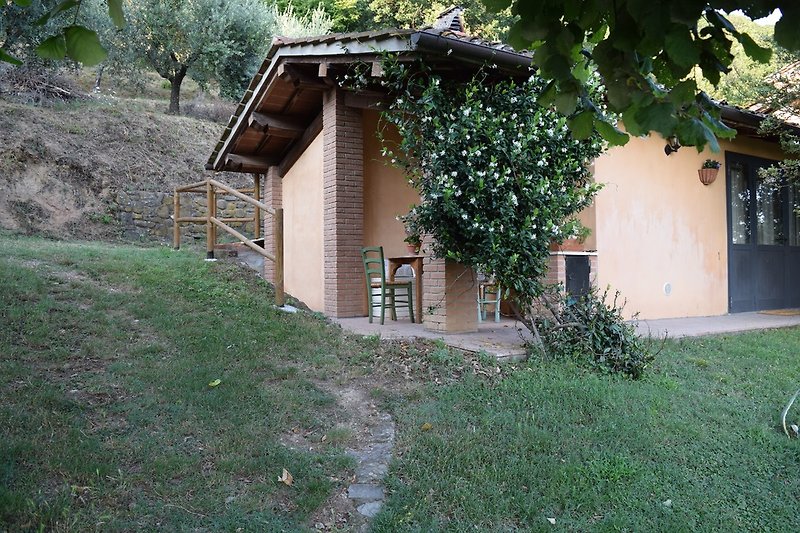 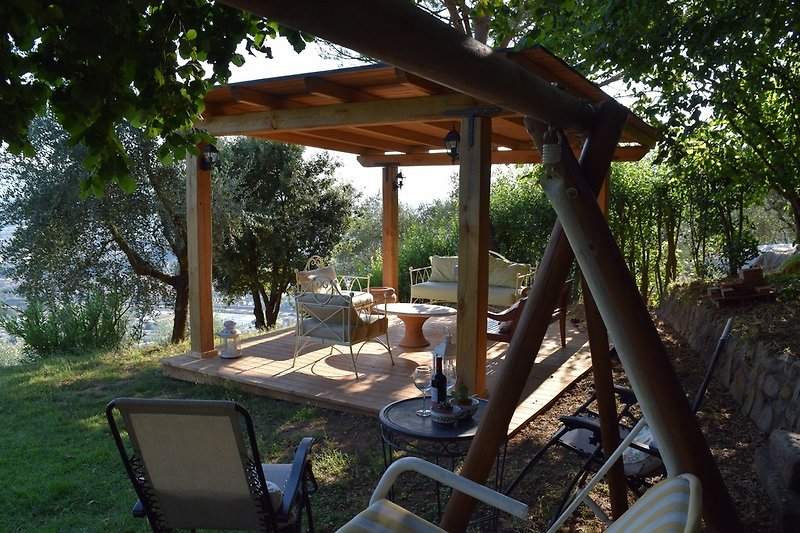 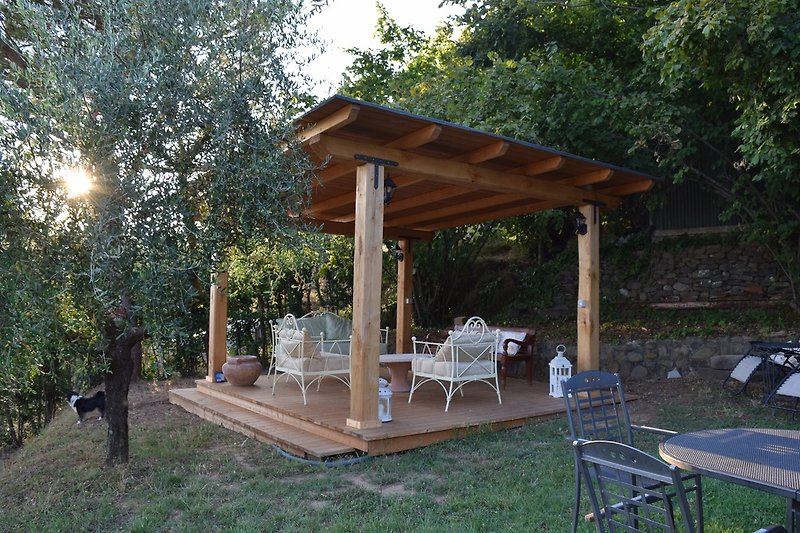 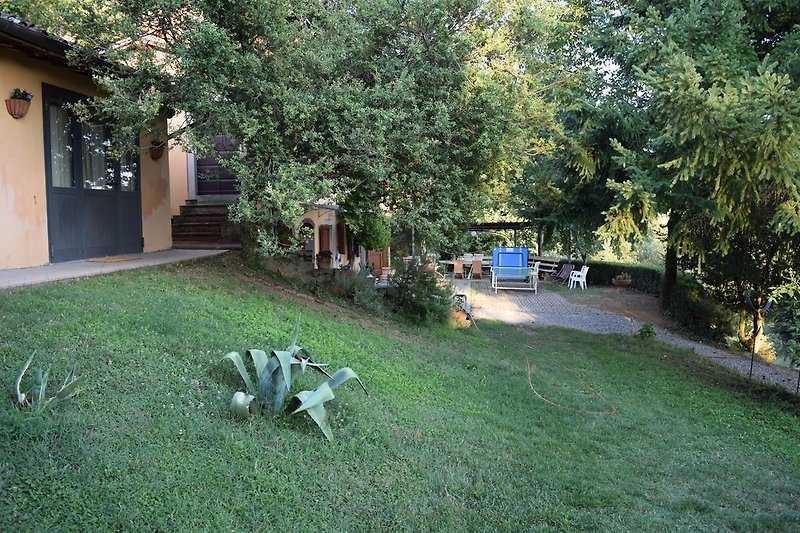 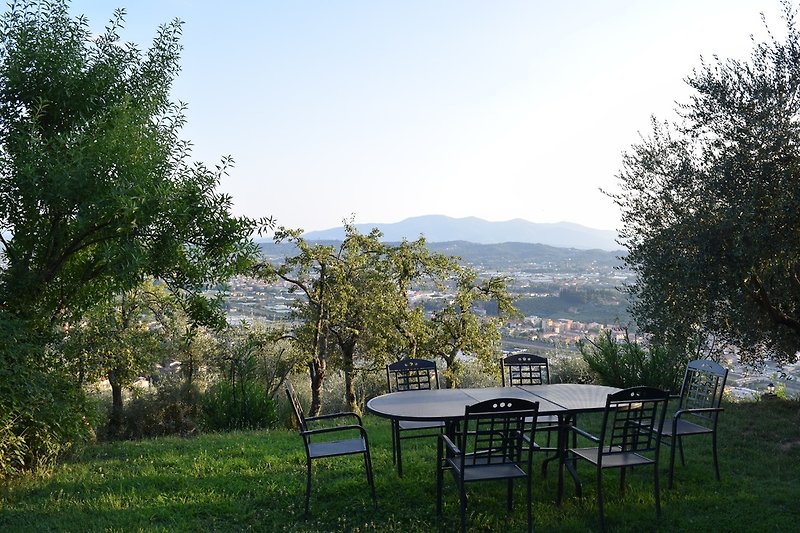 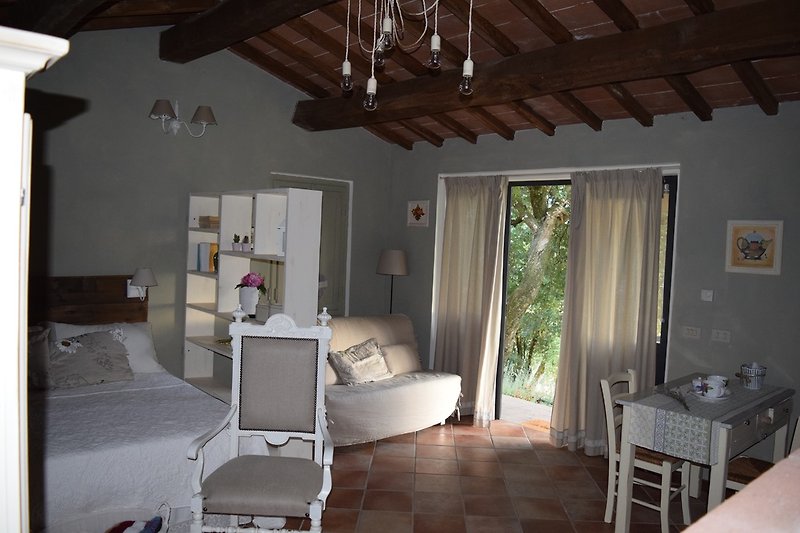 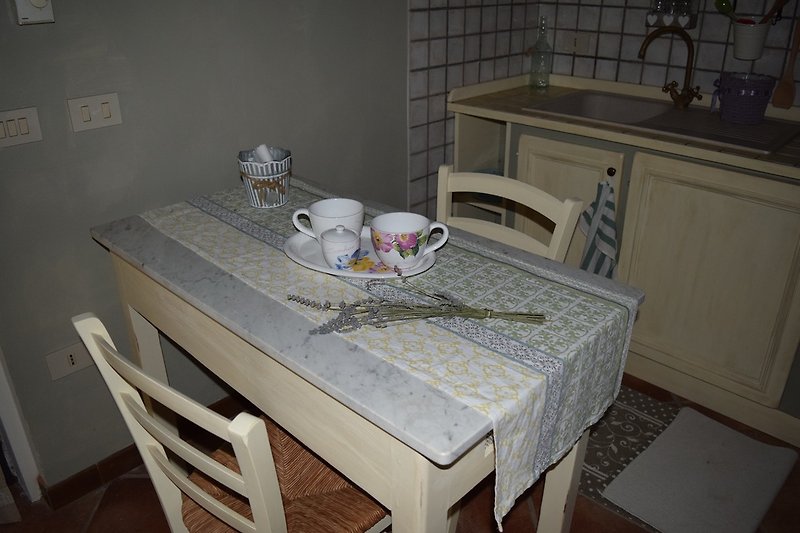 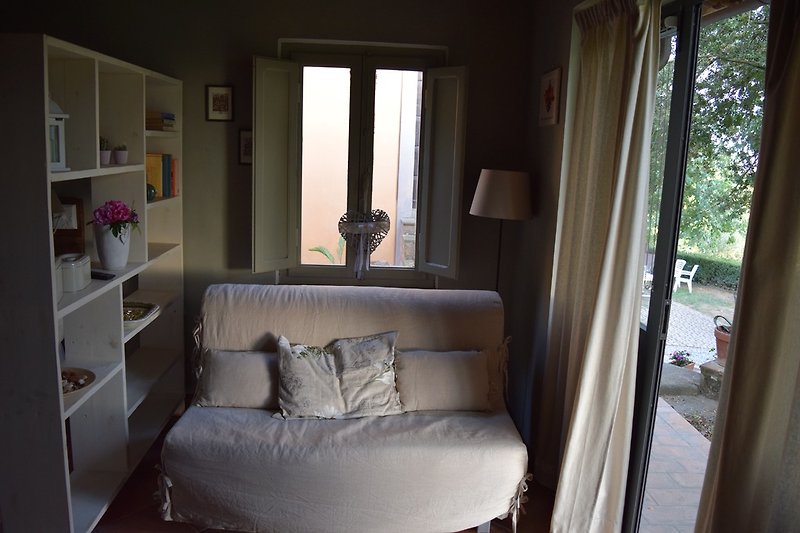 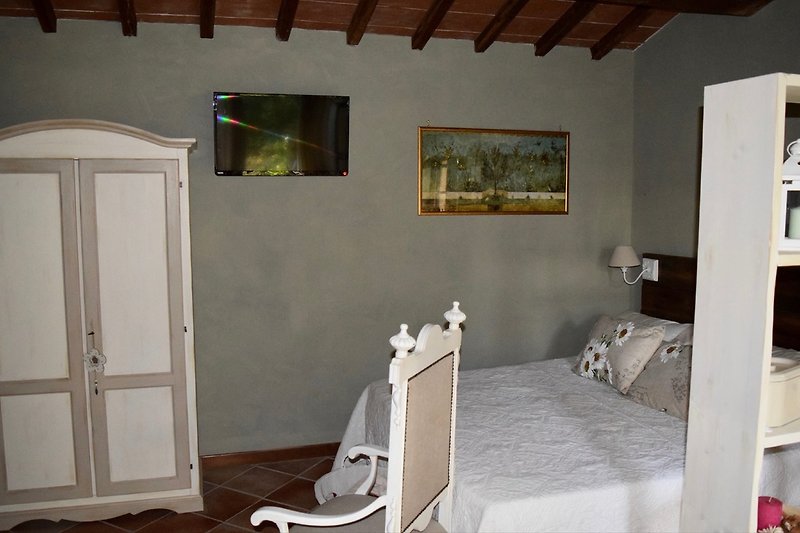 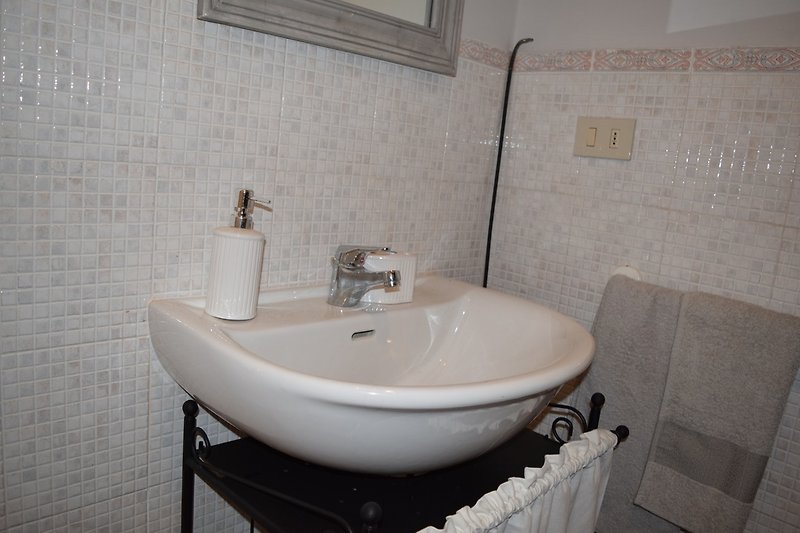 In the holiday region: Tuscany

from 565€ per week
equates to  81€ per night
Price calculator

The house on the hills is a little gem with a wonderful view over Pescia and the whole Valdinievole. Opposite the hill is Montecarlo. By car you are in just 3 minutes in Pescia but at the same time completely immersed in nature.

The small house is ideal for two people but through the sofa bed can also accommodate 4 people.

High quality expanded and renovated and equipped with lovely little things, so the headboard of the bed is an old stable door which was found when renovating the main house and then worked up.

The house is 35 m2 big. The room has on the left the small kitchenette with 2 hot plates (gas) and fridge and a small dining table on the other side is the bed and the sofa bed.

For romantic evenings in spring and fall is just across the bed from the open fireplace.

The shower room is with window.

The house has a terrace with a table to eat outside and the outdoor living room under the wooden roof.

The pool is on the other garden side with beach umbrella, beach chairs and plenty of space on the large wooden terrace.

The garden is meters tall and in the upper part the owners, who live in the main house, have goats.

Pescia (from my blog)
Last night I thought about which village / town or area I could write something. If you live so long you will find many things not so special but there are still endless possibilities here in the area.

This morning, as I watched out the window and on Pescia with my coffee in hand, I live a little on the hill, I realized how beautiful Pescia is.

Pescia is not developed touristically. It is a sleepy town that has everything to be interesting for visitors.

The first settlement should come from the time of the Lombards. Therefore, the name should come, Pescia means the river.

Fiercely contested in the Middle Ages, when Florence and Lucca fought here are still parts of the city walls, a city gate (Porta Fiorentina) with the sign of the Medici family, the cathedral and some city villas.

The large elongated main square is still the center today. This is where the market takes place on Saturday. And on the first Sunday in September the Palio! Here is some information: Palio

But maybe it's easiest if you take a good hour and make a tour.

You can park at the agricultural school in Via Giuseppe Giusti- just before the Porta Fiorentina there is a parking lot on the right. (There you come to the city if you come from Montecatini)

If you are coming from Lucca, follow the signs for the center / hospital and then turn right over the river (at the Pippi car dealership). You either park there or drive to the next traffic light, turn left and you are at Porta Fiorentina.

The Porta Fiorentina with the typical Medici stem was completed in 1733.

Shortly after you went through the gate is on the left a large monastery, inherited 1722-1730. The exterior is very simple in the lush Baroque. A few meters further on the right is the cathedral. The bell tower dates from the 13th century. The oldest surviving part, in the 17th century, it was decided to enlarge the cathedral and the facade remained unclad for a long time from the typical red stones.

Opposite is the small baroque church Maddalena.

Keep to the right after the cathedral and go down the small alleys, a bit hidden you will find the Romanesque-style church s. Michelino. The roof is still made of stone slabs today and it is one of the oldest churches in the city. You will find in this district different city villas, all inhabited and therefore not to visit.

If you arrive at the street where you can see the bridge in front of you and at the height where the small road leads to the hospital on the right, there is a big house on the left, try if the front door is open. Here Pope Paolo III lived in 1541 during a visit to the owner's family. The courtyard is still impressive!

Head towards the Kankenhaus and, walking around the building on the left, you will pass through the old city gate 'Porta del Giocatoio' and you will be in the district (Rione) S. Francesco. This part of Pescia was called the meadows (Prato) and was outside the city walls.

Today is on the left side of the modern hospital. It is interesting to know that there is a hospital here since the 13th century. Obtained is on the right side of the road, the small very simple church which is already mentioned in 1327. Inside, on the northern side, there is an original representation of the 14th-century city of Pescia.

At the end of the street on the right is the church (13th century) and on the left the theater (from the year 1717, was destroyed during the war and rebuilt a little carelessly) Just before the church is an old monastery (today it is there Court accommodated) and you can in the courtyard with garden.

You cross the bridge and are in the district (Rione) Ferraia. The ancient part of the city. It's the part that I like the most. The part to the mountain (ie direction Pietrabuona) is the part where once lived the poorer of the city and in the front part are the really big city villas of the rich. From the outside you can see nothing and you can only with organized tours in the villas because they are inhabited.

As you go up the old donkey path to the left of the Palagio, you will come to the large San Domenico monastery between the olive trees. Today there is a retirement home there.

Back down at the church you go into the 'Ruga' - from there you can get through one of the pedestrian passages to the main square.

This price includes the cost of Cleaning and heating .

Wifi 4 euro per day, heating or air conditioning (on request) 5 Euro per day

Pescia is just 3 minutes away by car.

Ideal starting point to explore Tuscany and to enjoy the total peace in the evening.

I, Angelika Meisborn lives and works since 1994 here in Pescia between Lucca and Florence in the north Toscana. Tuscany is a unique landmark in which you will find endless possibilities. Historical cities with a high art history, untouched nature, great lakes, sea, mountains and small medieval villages, you can experience all this and try the unique way to live the Tuscan life.
Since I live here in Pescia for 20 years, in the north of Tuscany and know not only all landlords and objects personally but also the area very well and gladly give you tips for excursions or sightseeing. You want to search for wild asparagus or mushrooms, visit less well-known places, go for a good meal, go for a hike or maybe organize a party? Contact me, I will be glad to help you! 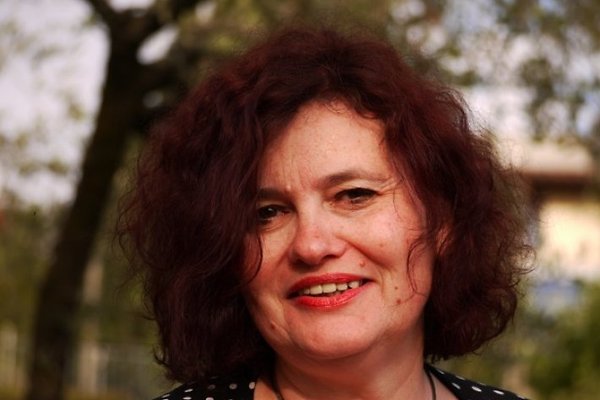 
Provider identification for this advertisement no. 98832

Further accommodations from Mrs. A. Meisborn 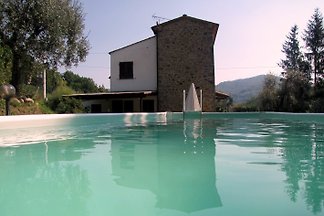 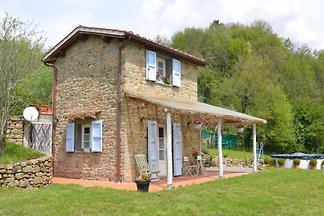 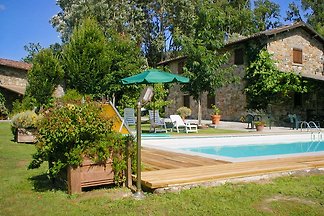