Search
from 86€ per night

In the holiday region: Brittany / Finistere 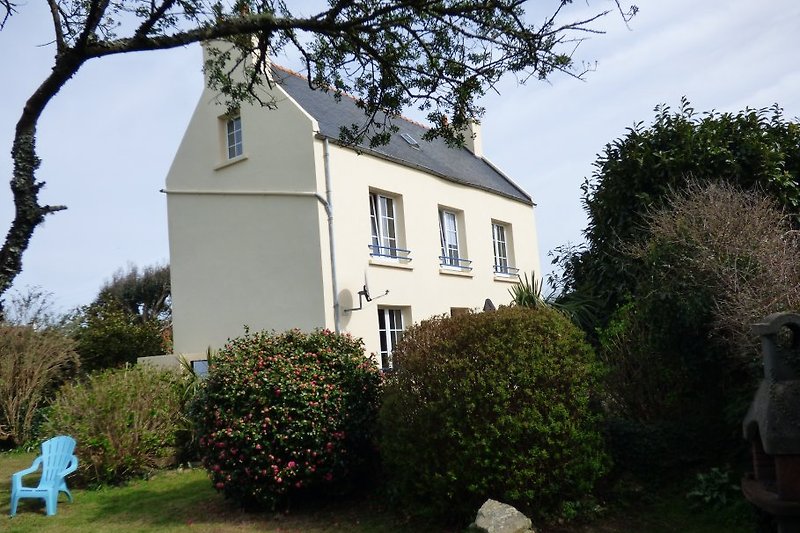 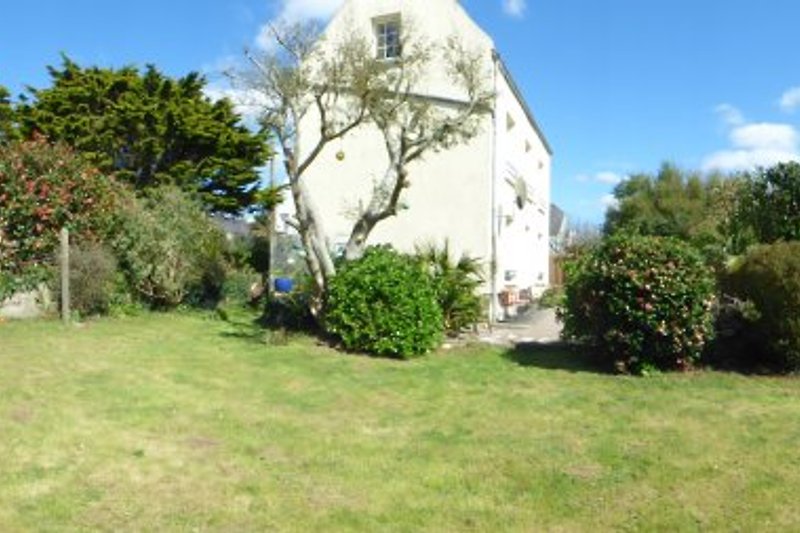 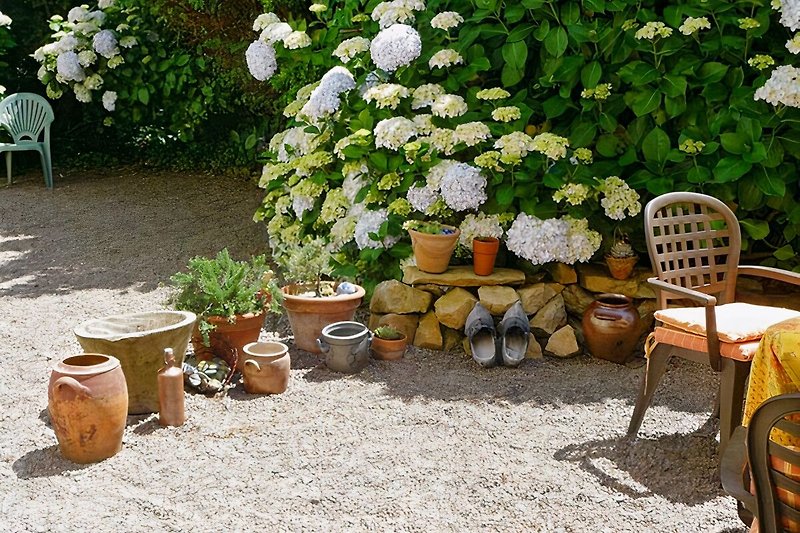 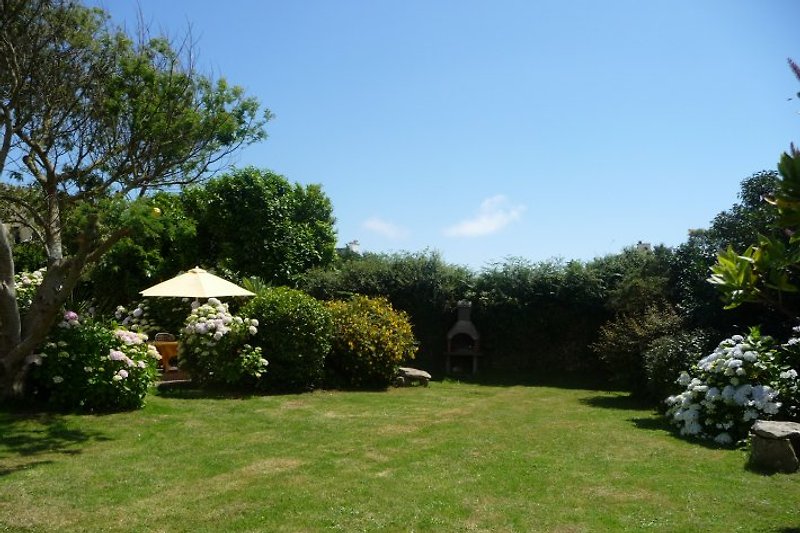 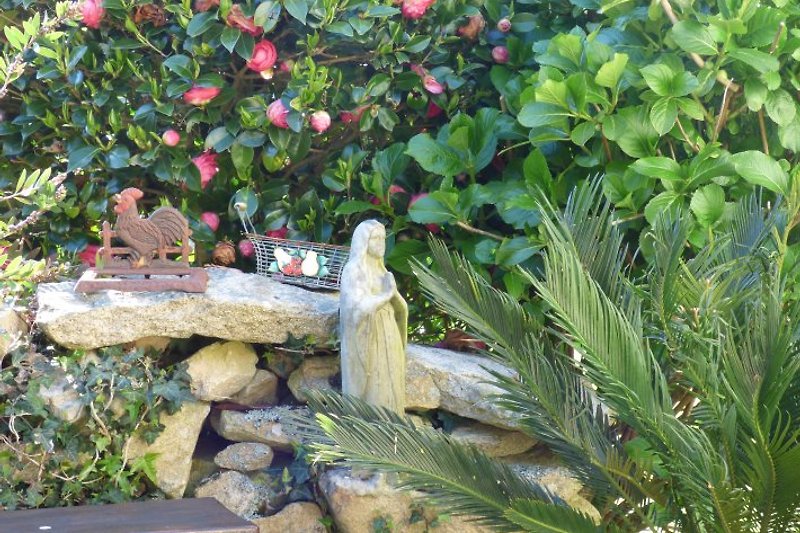 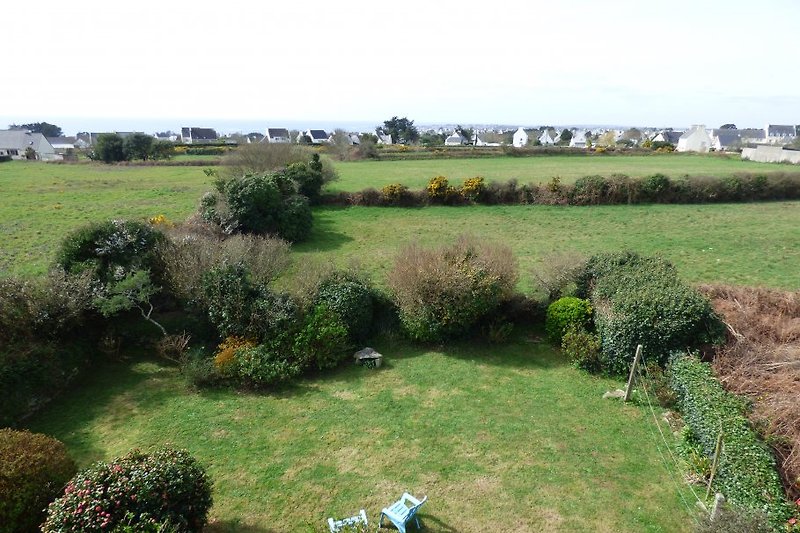 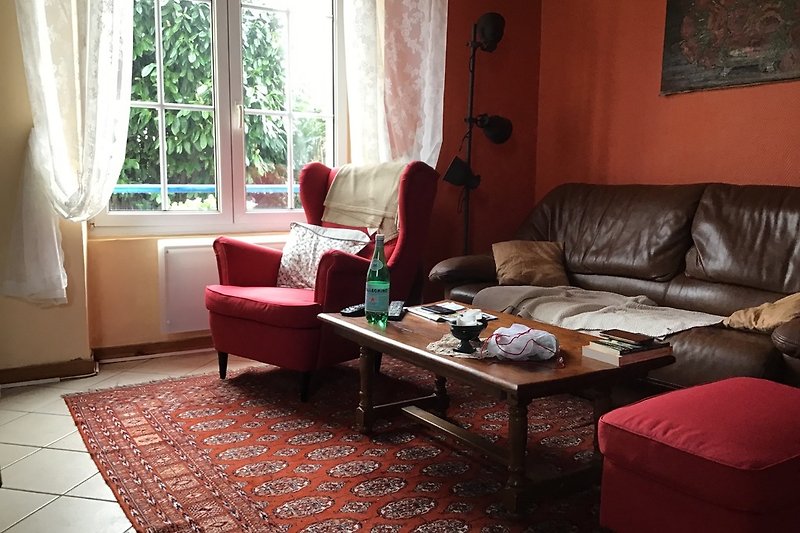 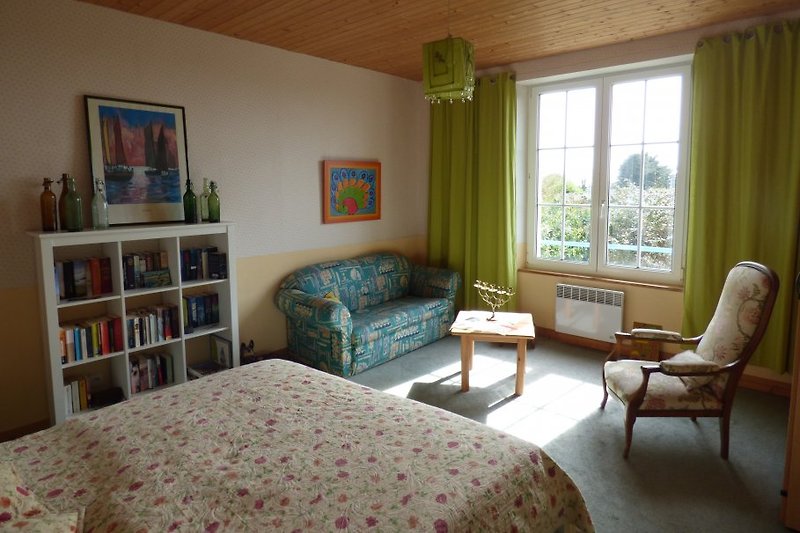 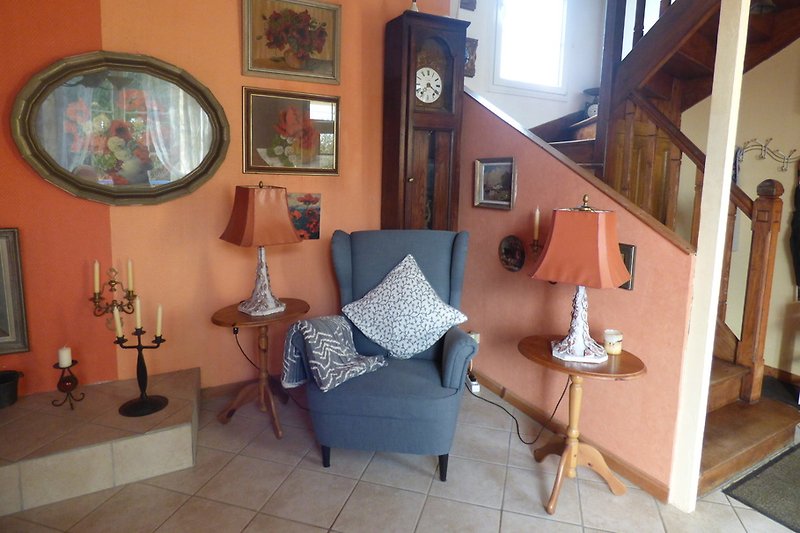 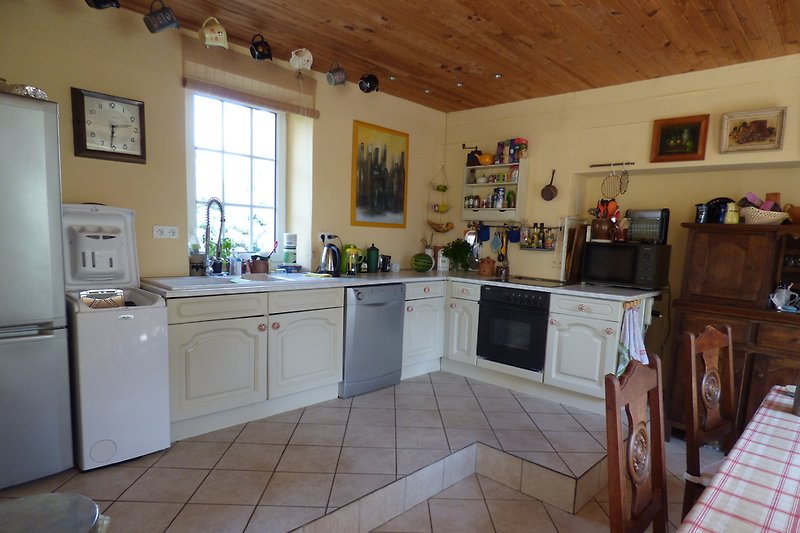 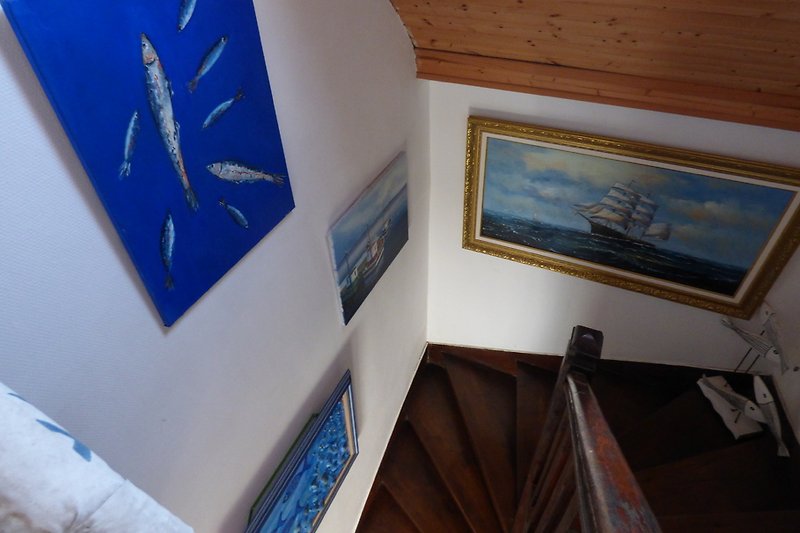 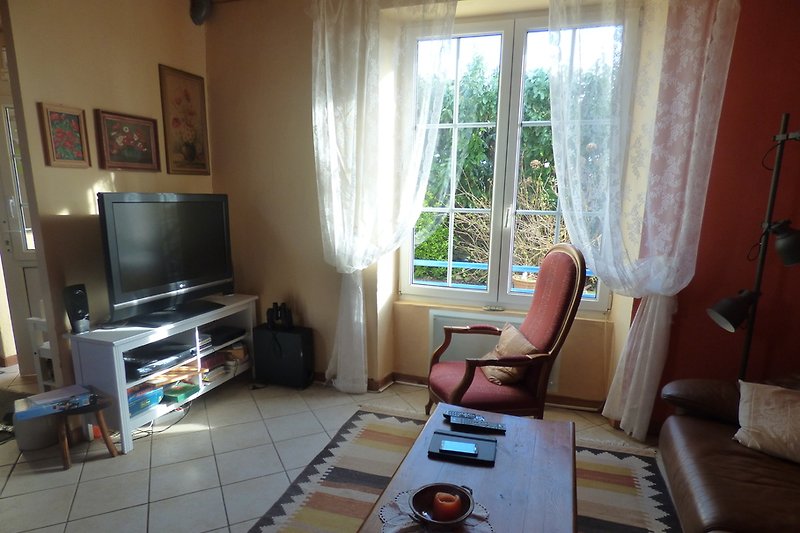 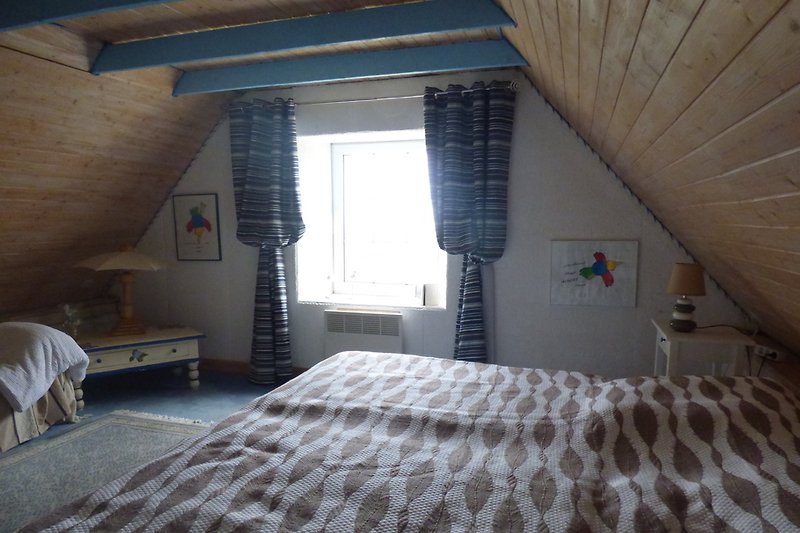 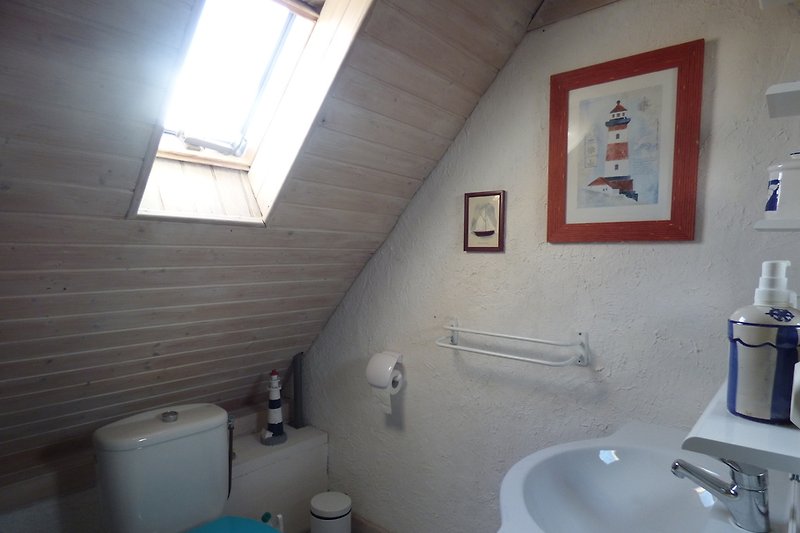 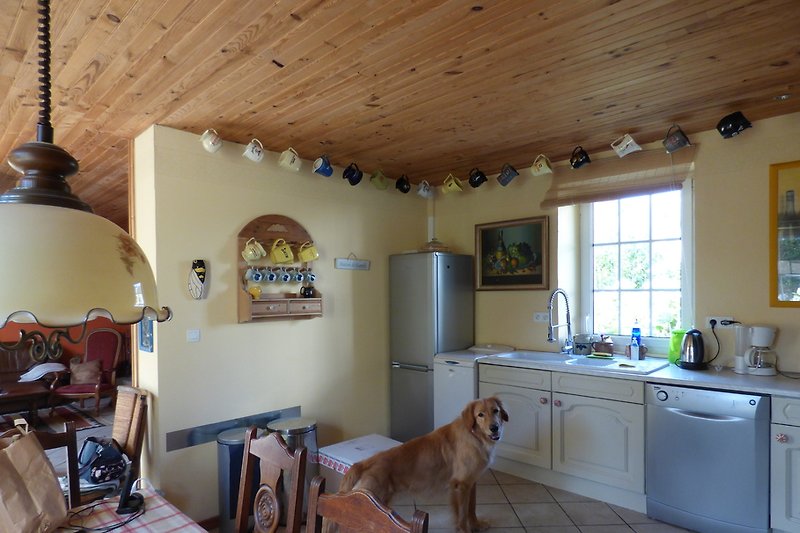 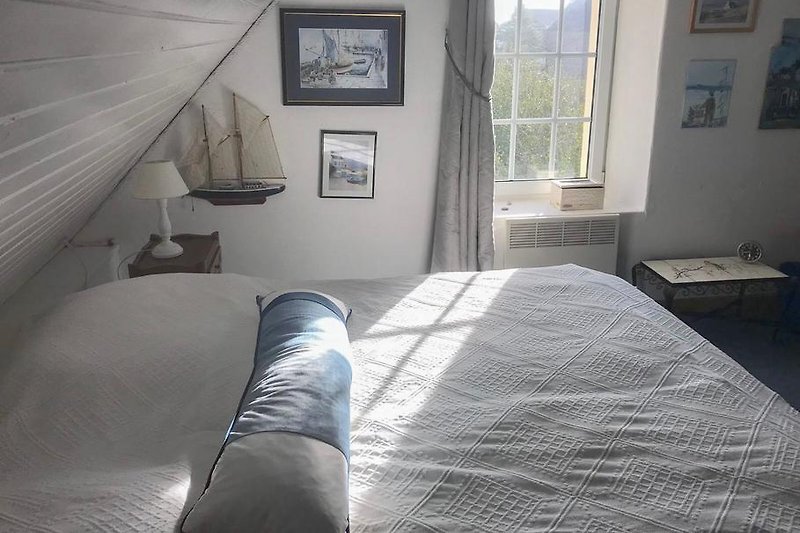 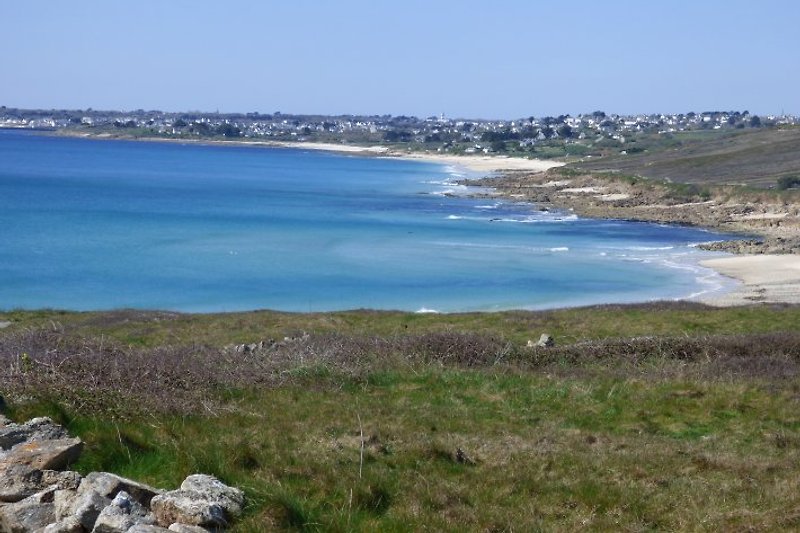 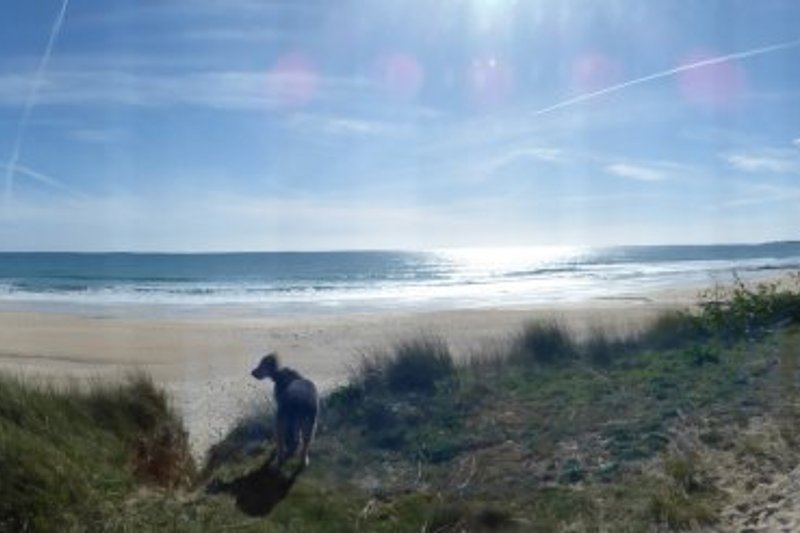 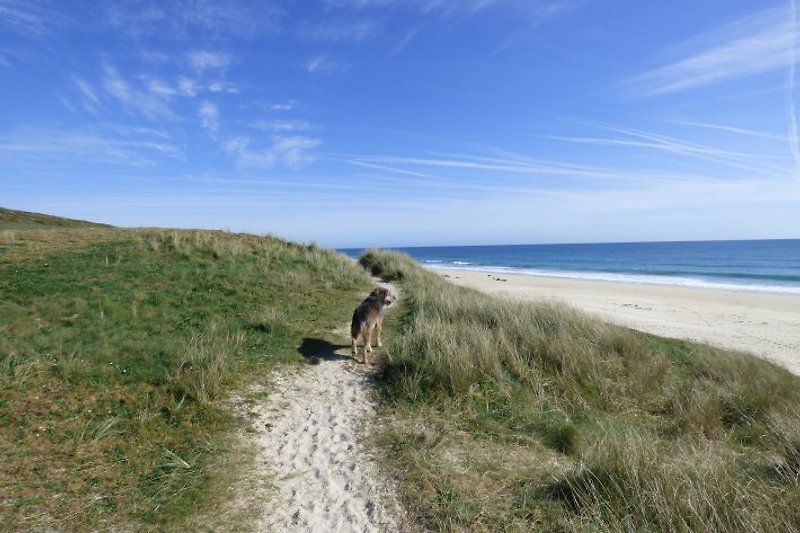 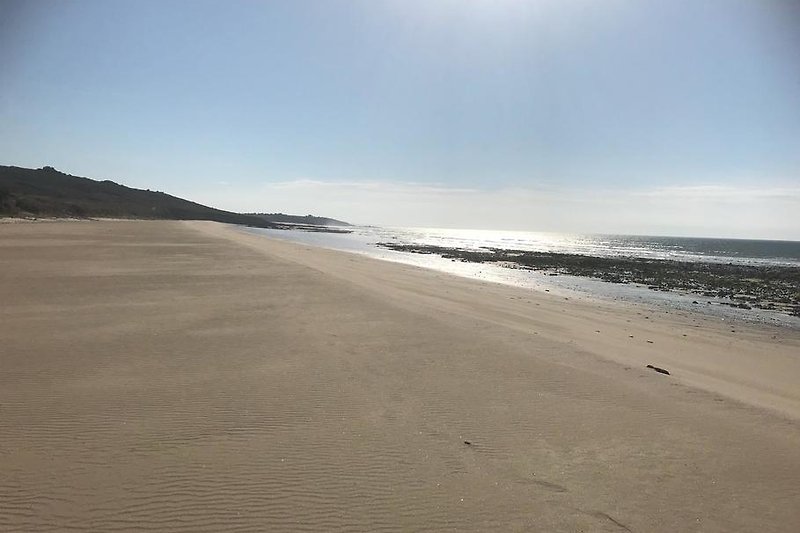 In the holiday region: Brittany / Finistere

from 600€ per week
equates to  86€ per night
Price calculator

Our house is situated at the end of a very quiet dead-end-street. From the first floor you have a magnificent view over the Bay of Audierne. All the rooms are nicely equipped and have a family-flair. The kitchen is downstairs (dishwasher, washing machine – dryer in the garage - , oven, cooler, fridge, microwave) and has a table for up to 10 persons. The living-room is openly connected with the kitchen and has got an english satellite-TV, DVD-player,broadband is available, sofa, 2 armchairs and a fire-place.
1st floor: bathroom with toilet and shower, 1 bedroom with one king-size-double-bed and a sofa (= 1 bed). 1 room is private and closed.
2nd floor: WC, 1 bedroom with 1 king-size-double-bed and a simple bed, 1 bedroom with 2 single beds and 1 sofa ( = 1bed).
The garden is completely separated and nicely decorated. You find a lot of garden furniture there and a barbecue. 4 bikes in the garage are for your use. You can do your shopping on foot, all shops are very close (baker’s, butcher’s, post-office, newspapers, bars). The supermarket is 1 km away and so is the beach. Pets are allowed.
Cleaning charge 90 € and electricity 0,23 cent per Kw
Linen and towels available.
more pictures:ask for more

BRITTANY hundreds of miles of rugged coastline, beaches and small coves elongated bright, countless original fishing villages, canyons and outcrops overhanging heather, that's 'Armor - the country that is in front of the sea'. The 'Argoat - Land of Forests', the inner, green and gold Brittany, traversed by Flußadern with its rolling hills and valleys, as part of the fascinating image of Brittany. The land of constant change, of incessant struggle between wind and rock, the land of poets and sagas, and his own idiosyncratic language, music and art, this Breton exudes country charm and magic and draws the visitor into its spell. Which includes the departments of Brittany Ille-et-Vilaine, Côtes d'Armor, Finistère and Morbihan. The Loire-Atlantique is part of the historic Brittany, which is why we classify it here too. Depending on departure arrival in Germany on the motorway Aachen - Liege - Paris or Saarbrücken - Metz - Reims - Paris. From Paris via Le Mans to Rennes. Some road tolls for cars (as of 2007): Metz - Paris ? 22 (320 km), Valenciennes - Paris ? 13 (220km), Paris - Rennes, ? 26 (270 km). FINISTERE end of the world, Finis Terrae, the Romans called the western foothills of Brittany, where the armor, land of sea and Argoat, country unite the forest. Finistère, which represents more than 1000 km of varied coastline, with picturesque coves, steep cliffs, long sandy beaches, fishing ports and a host of offshore islands. The Finistère is also the land of the mysterious dolmens and menhirs, the many figures Calvaire, the chapels and magnificent steeples. The interior is rich in beautiful landscapes with meadows and heathland, woodland and intensively used farmland. Along the northern coast of Finistère there are great many beautiful sandy beaches, often pleasantly situated between towering granite stones. Popular beaches are found among others at Cléder, Plouescat and Brignogan-Plage. Worth seeing is the old-fashioned in the extreme north east of Morlaix, Finistere, and the fortress meerumschlossene 'Château du Taureau' in the bay. 20 km northwest of Morlaix are the former bishop's town of St. Pol de Leon with a 77 meter high bell tower and the picturesque port of Roscoff. West of Plouguerneau covers a varied coastline with far-reaching into the land of tidal estuaries, the so-called buts. The Aberküste offers solitary dunes, stunning coastal walks and sheltered sandy bays. The westernmost point of the French mainland is the 'Pointe de Corsican', a 50 m high, steeply sloping cliff, 30 km west of Brest. In the heart of Finistère rise the Montagnes Noires and the Monts d'Arrée, two ridges that are part of the natural park 'Parc Régional d'Armorica are'. Beautiful, often promising paths lead through the park. From its highest elevation, the Menez Hom () 330 m, offers a magnificent panorama. North of the Monts d'Arrée 'focus on the most impressive' Enclos paroissiaux '(walled parishes with churchyard ossuary and Calvaire). Compared to the rugged, often primitive beauty of the southern North Finistère Finistère is softer and lighter. A mild, sunny climate makes the south coast almost Mediterranean flair. Among the best known landscapes of Brittany, the peninsula Crozon counts between the Rade de Brest and the bay of Douarnenez. It is also seen as Brittany 'in miniature', as they gathered much that matters to most beautiful and typical of this area: steep cliffs coast with heavy surf and rocks embedded in sand coves, spectacular scenery. In three directions, the rise of Espagnols Felsenkaps Pointe, Pointe de Pen-Hir and Cap de la chèvre, from which arise the gorgeous panoramic views. At the Pointe de Dinan wind and waves have formed a rock arch. Crozon peninsula stretches south of the headland Cap Sizun into the Atlantic. At its head lies the spectacular Pointe du Raz, a powerful, up to 70 m high rocky ridge. The Pointe de Raz surrounds the north Pointe de Van a legendary Sand Bay, the Baie des Trépassés. Also visit the bird sanctuary Goulien on the northern flank of the Cap Sizun (Visits in mid-March to August). Southeast of the bustling port city Audierne opens the widely overlooked Chalets with flat, endless beaches, dunes that run about 25 km to the Pointe de Penmarch. Equipped with rich, maritime heritage, opens Plouhinec thanks to its 8 kilometers of coastline with numerous sandy beaches lie the Atlantic. An ideal place for windsurfing, surfing, kayaking, fishing, and for the first stage in Cap Sizun on Sonnwindroute, invites you to the picturesque little port of refuge Pors - Poulhan to pause, time to enjoy the wonderful, fresh sea air . Poulgoazec At the foot of the page you will find the finest seafood products, including the famous "bar de ligne" (bass) of the Raz de Sein, which are sold at the auction by 16 clock. The fishermen then unload the precious blue lobster, prawns and crab and turbot, monkfish, Roche, pollock, and is so esteemed invites you to his religious heritage (2 bands and 2 churches), his picturesque little hamlet, fountains and Explore washing places, as well as the works of famous sculptor René Breton Quillivic all witnessed a rich and preserved territory of the municipality provides, inter alia, the most interesting archaeological finds of Finistère and is the setting of active excavation campaigns. From the passage grave at Pors-Poulhan to the Dolmen (Neolithic of Pointe du Souc'h), past the grotto of Menez Dregan (Old Stone Age), relax a journey of 500 000 years before our on the beach or to take discovery of paths on sea or the river, between the heather and gorse, too, on horseback, by bicycle or with a micro-light aircraft, is an invigorating program of stay - of course, still authentic and with great expanse of it.

prices are - per object - at an occupancy up to: 6 Persons

Since 1985 I know Brittany and also the Sü dream of own house where I was in 1999 what you will find in the house was created by us in their own work, and the garden was designed by me and is almost unbelievable how fast everything grows there and thriving. My Breton friends and neighbors who showed me everything and I also unterstü are very happy there and enjoy the air and the sea, and our dogs feel and felt there always very well. I hope I can bring you in my house, Brittany a little closer and also hope that you will feel at home there.
Kenavo
Irene Stender 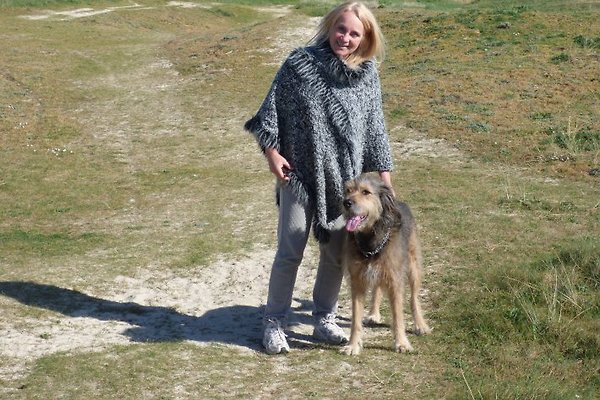 The Holiday home has 25 Reviews.

from Jacqueline K. from CH-5075 Hornussen

from Iris B. from Rheinland/ Pfalz

recommend for: holiday with pet

from A G. from Düsseldorf

from Gabriele B. from Merdingen

from Manuel from Enger

from Astrid V. from Hannover

from Harald G. from Kleve

from Camille F. from Kleinbettingen

from Petit Breton from Bad Arolsen

from SW from Konstanz

from Nickname from Hamburg 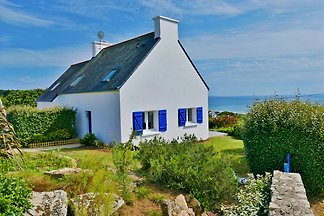 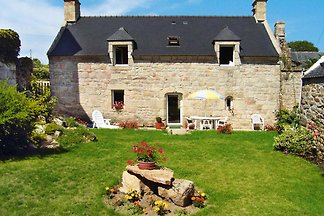 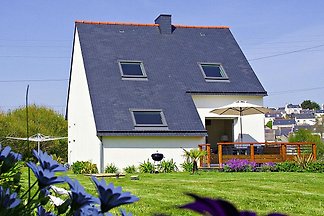