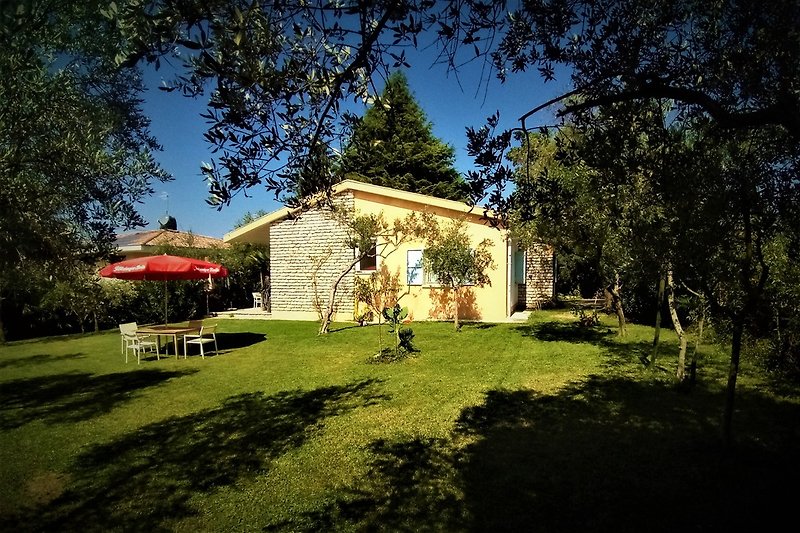 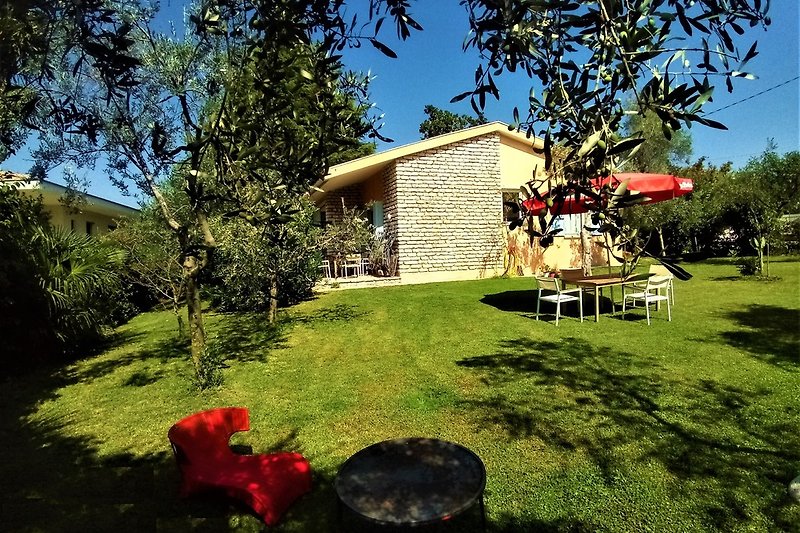 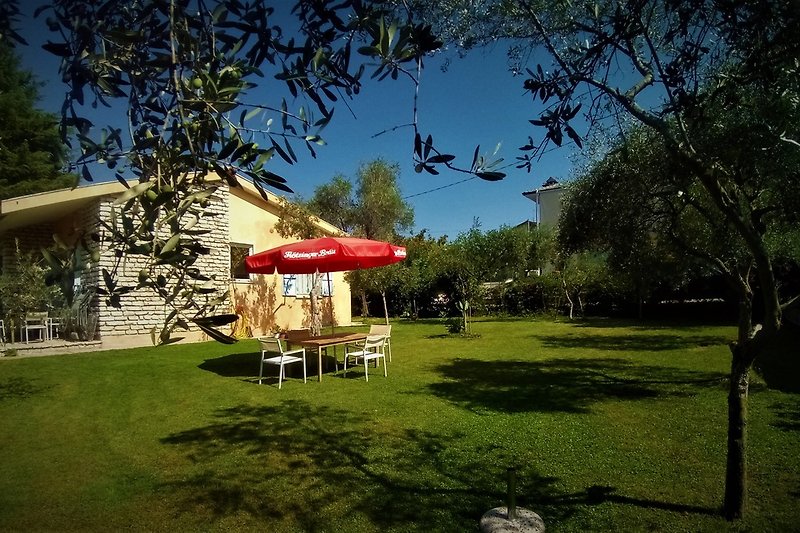 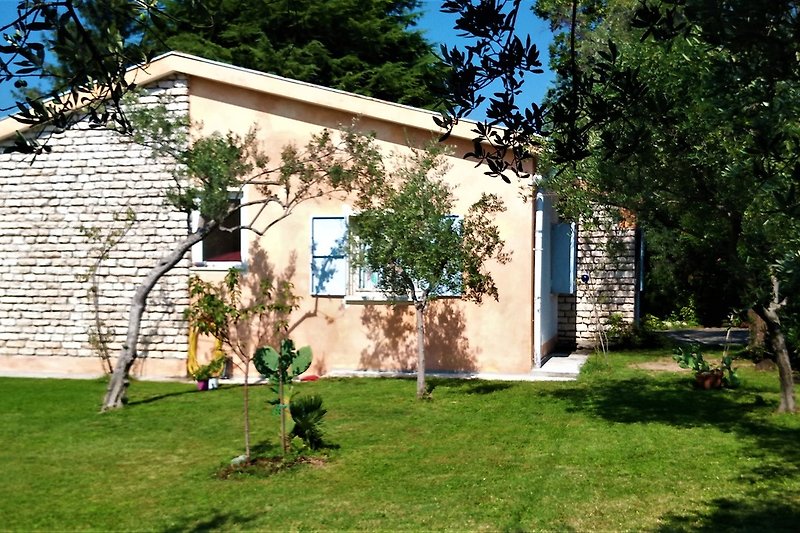 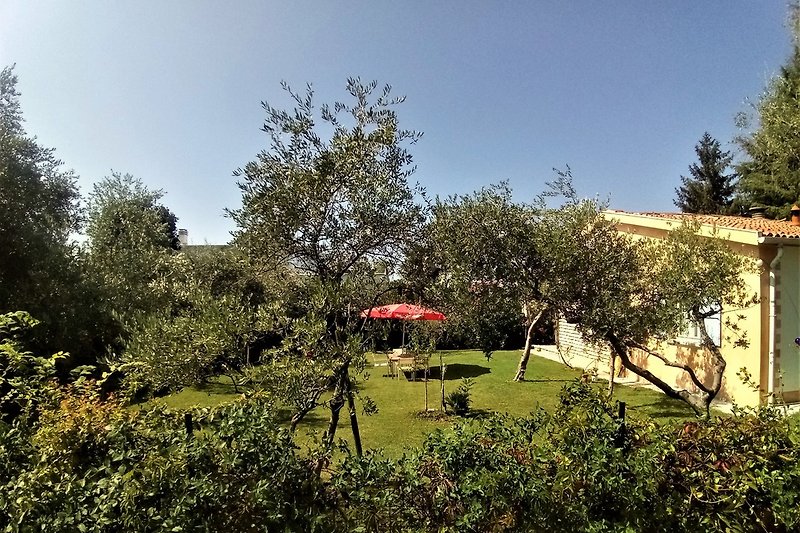 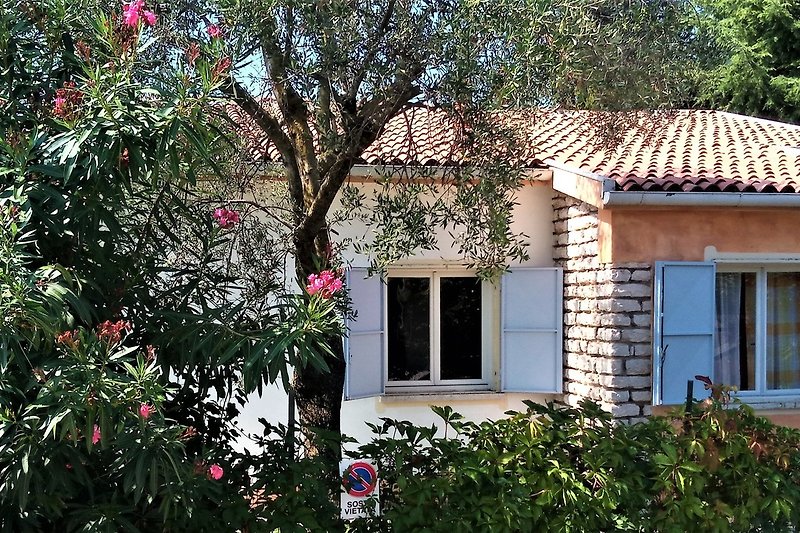 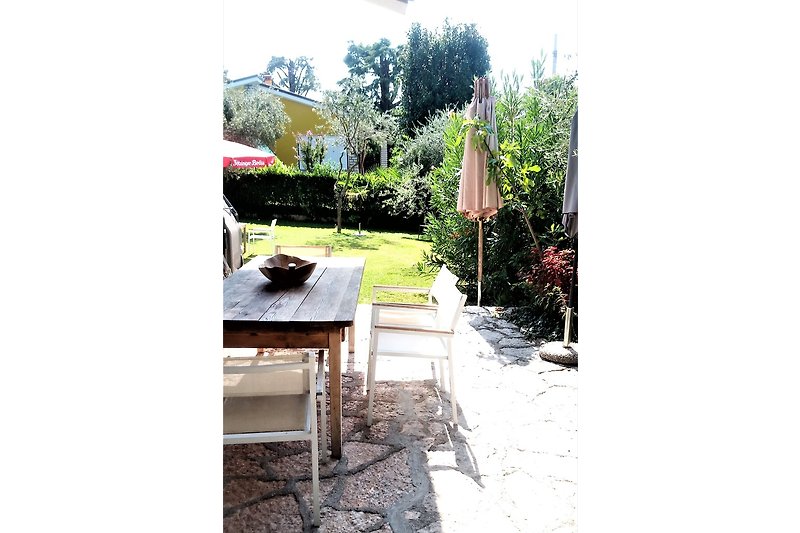 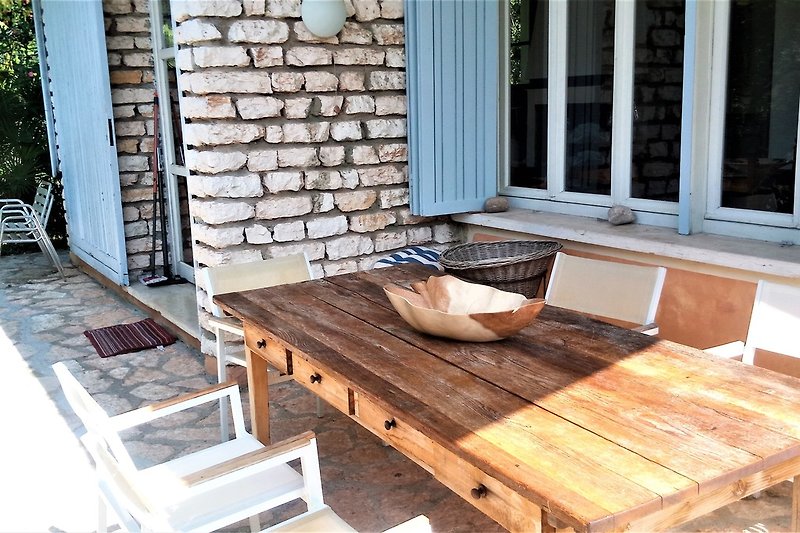 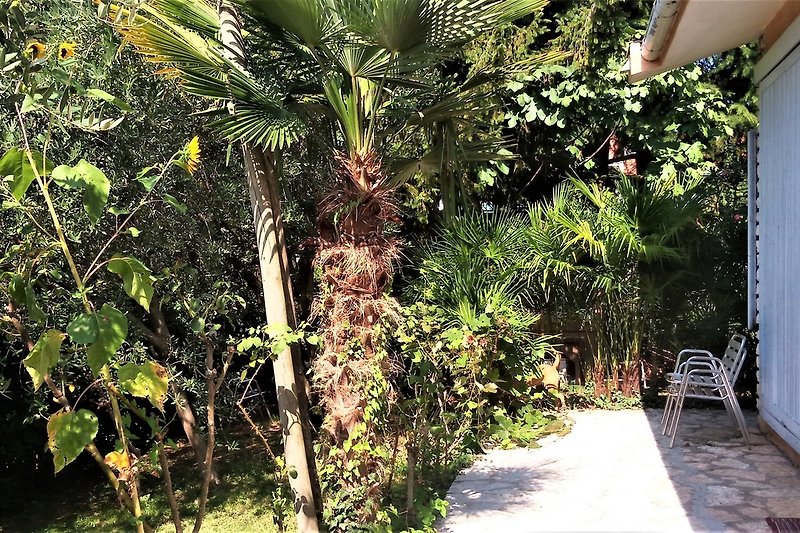 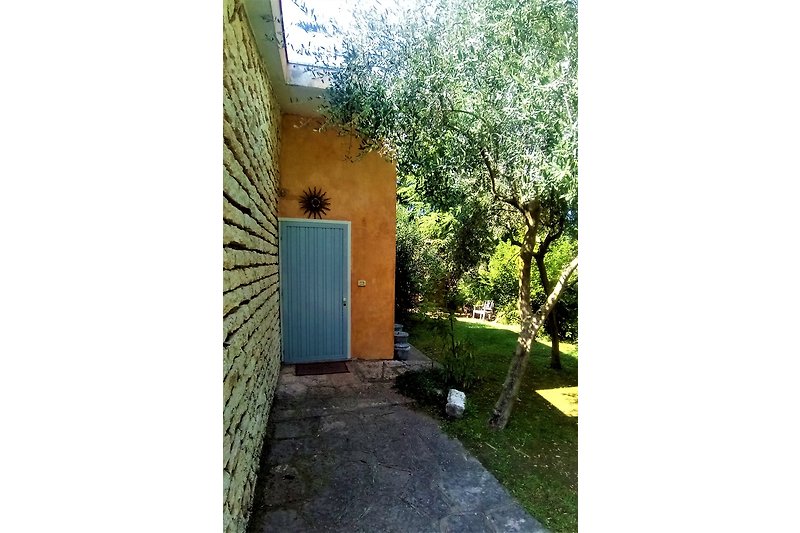 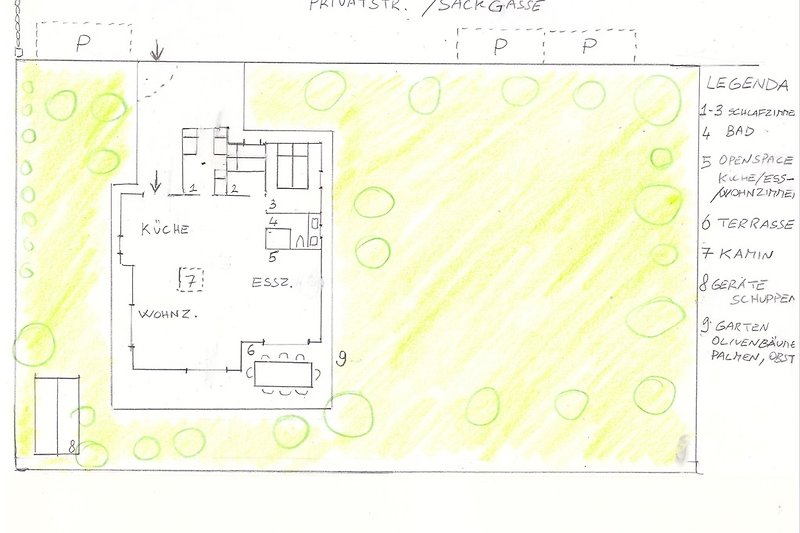 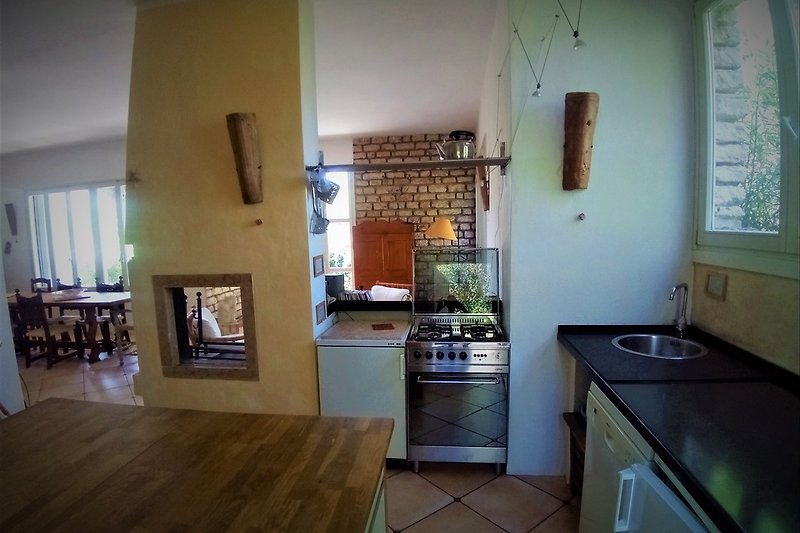 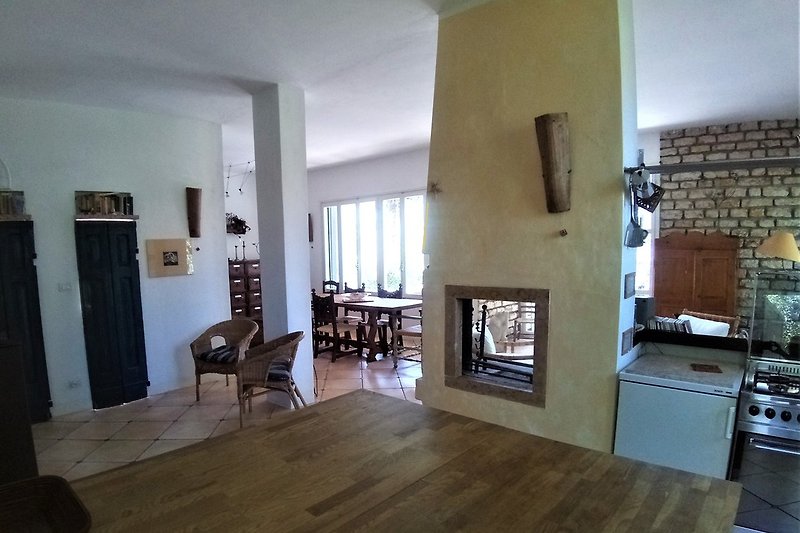 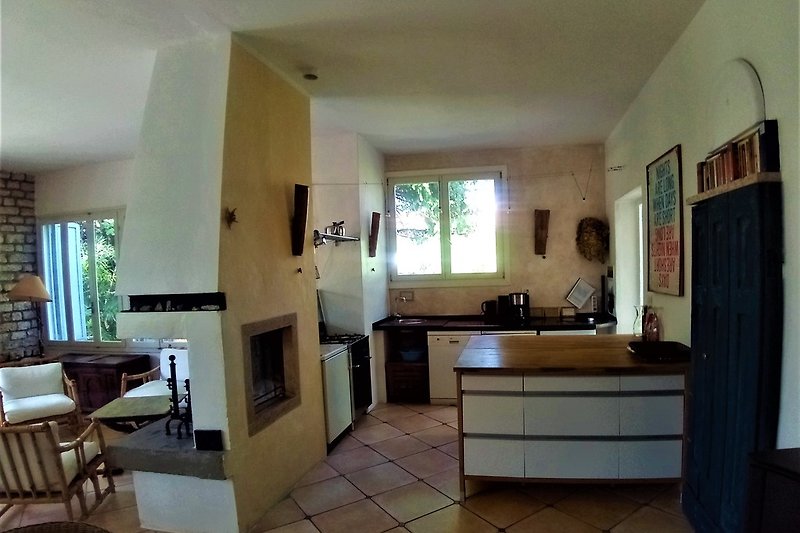 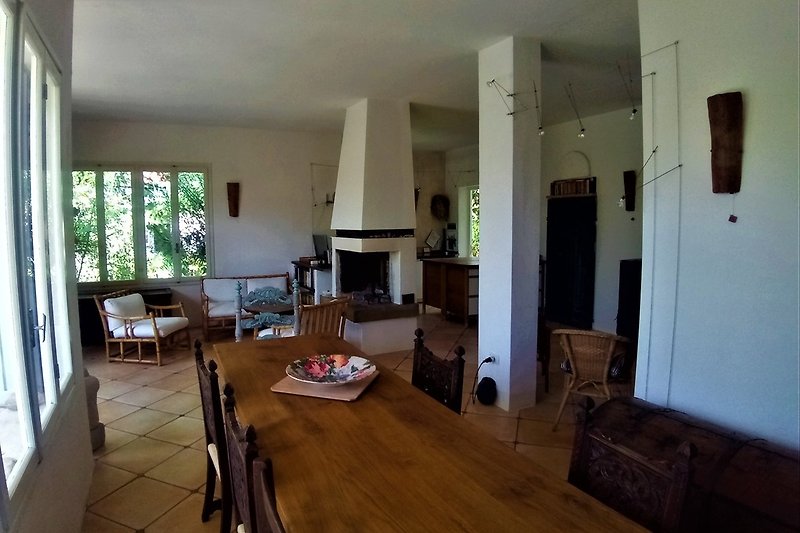 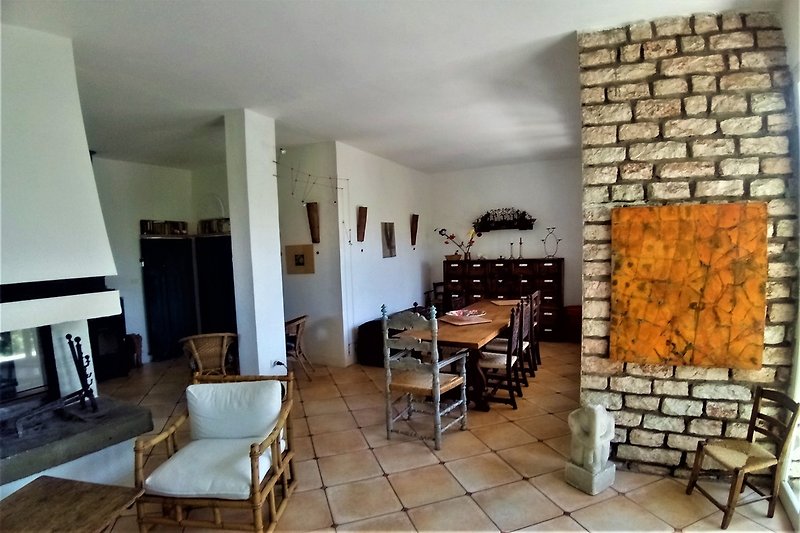 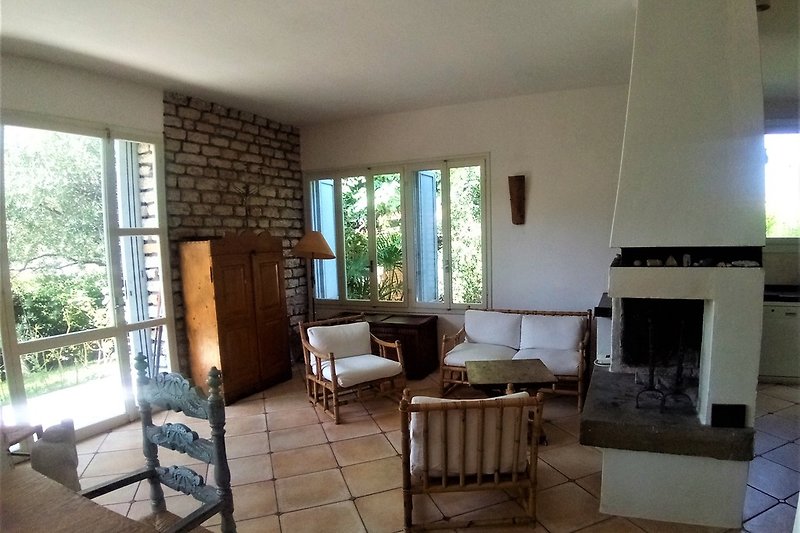 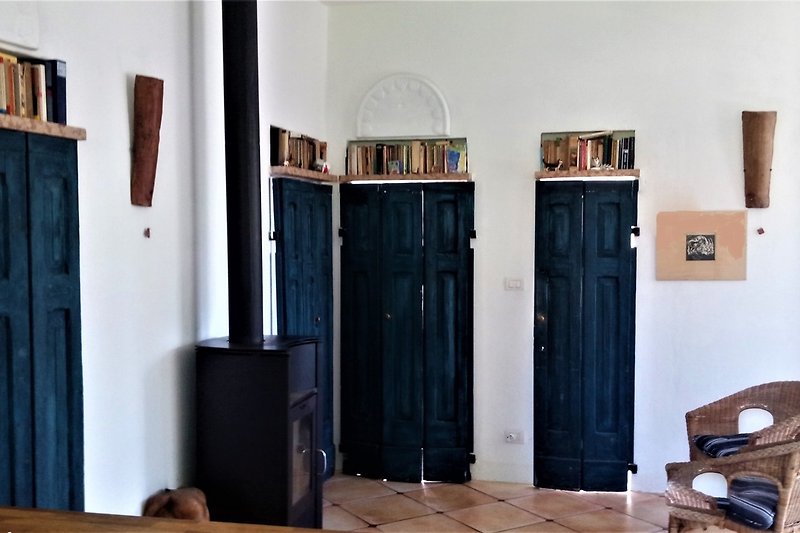 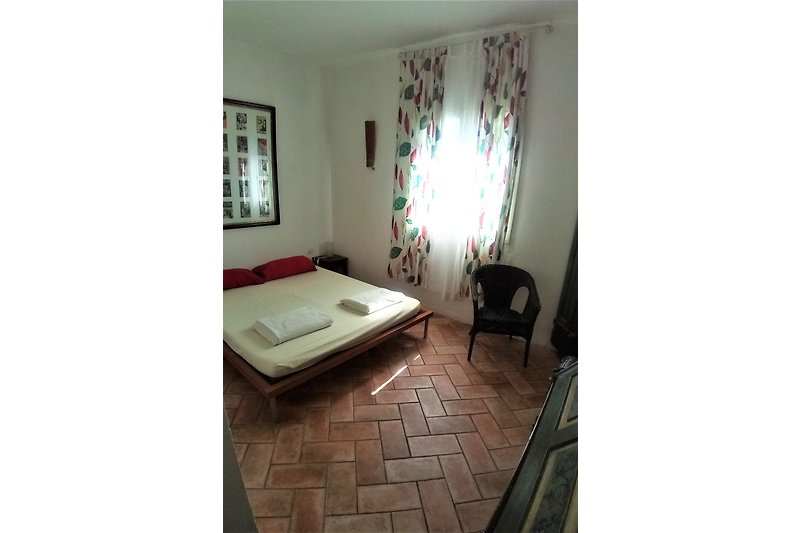 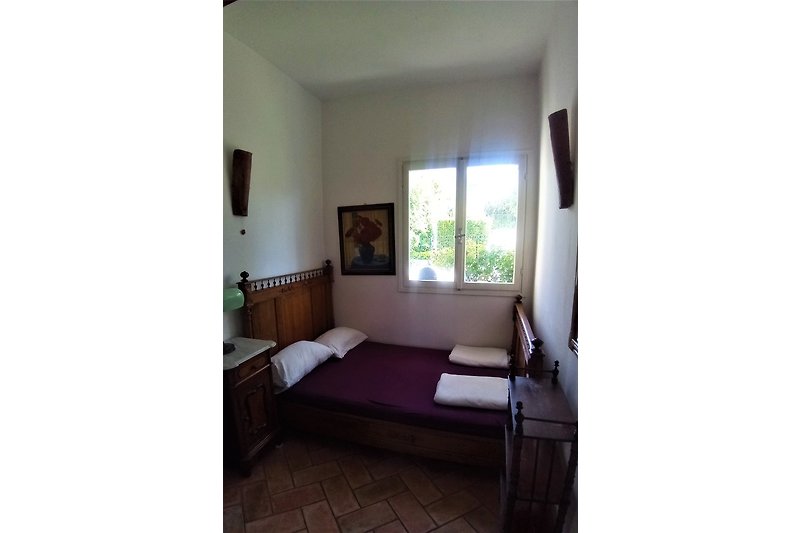 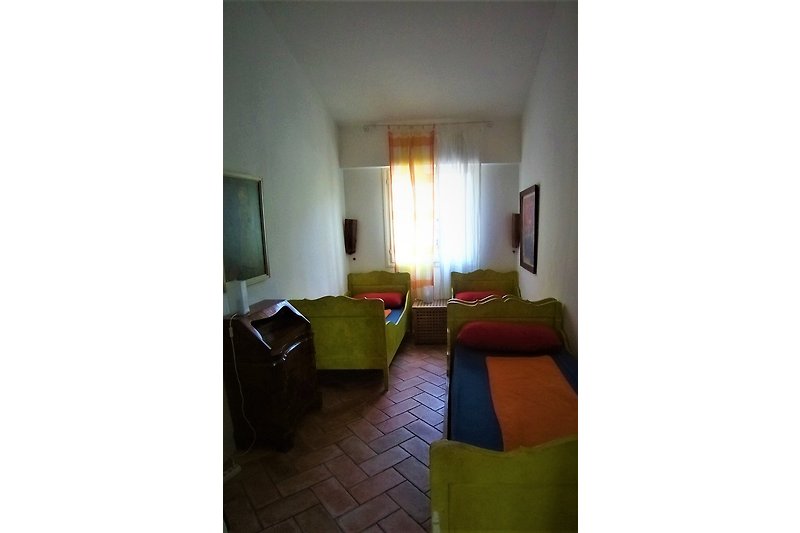 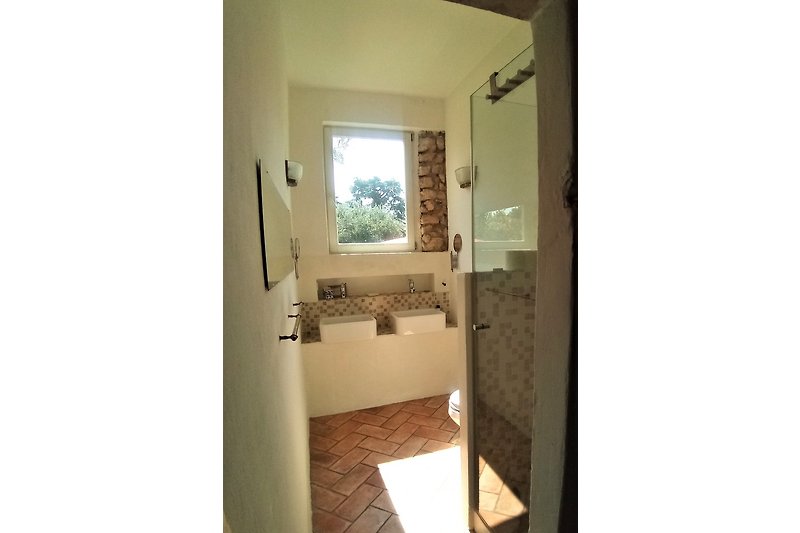 The house outside: is at ground level, outside partly built of natural stone, partly of brickwork in terracotta spatula technique. Light greyish-blue shutters on an orange-ochre wall background in the lush green of the garden (approx. 950 m2), in front of the blue of the lake let the house shine in the colours of the south. The S-W side to the lake and the N side of the house have large glass fronts. A 4m2 terrace door leads to an approx. 25 m2 large, partly covered terrace, 150m as the crow flies towards the lake. The surroundings: colorful lake, hilly landscape. The garden has about 950 m2, the large part consists of a play and sunbathing lawn lined with olive and fruit trees
The house inside: Approximately 50 m2 of light-flooded open space are divided by an open fireplace into an open kitchen, dining and living room area with large glass fronts to the terrace. The interior is partly modern, partly antique and very personal and imaginative: the landlord has replaced all modern room and cupboard doors with old Venetian doors and shutters. The kitchen has 2 refrigerators, a Bosch Super Silence dishwasher, a washing machine and a coffee machine, there is a whisk and an iron. All the dishes, pots and other kitchen utensils are stored in a large kitchen island. The centre of the house is a spacious, cosy sitting area around an open fireplace and a Swedish bull stove and a long antique monastery table with 8 antique Sicilian monastery chairs and a high chair for children
Bedroom equipment:
Around the large central living/dining room there are 3 bedrooms, all towards the hinterland and therefore in a quiet location: a 3-bed room with 3 same colorful country house beds for the children, and two double bedrooms, the small room has a beautiful old French and therefore small double bed, the other one a modern bed with extra large latex mattress for the giants from the north! There are plenty of blankets for summer and winter. There are also antiques in the bedrooms.
All antiques are restored!
Bathroom equipment:
the bright bathroom has 2 separate washbasins, 1WC and a large glass shower cabin from which you can look through the large window into the garden. The photos show the house very precisely, both inside - please always orient yourself by the fireplace to understand the layout of the large central openspace - as well as outside - the photos describe a full tour around the entire house - the house is surrounded by the fireplace
The house is located on a private road, where you can park your car safely in 3 parking spaces along our house (see the blue "P" signs).
The whole property is fenced in (if you have a pet with you) and the area around the house consists of a lot of one- to two-family houses with large gardens, so it is a purely residential area. Nevertheless, the house is close to the centre (400m), close to the beach (200m) and with a supermarket in approx. 80m distance you are well supplied with everything you need for food and household.

NEARBY PLACES AND ACTIVITIES:
Nearest airport:25km Catullo di Verona
Next beach: 200m walk from the house towards Cisano and Bardolino
Nearest ferry: 1km at the port of Cisano or Bardolino
Nearest train station: Peschiera:10km
Nearest motorway: Affi-A22;Peschiera-A4 -10km
Next hospital: Peschiera del Garda;Next pediatrician: 150m from the house
Next bar:1km
Next ski possibility: Monte Baldo Prada(Brentonico):30km
Next golf possibility: Marciaga del Garda 10km
Nearest Restaurant: Palafitte directly on the Lago di Garda 0,5km
Walk from the house to the lake 150m: to the left in about 200m= "Lido di Cisano" (large sunbathing lawn+2 bars), to the right in 100m pebble beach+in 300m sunbathing lawn at the village entrance of Bardolino, in km direction Garda large bay at the end of the village

Bardolino is situated on the south-eastern shore of Lake Garda, which with its Tuscany-like olive, wine and hilly landscape is a special natural, bathing, surfing and sailing paradise
The village itself is genuinely Italian in architecture and landscape with widely ramified streets made up of narrow, colourful rows of houses and spacious, expansive squares. Bardolino has 2 ports, no. 1 in the centre of town, no. 2 in Cisano di Bardolino.
Strategically extremely favorable Bardolino is center of all worth seeing cities of Northern Italy:
Bardolino's position in relation to the following small and large towns of northern Italy worth seeing
East: Verona 25km, Vicenza 70km, Padova 90km, Venice 150km; south: Bologna 120km, Firenze 220km; west: Milano 150km, Cremona 150km, Brescia 70km, Mantova 50km, Ferrara 70km, Parma 85km; north: Bologna 120km, Firenze 220km: Trento 60km, Bolzano 180km, to name only the most important historical cities in the area
Furthermore, Bardolino is situated in front of the Monte Baldo massif (up to 1800m high, 30 min. by car), which offers all the attractions that mountain lovers love, climbing, hiking, mountain biking and even paragliding. Fantastic views of the lake and of the steep mountain ranges around Brescia. The landscape is extremely attractive and green, so the surroundings of Bardolino offer everything that nature has to offer between water and mountains. The whole range of water, hiking, climbing, cycling, golf, tennis, sports, even paragliding, white water rafting is provided by nature. The tourism industry offers a wide range of sports and fun activities, from sailing and surfing courses to visits to the Garda region, with the best infrastructure and regionally reliable bus, train and boat transport
"Amusement parks and everything around the water": The villages around Lake Garda can all also be visited by water (boat/ferry). Both in Cisano and in the centre of Bardolino and the neighbouring towns there are boatyards with boat hire, sailing and surfing schools. Sailboats are allowed on the whole Lake Garda, motorboats only in the south. Those who love water can also have fun in the large amusement parks such as Aqua-World, Caneva-World with an infinite number of water games and slides, which with the famous Gardaland belong to a whole range of amusement parks, all located one behind the other directly on the lake between Lazise and Perschiera, the two southern neighboring villages of Bardolino.
Each place on the lake organises street markets once a week on a different day, Monday Peschiera, Wednesday Lazise, Thursday Bardolino, Friday Garda, Saturday Caprino. And of course the village on the lake competes in summer with big summer festivals and gigantic fireworks at midnight.
Verona and the Opera Festival
The Verona Opera Festival is world-famous and can be enjoyed 20 km from Bardolino from mid-June to the end of August. There is no need to make a great reservation in advance, unless you want extra good seats at the bottom of the parquet rows. But to get a seat on the stone steps of the arena, it is often enough to ask for tickets at the box office 1 hour before the opera begins. The higher you sit, the cheaper the tickets are, the better the view and the atmosphere not only of the Roman arena, but also of the surrounding city, the better the acoustics, the more direct the contact to the opera-enthusiastic Italians, who can't help singing along with some arias as quietly and breaking out again and again in enthusiastic applause and cheers to the artists. The small 'Teatro Romano' on the other side of the river is also one of Verona's great attractions with world-class ballets and plays!

The rental price includes all additional costs (electricity, gas, water, waste water, garbage collection) as well as those. The only minor additional costs concern the so-called Kurtatxe. Usually it is 1€ per person/day. As the visitor's tax does not apply to all guests, it cannot be included in the rental price as a lump sum. With the registration of the guests by means of identity card or passport on the day of arrival, the guest simultaneously settles the amount of the visitor's tax with the landlord, who will then transfer the name and visitor's tax fee online to the account of the municipality. The guests receive a receipt for the visitor's tax prepaid to the landlord. The deposit is due with the remaining payment on the day of arrival and will be refunded to the tenant by the landlord no later than 3 days after the end of the holiday/departure, provided the tenant has not caused any damage.

linen and towels can be ordered separately for a fee of 18€ per person
: on the private street along our fence, but please never park opposite the garage entrance of our neighbour of house no. 13!
stove: The Scan Buller stove is only available in the middle of March-May and October-November, works like the devil and is very easy to use. Firewood is stacked opposite the front door.
room: The large drawer cupboard in the living room is private, the contents are the property of the landlord and therefore not accessible to guests.
5. Pets are allowed for a fee of 50€ per week
:is available
house is a non-smoking house 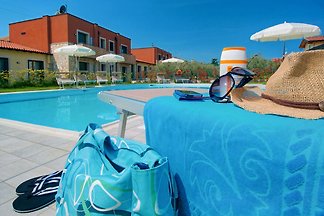 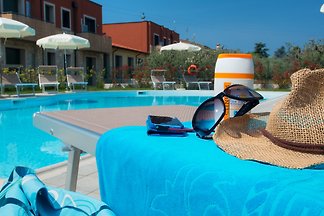 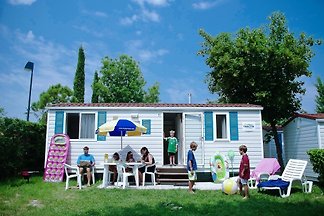 All accommodations in Bardolino