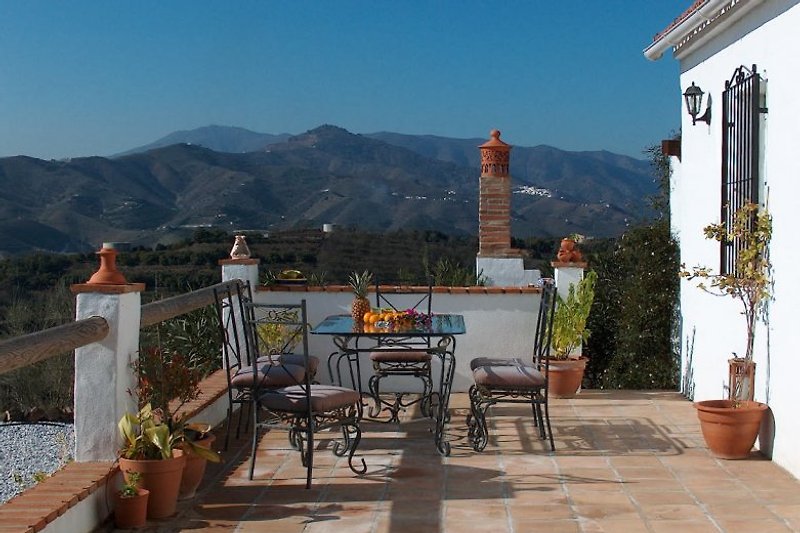 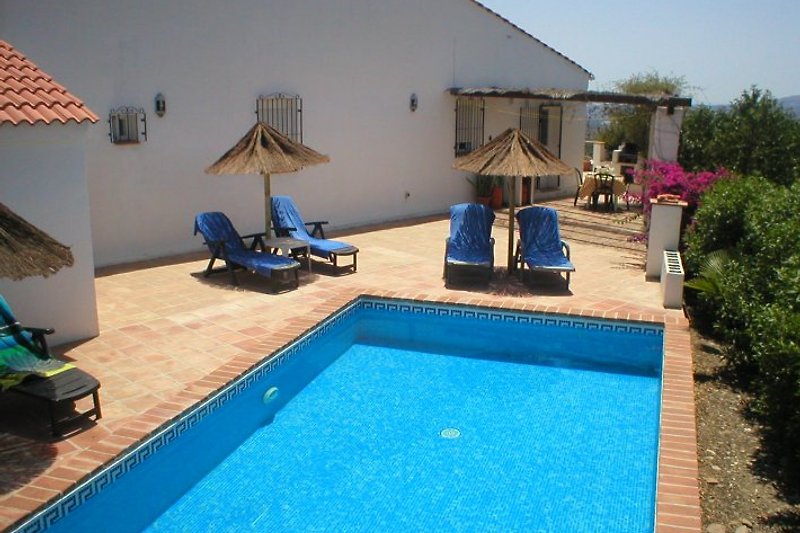 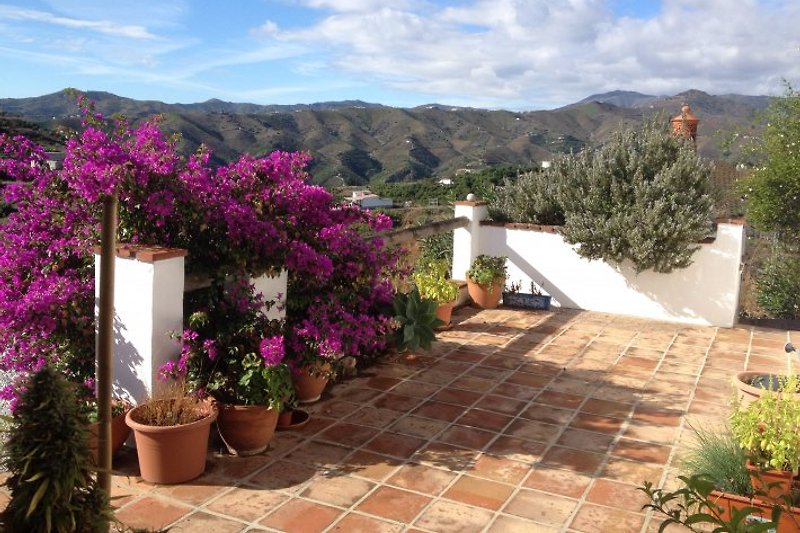 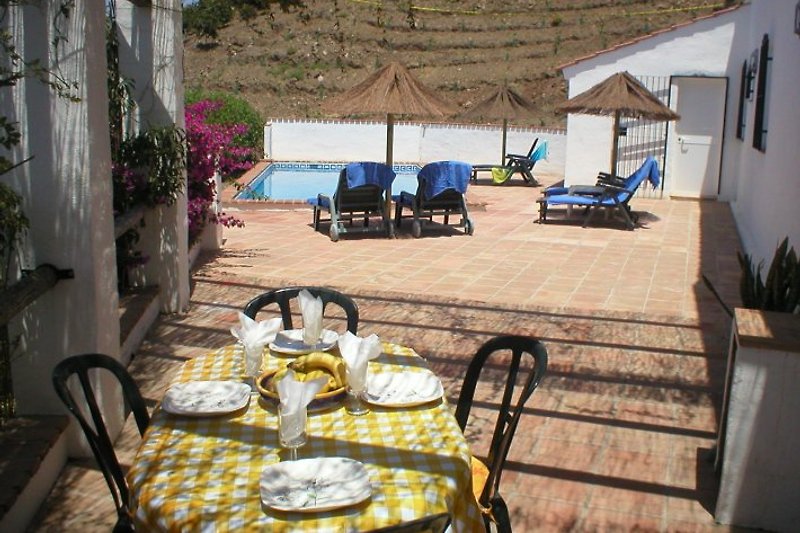 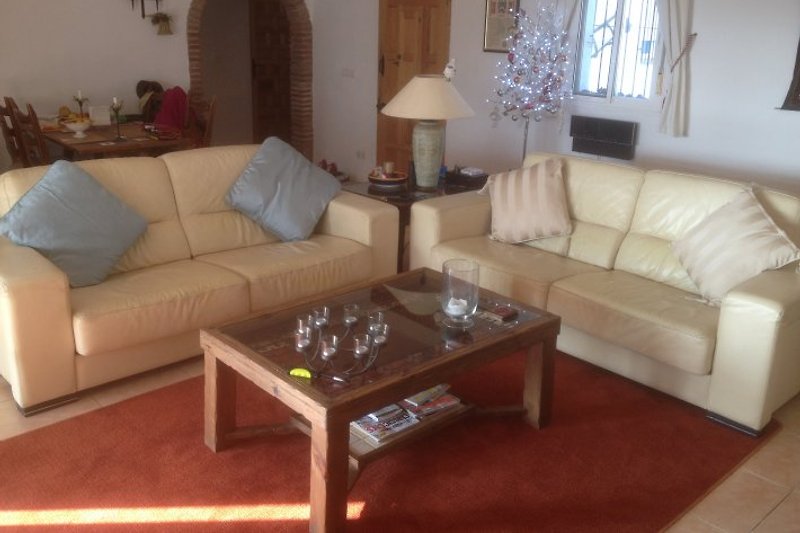 3 separate bedrooms all en-suite the master having walk in shower and bidet, In addition a cloakroom with wc, the large lounge has a woodburner for the winter months and comfortable seating with two sofas, desk with internet access, fully equipped kitchen with dishwasher, fridge freezer separate drinks fridge, microwave oven, washing machine oven and hob and outside a large barbecue. The south terrace has a 6/8 place table also wicker and two easy chairs. From the kitchen the west terrace with another dining table and chairs, 8m x 4 m swimming pool ( m are deep ideal for children) along with sunloungers. There is sufficient place for several vehicles on the private drive, and because the house is located also down a private drive very little in the way of passing vehicles, in fact your more likely to see donkeys and horses than cars.

The house is in a beautiful situation, south facing with three terraces all for the guest’s sole use. They can select between sun-bathed on the large south terrace with view of the sea, or the in the shade of east terrace with a nice glass of Rioja, or west terrace beside the 8m x 4 m the swimming pool. With the long sunny day here and late sunsets in Andalucia eating alfresco is a joy. Even in November through till February the temperature can be 20 degrees or higher. Winter vacationing in Andalucia can also provide for skiing in the Sierra Nevada, which is only hours away, making it still possible to ski in the morning and be on the beach in the afternoon.
Finca Jacaranda is ideal for families with children, with 3 separate bedrooms all en-suite. The house stands on 12,000 sq. mtrs of land, and is very private and not overlooked. Originally a ruin dating back some 400 years the property was mostly demolished, although some of the original ruin still stands at the rear of the new building. With every modern convenience including Sat TV, washing machine, dishwasher, 2 refrigerators, fully equipped kitchen and a large Barbecue. For those with there own laptop Internet access is available. With both a mix of antique and modern in the Andalusian style it blends well with the character of the new house. It is advisable to rent a car to fully enjoy your holiday here from Malaga at the airport, the probably most inexpensive car rental is "1st Rent A car” a Danish company, who depending on the season can rent for 1 week from as little as €94.
The house has everything on one floor a bonus for the not so able, however the entrance to the Swimming pool still has a step up, which will be rectified by summer 08.
Triana is located about 10 km from Velez-Malaga in the Axarquia region of the Costa del Sol about 50 minutes or less on the autovia (motorway) from Malaga and the airport, the finca is then km from Traina.
Benamargosa the next nearest town is at the heart of Avocado, Mango and lemon growing areas because of the microclimate. The village centre is 90m above sea level, the mountains on the right and on the left of the valley rises to a height of 550 m. because of the warm climate it is possible to have more than one harvest per year. The mountain-slopes, which surround the town, have traditionally grown grapes cultivating both for wine and raisins. Lately olive and almond trees have given way to Mango and Avarcardo production. With approx. 1700 inhabitants the village is quite small, with
Agriculture being the main source of income
The History dating back to the 15/16th centuries, the church of the Incarnacion dates from the 16th century. The 19th century saw Benamargosa with its largest population somewhere near 4000 inhabitants, it was short lived however with a blight destroying all the grape stock and the population dropped to 700 or so. During the Spanish civil war (1936-39) Benamargosa was famous for tobacco smuggling, and became known as “Little Gibraltar”. The everyday life in Benamargosa is still typically Andalusian despite the rapid changes of the last years. With people going about there daily work and frequenting the numerous local bars for tapas come siesta time, with two supermarkets, a few small shops and bank, and excellent public swimming pool.

prices are - per object - at an occupancy up to: 6 persons 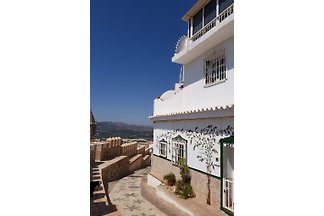 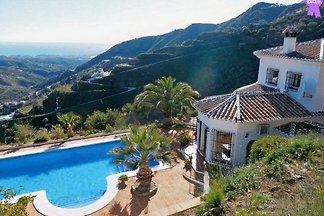 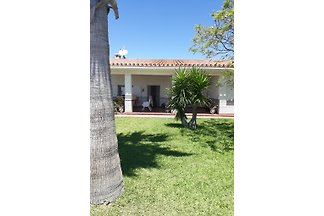 All accommodations in Vélez Málaga