The villa was built in Italian - Spanish Mediterranean style. It complies with all laws of "Feng Shui", the ancient Chinese art of harmonious furnishings and lifestyle.

In the holiday region: Historical Town of Balchik, very close to the Botanical Garden and the Palace of Queen Maria. 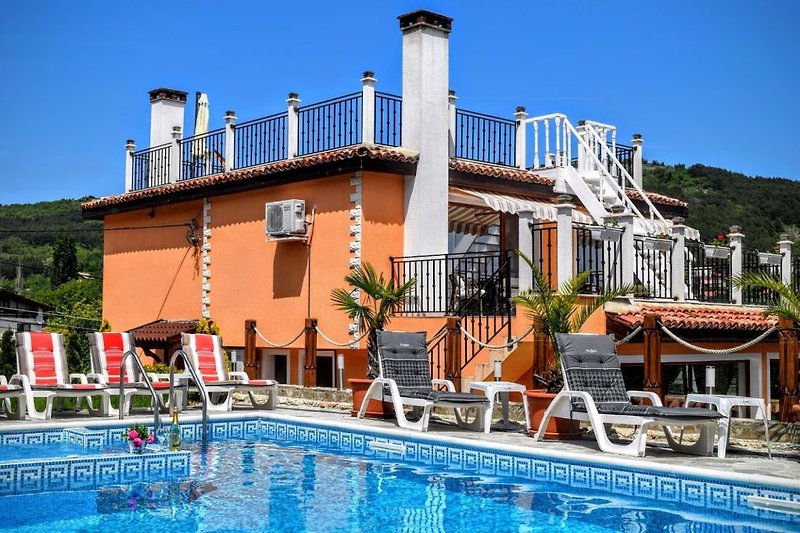 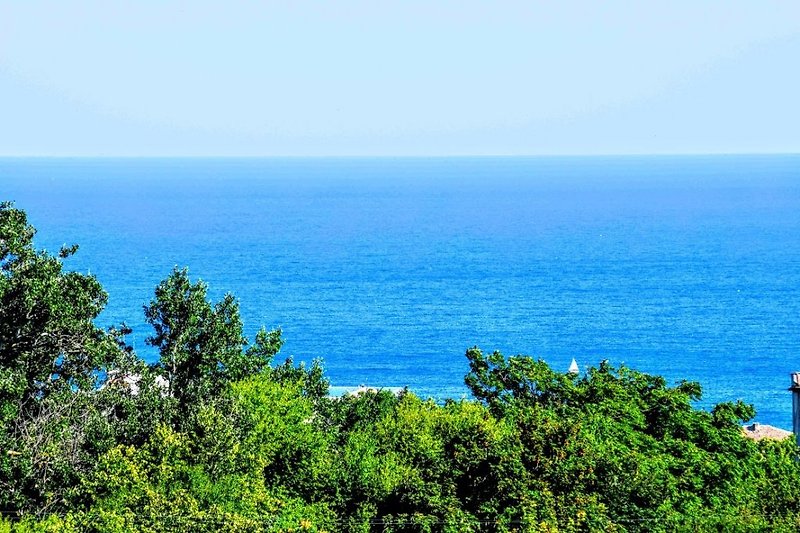 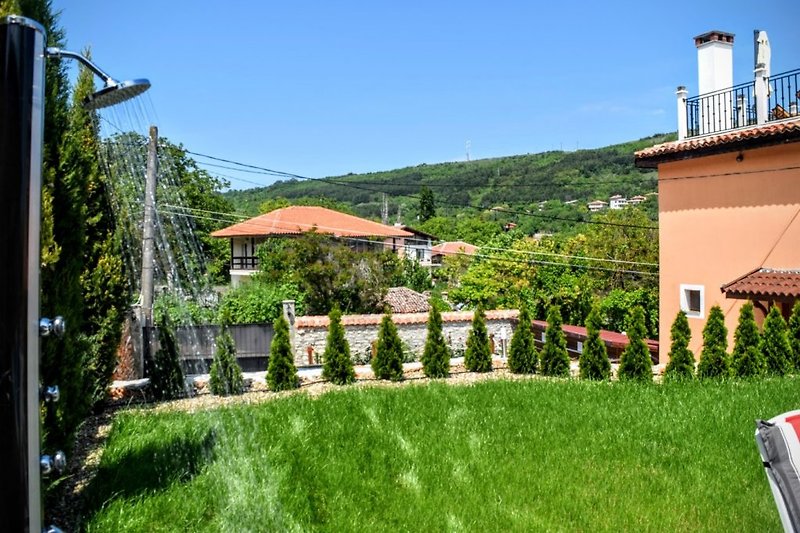 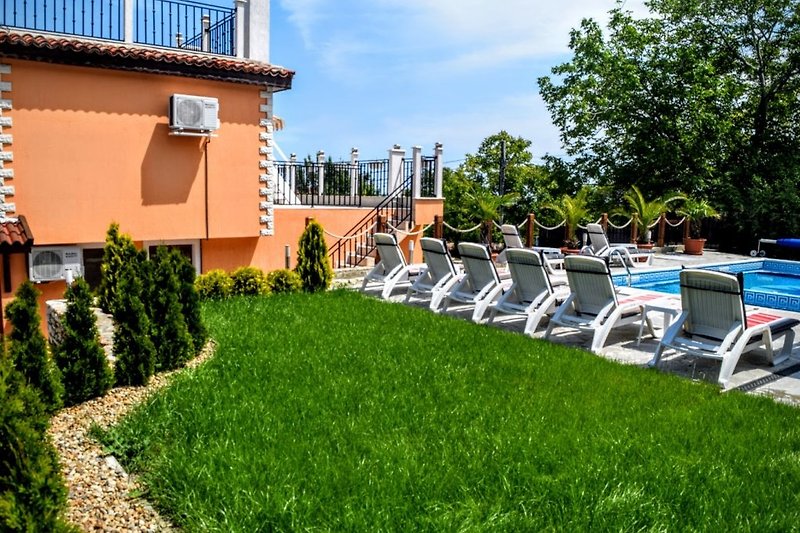 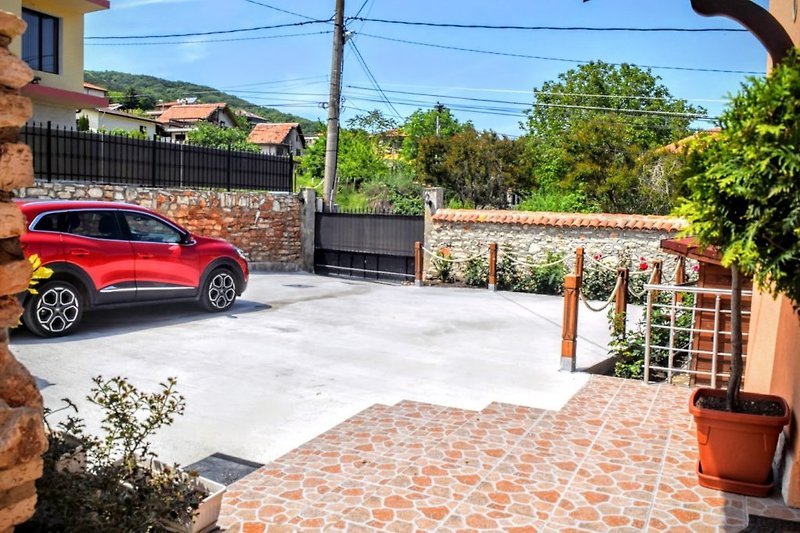 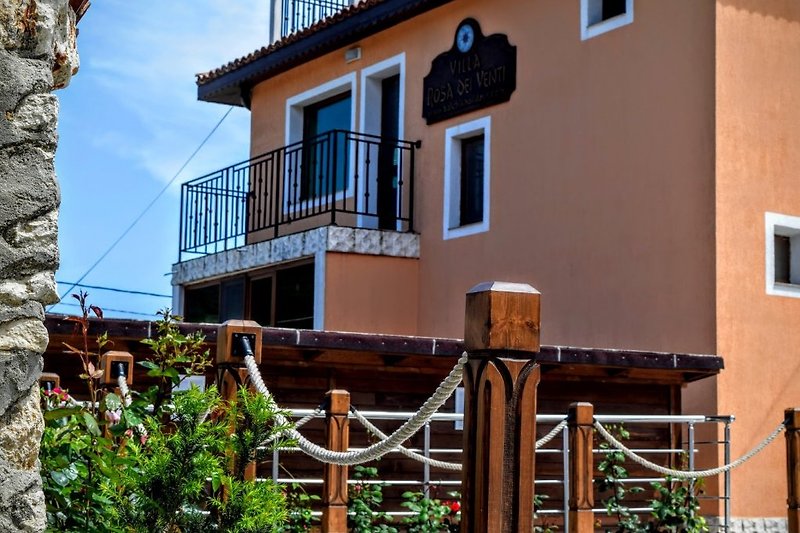 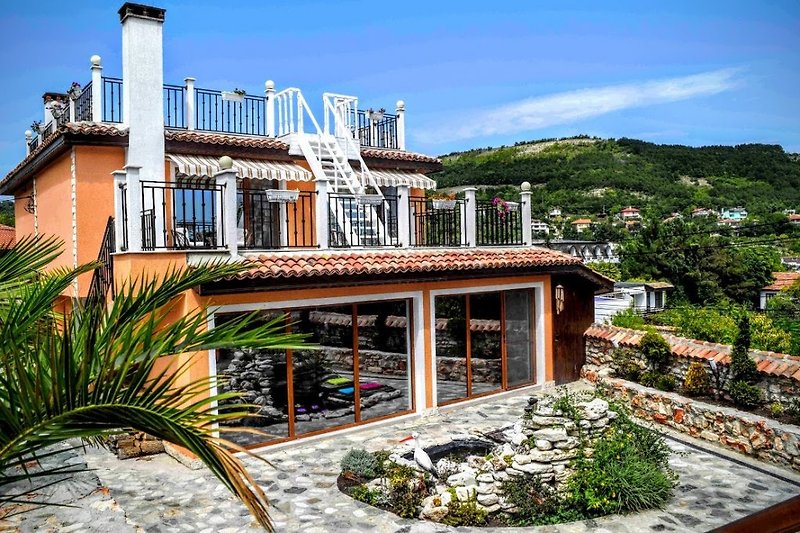 The two panorama terraces at the villa 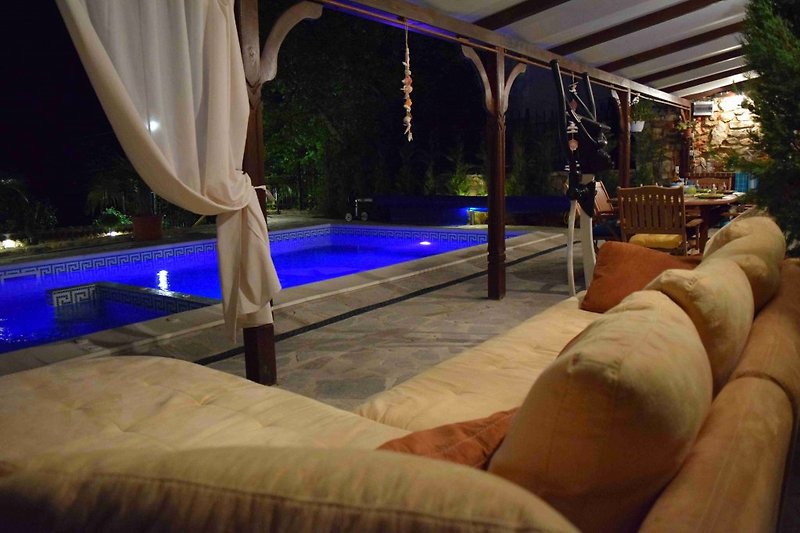 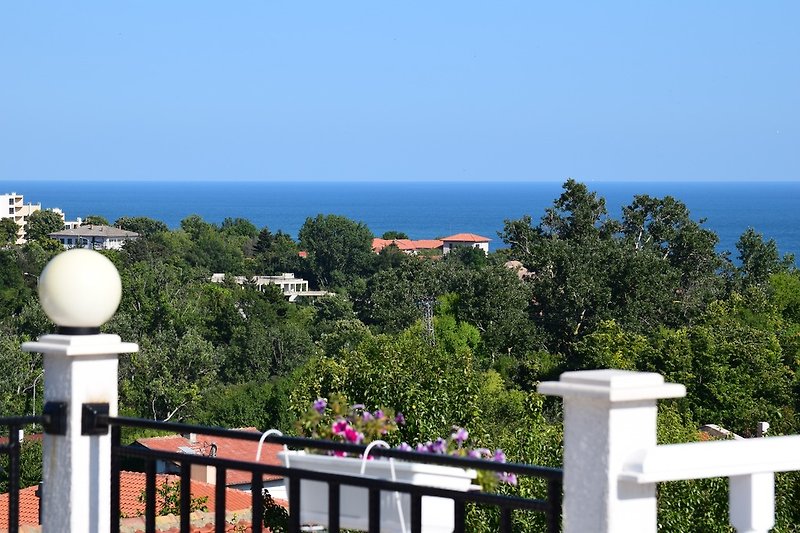 View From the panoramic roof terrace 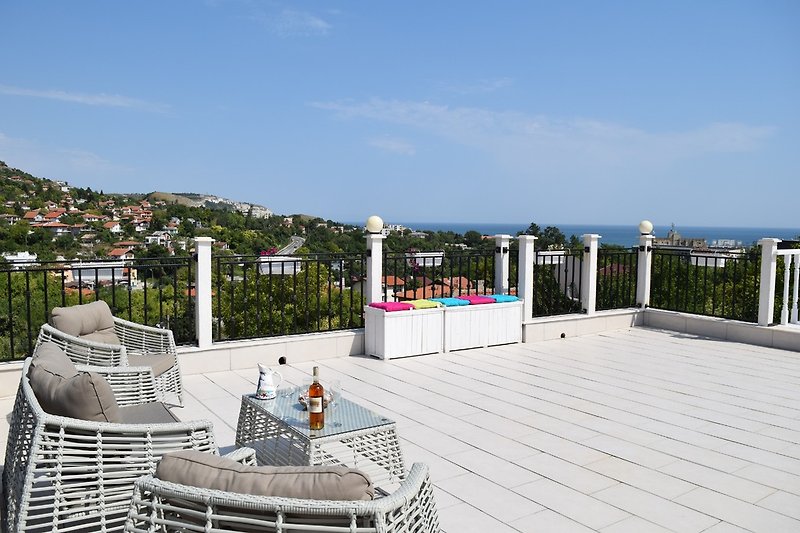 Sea View From the Roof Terrace 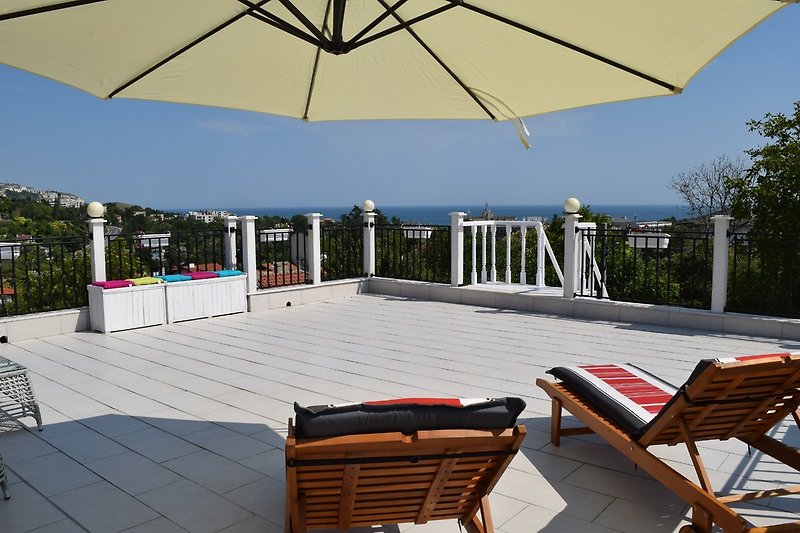 Sea View from the Terrace 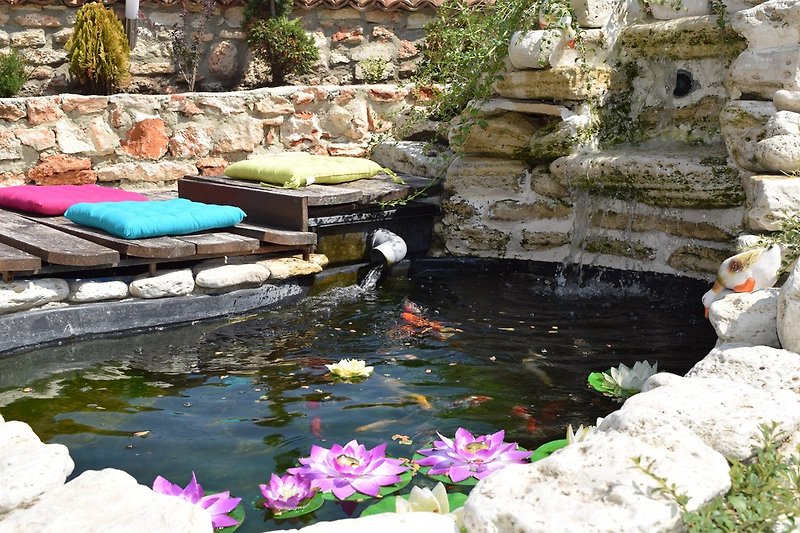 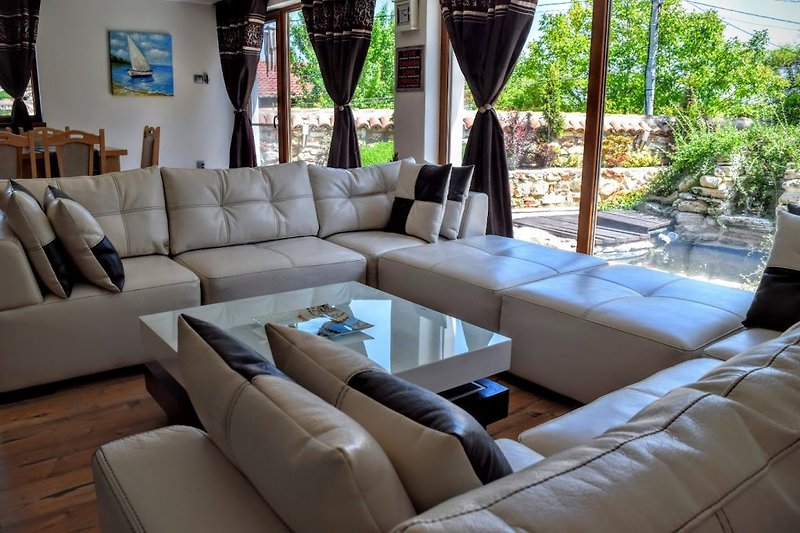 Lounge with view to the Garden and the Fish Pond 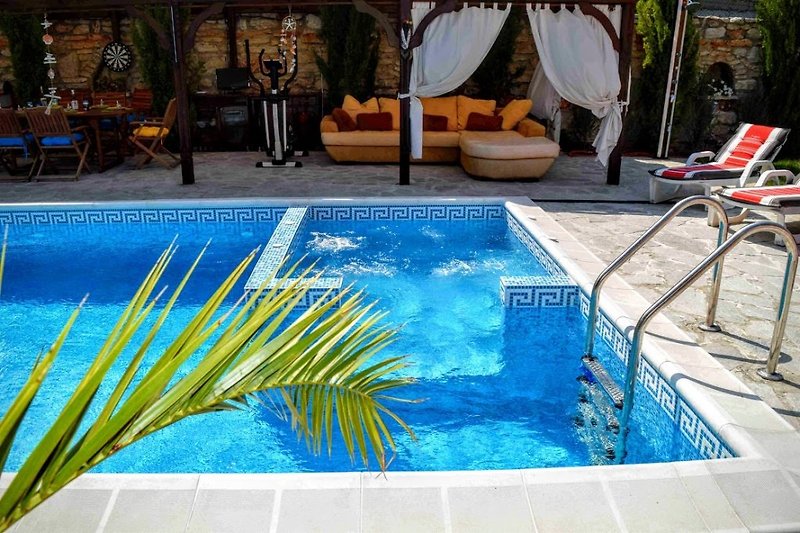 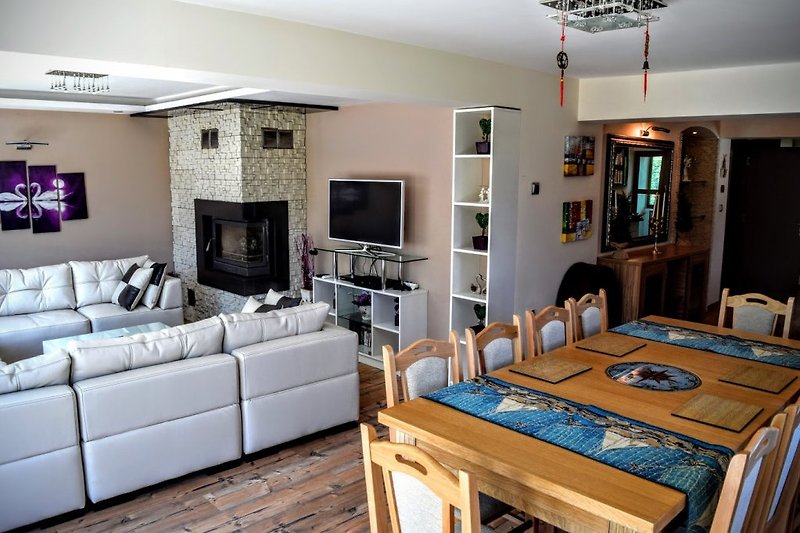 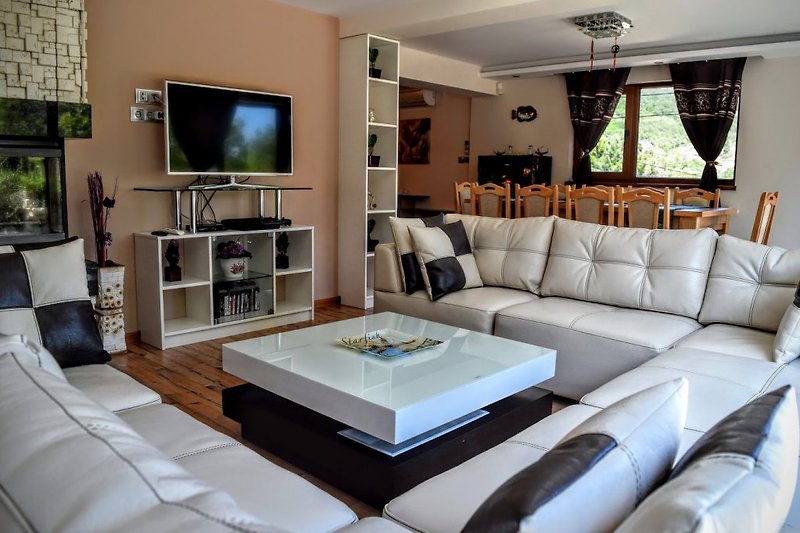 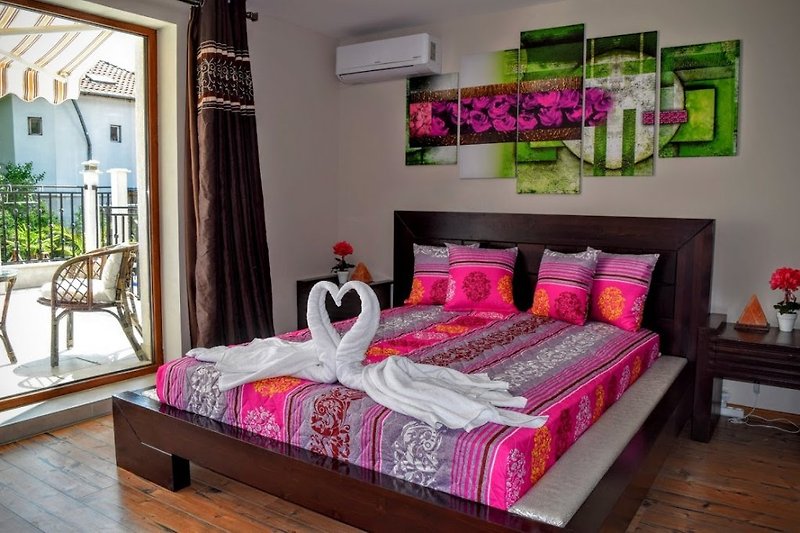 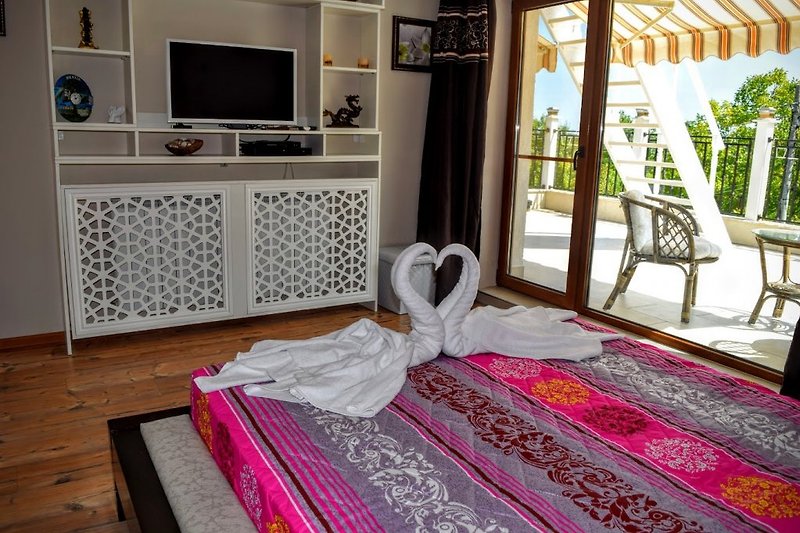 Tv and air cons in all the bedrooms 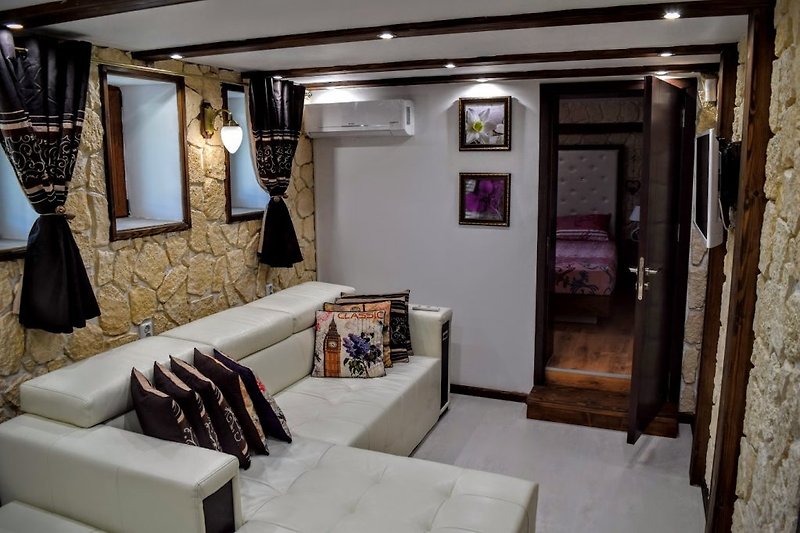 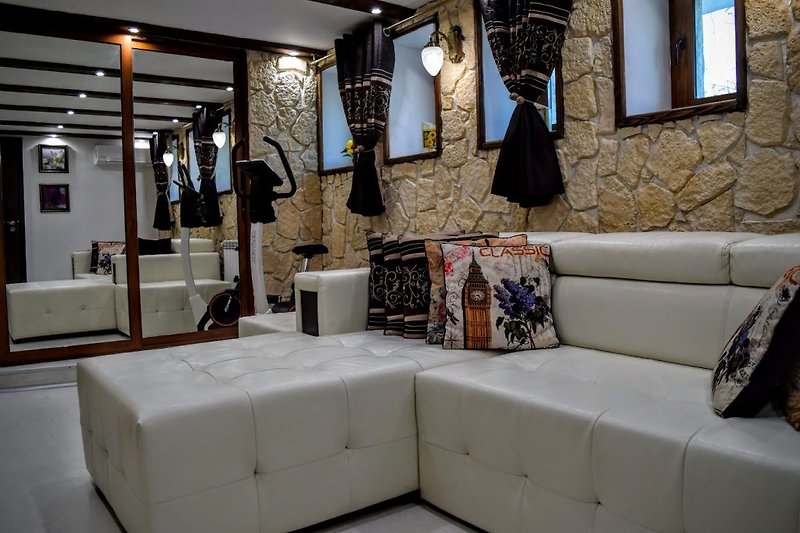 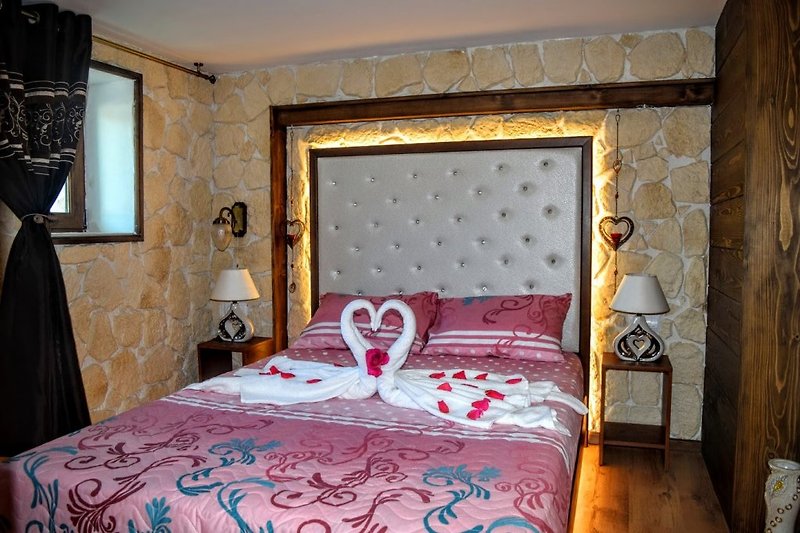 Beautifull Bedroom on the ground floor 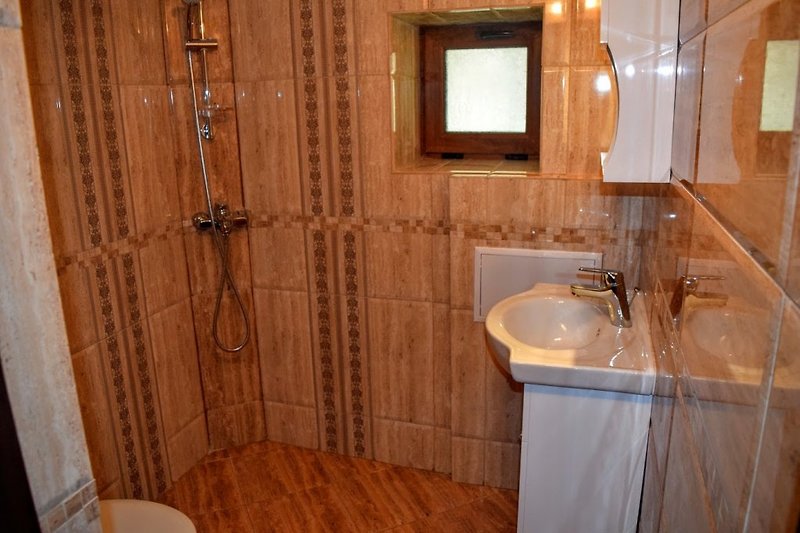 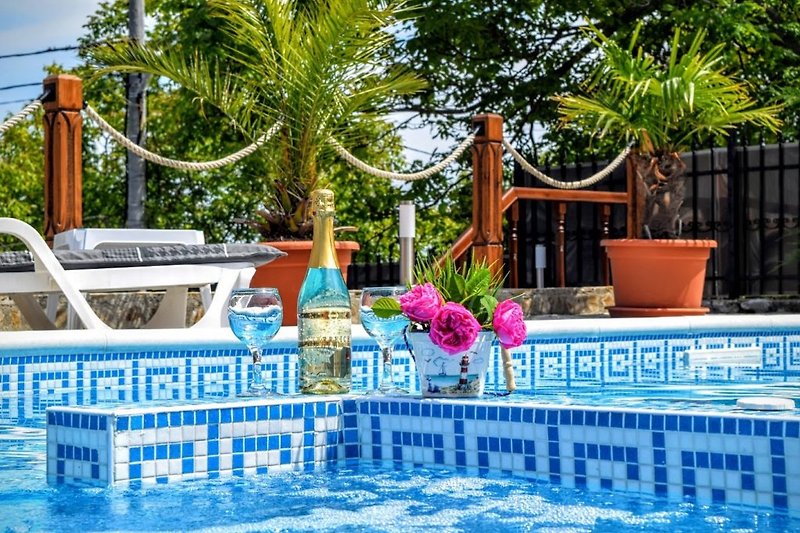 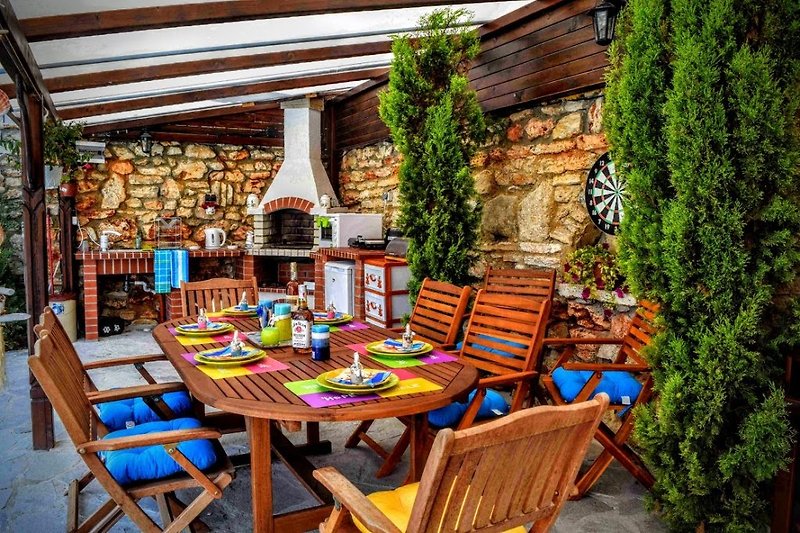 The villa was built in Italian - Spanish Mediterranean style. It complies with all laws of "Feng Shui", the ancient Chinese art of harmonious furnishings and lifestyle.

In the holiday region: Historical Town of Balchik, very close to the Botanical Garden and the Palace of Queen Maria.

"Rosa dei Venti" or literally translated from the English "Rose of the Winds" was the predecessor of today's compass. The symbol of the rose has been used in the Middle Ages as a major landmark on all travelers and sailors. Markings on the cards, it has given the right direction and the winds coming from the eight directions of the world, whose names were: Tramontana, Greco, Levante, Sirocco, Mezzogiorno, Libecho, Mistral and Ponente.

"Rose of the Winds", this powerful and timeless guide to becoming a symbol and name of Villa Rosa Dei Venti. The house is an architectural design and creation of the owners of the villa - a young family who found their way here in one of the most beautiful and picturesque towns in Europe - Balchik. After completing final construction and decoration of the villa comes the Idea - the result of their work can be shared and appreciated by many people who can stay here and enjoy the unique atmosphere of the place.

The villa was built in Italian - Spanish Mediterranean style. It complies with all laws of "Feng Shui", the ancient Chinese art of harmonious furnishings and lifestyle, and the principles of the "five elements" - fire, earth, water, metal and wood symbiotically combined in indoor and outdoor space .

For the convenience of guests in the courtyard there are several different places for recreation, surrounded by numerous flowering and evergreen shrubs and flowers.

Terrace "Ponente" is one of the largest and cheerful places in the house. This is the area with pool, Jacuzzi and Grand Pergola below which is a barbecue area and a comfortable sofa for relaxation and some chat. All this surrounded by beautiful vegetation and lush green meadow.

Zone: "Sirocco" or "Under the shadow of a walnut." Excellent place to relax in the shadow of Big Walnut with cool glass of white wine in hand, and why not for a midday nap outdoors!?

Zone: "Levante" or "the Fish pond and the waterfall." A place for relaxation, meditation or just a place to drink morning coffee, contemplating the greenery of the rock garden, the beauty of the waterfall and gold Japanese fish - Koi.

Terrace "Mistral" or large terrace. It is the highest point on the roof of the villa. It offers an incredibly beautiful view of the sea, city and mountain slopes. Lot of chairs for relaxation, sun beds and umbrellas, the terrace can be occupied at any time of day, but especially scenic and unforgettable are the moments at sunset and late evening when lying can enjoy the starry sky, the sea breeze, the scent of flowers and green forest coming from the nearby hills and the yard.

The villa has a large parking space for 4 cars with automatic gate with remote control.

As mentioned above, the design of the villa is fully consistent with the ancient Eastern art "Feng Shui" and the principles of the five elements and directions. But it is not confined to the eastern style, on the contrary, each space has its own genuine style and original look, as are imported and notes of global trends in interior design.

The villa has a total of 5 bedrooms:
The Gorund floor or apartment "Atica" of the villa is a separate one bedroom apartment with own entrance designed in art ancient style . A stylish cosy bedroom and a longе with sofa bed and tv. On the floor are the washing machine and the dryer, a bathroom and a toilet.

On the first floor is situated the bedroom " Paris chic Library " .This room is decorated in the style Vintage - Shabby Chic, cosy, neat with beautiful and exquisite accessories in style with Parisian elegance and generous library with selected books in three different styles of language contributes to the comfort and style white stone fireplace. The room has a comfortable bedroom, which can be transformed into two single beds with lifting mechanism. Above the fireplace is big LSD TV with digital TV.

The second floor has 3 themed bedrooms with genuine style.

"Aqua Blue Zen" is the bedroom, which takes you to the tranquility of the sea and the symbols of Zen philosophy and the East. The room has a comfortable bedroom that can be divided into two single beds with lifting mechanism, LSD TV and a very nice themed decor. The bedroom has its own balcony overlooking the secluded mountain town.

Bedroom "On the Beach", thanks to its 3D decor and beach themed elements, creates the feeling that you are in a secluded beach far from routine and everyday life. The bedroom has a large and comfortable bed and a large smart TV hard drive, a hit movie titles. The bedroom has a large terrace with wonderful views, with direct access to the courtyard and pool. We have set a convenient coffee set for debugging code relaxation and privacy of guests.

"Romantic Asia" is the main bedroom with a very romantic atmosphere in the Asian style. The room has own designed bed, a beautiful original decoration and Smart TV with large hard drive with plenty of recorded movies.

The house has three bathrooms and three toilets, one on each floor with modern showers and toilets with built-in bidets.

The villa has two kitchens, one in the house, the other is out to the pool and threelonges.

The dining room is a cosy place decorated in the style of Vintage Urban Shabby Chic separating the living room from the kitchen. The beautiful aquarium with goldfish brings extra touches of comfort and relaxation.

prices are - per object - at an occupancy up to: 12 persons

Places of interest:
- Balchik (about 12 000 population) is a charming town, located 47 km north of Varna city. It is like an amphitheatre on the very seashore. The Royal Palace, the Botanical garden, the churches, the Museum of History together with many other attractions make Balchik one of the most visited resorts on the Black sea coast. The Balchik port played an important role in the town's development, being the third sea-side port in terms of significance after the ones in Varna and Burgas. The unique nature and the ancient history make the today's romantic charm of Balchik - a constant source of inspiration for artists, poets and artists.
- The Royal Palace and the Botanical garden in Balchik. The official name of the palace was the Quiet Nest Palace. It was constructed between 1926 and 1937, during the Romanian rule of the region, for the needs of Queen Maria of Romania. Attracted by the beauty and the romanticism of the seaside town, inspired by the centuries-old trees, the wild flowers and the bird species in the region, Queen Maria of Romania selected Balchik to build her summer palace complex consists of a number of residential villas, a smoking hall, a wine cellar, a power station, a monastery, a holy spring, a chapel and many other buildings, as well as most notably a park that is today a state-run botanical garden. In 1955 the Balchik Botanical Garden was established at the place of the palace's park. It has an area of 65,000 m² and accommodates 2000 plant species. One of the garden's main attractions is the collection of large-sized cactus species arranged outdoors on 1000 m².
- Kaliakra cape is the longest cape on the Bulgarian coast. The picturesque cape is located about 30 km north from Balchik. Kaliakra cape stretches 2 km deep into the sea and consists of 60-70 m high limestone rocks, the inaccessibility of which has been the main reason for the construction of an ancient fortress named Tirisis there. According to local tradition forty girls, the sole survivors of a Turkish attack, tied their long plaits of hair together and jumped to their deaths, rather than be raped by the victors. Nowadays Kaliakra is a nature reserve, where dolphins, shags and a numbers of typical steppe birds can be observed, it is one of the very good birdwatching sites in Bulgaria.
- Kavarna town is one of the relatively bigger towns along the Black Sea coast with its population of a bit over 12 200. On the high hill of Chirakman, which is 3 km away from Kavarna, still can be seen remains of Roman fortresses and medieval town. Kavarna, recognised today as the Rock capital of Bulgaria with so many concerts of world famous bands and artists like Apocalyptica, Deep Purple, Saxxon, Ronnie James Dio, Scorpions, Accept, Destruction, Gamma Rey and Victory, turns into an attractive place for a holiday, combining the modern comfort with a unique atmosphere, at the same time preserving its tranquility and charm.
- Durankulak and Shabla lakes - The Durankulak lake was declared a protected area in 1983 as part of the measures for the preservation of endangered species. It is also where one of the two major birth migration routes passes - the so-called “Via Pontika”. Near the lakes of Shabla and Durankulak there are law-protected damp areas of international importance. These territories are the most significant winter quarters in Europe for many water birds. The Shabla Lake is one of the biggest habitats of the White Water Lily and Yellow Water Lily in Bulgaria. The lakes give shelter also to the Otter, which is a rare animal species in Europe.

With us you can find a unique vacation place in Balchik and the Northern Black Sea Coast of Bulgaria!

All that you can discover with us.

The team of experts from the management company "Best Bulgaria Home Care", takes care of the cleanliness of the villas, gardens and swimming pools. We offer to our guests 24 hour support for any questions throughout their stay. 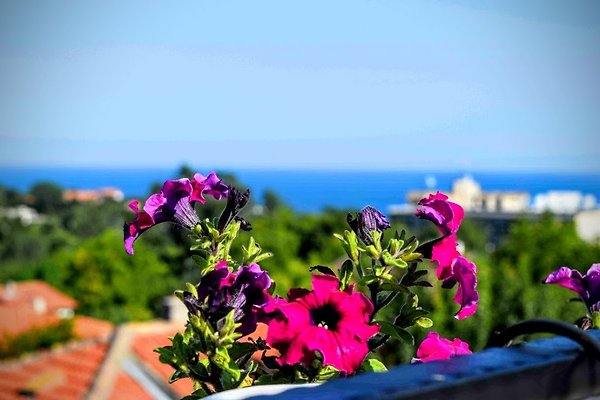 
Provider identification for this advertisement no. 90350 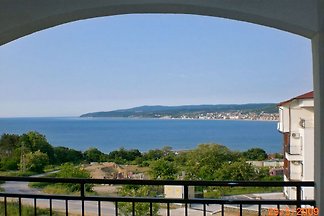 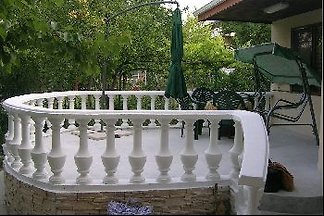 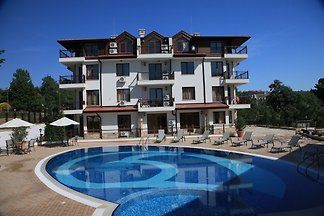 All accommodations in Varna & vicinity