TERRACE ON THE SEA

New apartment,with terrace overlooking the sea, directly on the sea (just go down the stairs and find yourself on the sandy beach with private access), parking and Wifi (free).

Online for over 5 years

centre of the village 1 km

distance to next airport 140 km CATANIA

The apartments are located directly on the beautiful seaside in Marchesana, in the immediate vicinity (200 m) there is: bar, restaurant, pizzeria, sandwich bar, tobacco shop, hairdresser ........
It is approximately 800m. from the village center where all offices, banks and supermarkets.
For those who want to major shopping centers just walk along the sea and about 3km there is the Famila Shopping Mall and Lidl.

It is 35 km from Messina, 70 km from Taormina, 140 km from Catania airport and 70 km from the airport of Reggio Calabria.

surcharge per additional person 5,00 € night
prices are - per object - at an occupancy up to: 2 persons

The apartment is ideal for a beach holiday, but also to discover the ancient beauty of our Sicily.
• "Villa Romana" (800m) archaeological site, dating from the first century BC, characterized by a system of canals that allowed the aristocrats of the time to take advantage of the thermal waters, which preserves inside a beautiful mosaic floor. (1km)
• The "church of Madonna delle Grazie", built on the ruins of a monastery of the Benedictine fathers. (800m)
• The vaunted town of Tindari (10 Km) with the Shrine of the Black Madonna of Tindari and the Greek - Roman Theatre.
• Portorosa (3km) is the largest marina in Sicily, and among the most exclusive in the Mediterranean. Place for departures for excursions to the Aeolian Islands.
• The beautiful Marinello Nature Reserve with its famous lakes.
• Jalari Park (8km) 15:00 museum with exhibits placed in 42 workshops. The places, the avenues, the hundreds of sculptures and stone fountains accompany visitors along a path that leads them to the discovery of their identia, the Avenue Confusion to the path Dreams, passing through other avenues, between the various stages of human mind: the reflection, the pain and ..........
• Castroreale (8km) in the ways it seems that time has stood still retaining the passage of medieval culture, baroque and ..... his hostel and its ancient churches are evidence.
• Elicona Montalbano (15 km) is part of the Borghi more bell'Italia, topped by an ancient castle that was the summer residence of Frederick II of Aragon.
• Milazzo (6 Km) Greek cities, from 36 BC recognized as civitas Romana. There are numerous testimonies and symbols of the millennial history of the city. In this regard, the Castle, the fortified city and the old town are among the UNESCO site and to form the Natural Reserve of Capo Milazzo Headlands.
• Novara di Sicilia part of Borghi more bell'Italia.
• Milici (3km) that still retains the passage of the Knights of Malta, the historic Palace today ASSETS OF UNIECO, is proof.
And yet Barcellona Pozzo di Gotto, Saint Lucia del Mela, Cape D, orlando ... .. that retain much history.

First of all the owner family gave us perfect hospitality. You can not top this! The apartment itself was very new and clean, with perfect equipement, spacefull for a family of 4 persons, warm enough in winter time, safe parking next to the flat at private car park, marvellous sea view, quite area. We had a very convienient 14 days stay. Thank you for this. 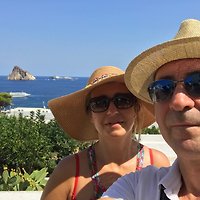 END_OF_DOCUMENT_TOKEN_TO_BE_REPLACED Learn more about the host

Welcome to Sicily !!!!! (The land of sun and sea) Hello, my name is Joseph, with my wife, we are happy to have you as a guest in our holiday home.

https://www.tourist-paradise.com 88750 TERRACE ON THE SEA New apartment,with terrace overlooking the sea, directly on the sea (just go down the stairs and find yourself on the sandy beach with private access), parking and Wifi (free). https://static.ferienhausmiete.de/pictures/133064/bilder_original/133064_1505068906.jpg
57 EUR

Online for over 5 years