It is possible to stay here without having direct contact with the host or other people; contactless payment and key delivery.
5  Gäste
80m² living area
2 bedrooms
1 bathroom
max. 5
80m²
2 BR
1 BA

Online for over 2 years

In our property you can combine relaxation, peace, games, sports and fun for an unforgettable holiday. This applies to families with large and small children (also babies), couples and seniors. Since our country estate used to be a farm, we have a generous amount of space.

Our property offers two completely separate holiday apartments of 80 and 100 m² each, a large courtyard (600 m²), garden (600 m²) and two halls (350 m²). Everything is self-contained. This makes it ideal for families with small children and/or pets - carefree fun is guaranteed!

Holiday apartment 2 is 80 m² and is situated in a quiet courtyard, surrounded by many different flowers.

The living room/kitchen is 25 m² and has a fully equipped (dishes for 12 persons) DAN kitchen in beech. In two further bedrooms, which can be accessed separately, there is a double bed and an additional bed in each and two single beds in the children's room (possibly with an additional pull-out bed). Bathroom with tub and washing machine. The WC is extra.

Directly in front of the house is the spacious inner courtyard. Surrounded by numerous blossoming flowers, there is a cosy oak seating set in front of the apartment. This invites you to have breakfast, eat outside or to spend a cozy summer evening outside with a good glass of wine from the region

The garden with its numerous fruit trees, herbs and vegetables is also ideal for children to play and romp around. Adults will find an oasis of peace and quiet here. Here you can also barbecue as you please. A grill is available

The typical Burgenland Streckhof is decorated with many flowers. There is a huge sandbox with many toys. A small pool serves to cool down quickly. Afterwards you can relax in a deck chair on a small lawn.

For active and sports enthusiasts there is a large sports hall, which is completely covered with laminate. It offers space for 1 badminton court and 2 professional table tennis tables. Rackets and balls are available

In another hall there is table football, can throwing, darts and free bicycles in all sizes for adults and children. For the youngest there are also bicycles with supports and children's tractors. You can also park your own bikes, surfboards, etc. here. In another adjoining room there is a professional table tennis table.

The entire property is self-contained, which is ideal for smaller children and pets.

centre of the village 0.1 km

distance to next airport 65 km Wien/Schwechat

distance to next railway station 1 km St. Andrä am Zicksee

distance to next motorway 9 km Mönchhof

St. Andrä/Zicksee is embedded in the Neusiedlersee/Seewinkel National Park (World Cultural Heritage). It is one of the most important bird sanctuaries in Europe. More than 300 bird species feel at home in the extensive area of reeds, saline lakes and swampy meadows. About 100 km of mostly asphalted cycle and goods paths lead through the whole area. These invite to cycling, hiking, Nordicwaking, as well as inline skating. A paradise for nature lovers, bird watchers and active people.

The vines can store pure sunshine in the extensive vineyards. With 2000 hours of sunshine per year, the Seewinkel is the sunniest region in Austria. The fully effective Pannonian climate with its hot, dry summers and cold winters, together with Lake Neusiedl, ensures that top wines are produced in this region. Some of Austria's top winemakers are based here. The winegrowers gladly invite you to wine tastings

Many bathing lakes, Neusiedler See, Zicksee and open-air pools offer bathing fun for young and old. These are located within a radius of 10 km.

Popular excursion destinations nearby are the steppe animal park in Pamhagen, the village museum in Mönchhof, the basilica in Frauenkirchen, the castle in Halbturn, leisure/fairytale park in St. Margarethen, the lake festival in Mörbisch (operetta) and the opera festival in St. Margarethen. The nearby St. Martins Therme (3 km) offers itself as an alternative program in case of bad weather.

Day trips to Vienna are very popular with guests and are always inspiring. Vienna offers a variety of sights and leisure activities. Especially the inner city with its magnificent buildings and Schönbrunn Palace are worth a visit. There is a train station in St. Andrä, so you can easily get from here to the main train station in Vienna, Bratislava or Budapest

As we are located in the border triangle of Austria, Hungary and Slovakia, we also like to make trips to the cities of Bratislava and Budapest

With the Neusiedler See-Card (all year round) many trips (also by train) and various admissions are reduced or free.

Remarkable are the marshes and the about 40 lakes, which are very salty due to the lack of natural runoff. These lakes have a length of up to 3 km and a width of 1 km and are only about m deep, the largest being the Lange Lacke. Some of them dry out completely in summer. One of the largest is the Zicksee, which is also used for healing purposes with a spa in Sankt Andrä am Zicksee. Many of the other lakes are protected. Accordingly, there is also a very rare salt flora

The area is characterised by a Pannonian climate. It is relatively mild, with little precipitation (less than 600 mm per year) and very windy. With about 2000 hours per year, the Seewinkel is also the sunniest region in Austria. The area is the westernmost salt steppe of Eurasia and lies on average only 117 m above sea level. With these characteristics the Seewinkel is an untypical region for Austria with a flora and fauna that is hardly found elsewhere in Austria

Enjoy the Burgenland hospitality combined with the culinary variety. As the so-called "Vegetable Garden of Austria" is located here, you will find many regional specialities with locally grown fruit and vegetables as well as various meat and fish dishes.

Due to our four children, we have accumulated over the years the complete equipment for babies (crib, changing mat, nappy tub, toilet seat reducer, etc.), play and sports equipment, cuddly toys, wheels in all sizes for children and adults and many various other things that children need. We provide all this to our guests free of charge and therefore do not need to be brought from home.

In the vicinity there is a bakery, bank, grocery store, tobacconist, doctor, inns, church and community sports facilities (football, skateboard pitch, soccer pitch, basketball court. The baker is only 150 m away for the daily fresh pastry for breakfast. Nearby there is an inn, which also offers a breakfast buffet.

Animals are allowed, only on request, provided they are calm, not dangerous and lose too much hair.

Smoking is not allowed in the holiday apartments. Ashtrays are available for smokers in the outdoor area.

Our property is also suitable for group tours on request.

Eugene B. from hoogeveen 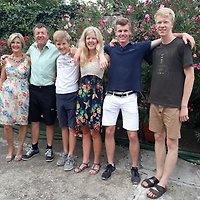 END_OF_DOCUMENT_TOKEN_TO_BE_REPLACED Learn more about the host

We are an extended family with 4 children (Markus 21, Rainer 19, Evelyn 17 and Martin 14 years) and we also live on our property. Therefore we are always on site to make sure that our guests feel comfortable and can spend a pleasant, unforgettable holiday, which they will remember with pleasure later on. The entire property has been in the family for many generations. It used to be a farm, so we have a generous amount of space in the yard (600 m²), garden (600 m²) and in the various halls (350 m²). We are happy to put these places at our guests' disposal The house and the other rooms have been completely renovated over the last 10 years and so the two holiday flats have also been newly built.

https://www.tourist-paradise.com 249993 Ferienwohnungen Sattler In our property you can combine relaxation, peace, games, sports and fun for an unforgettable holiday. This applies to families with large and small children... https://static.ferienhausmiete.de/pictures/159103/bilder_original/159103_44992522571751.jpg
75 EUR

Online for over 2 years