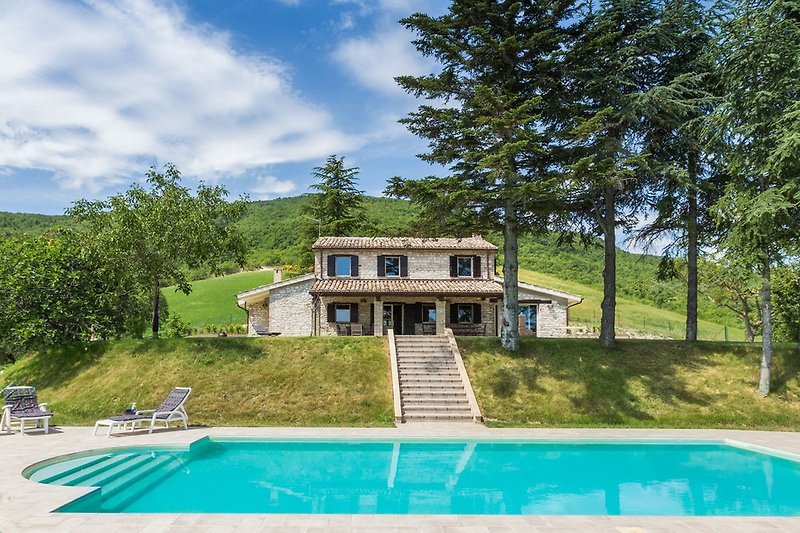 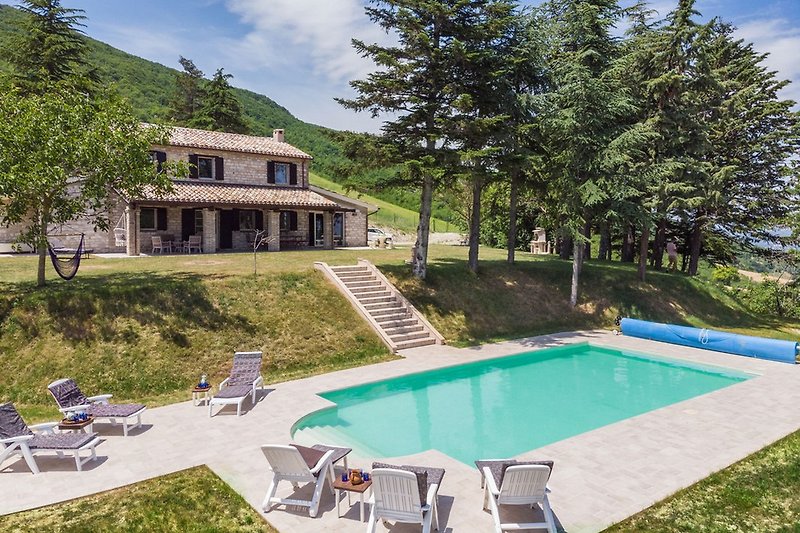 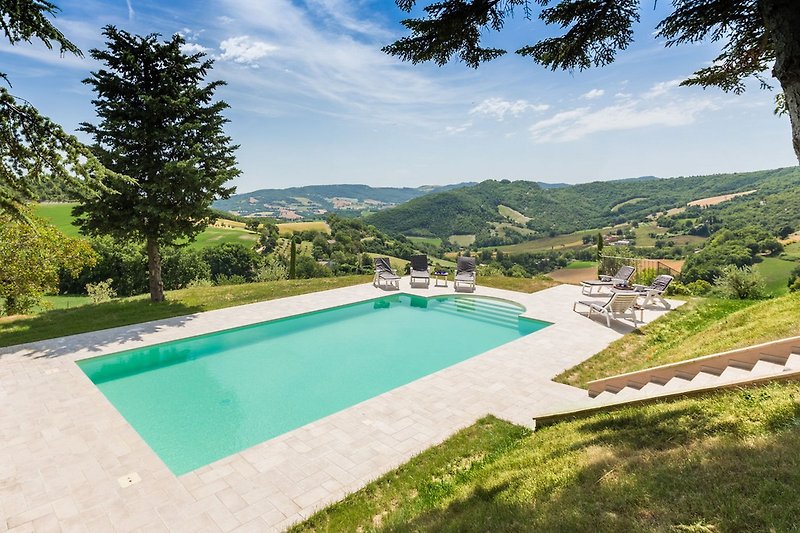 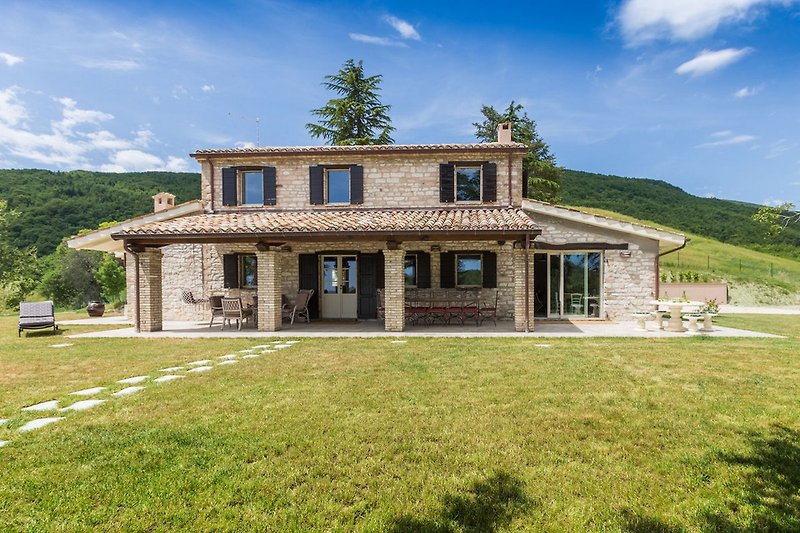 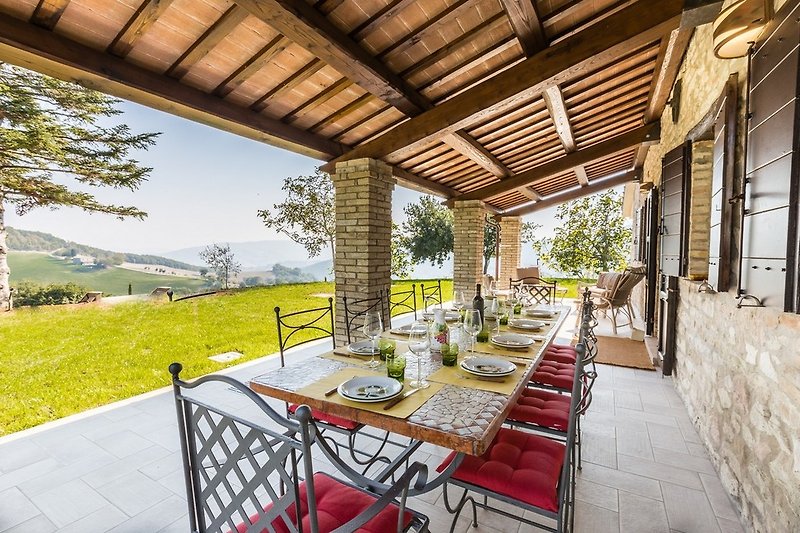 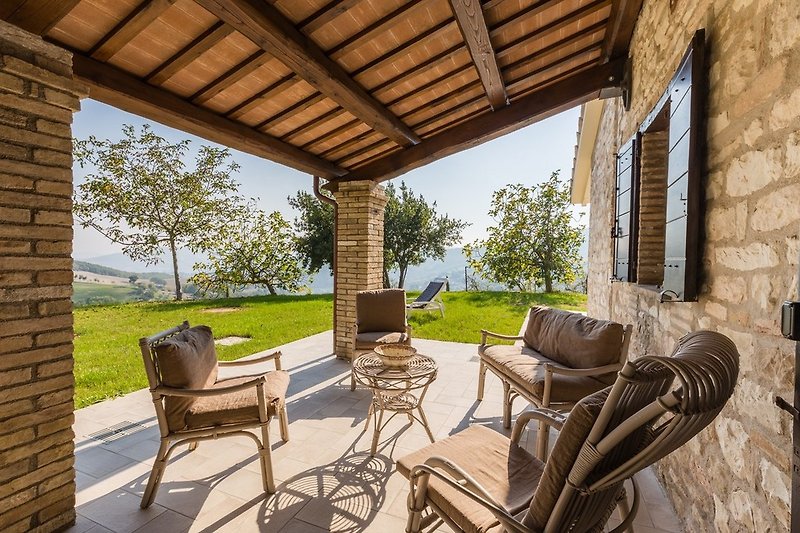 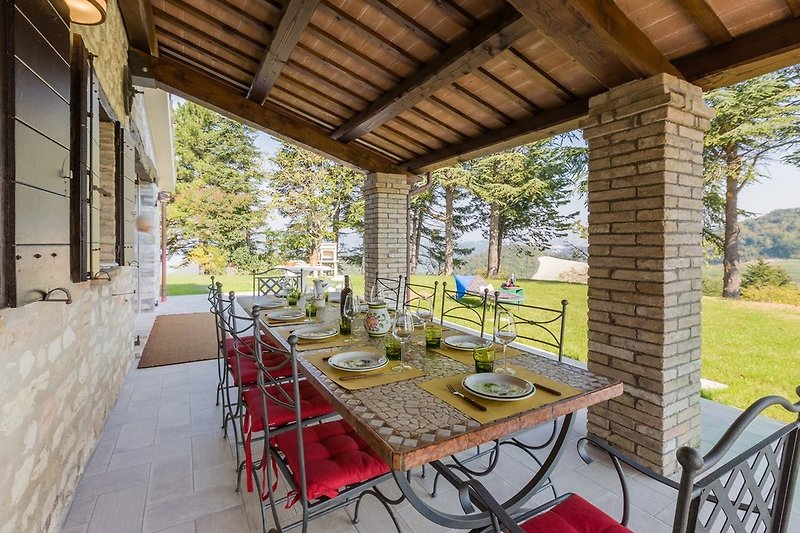 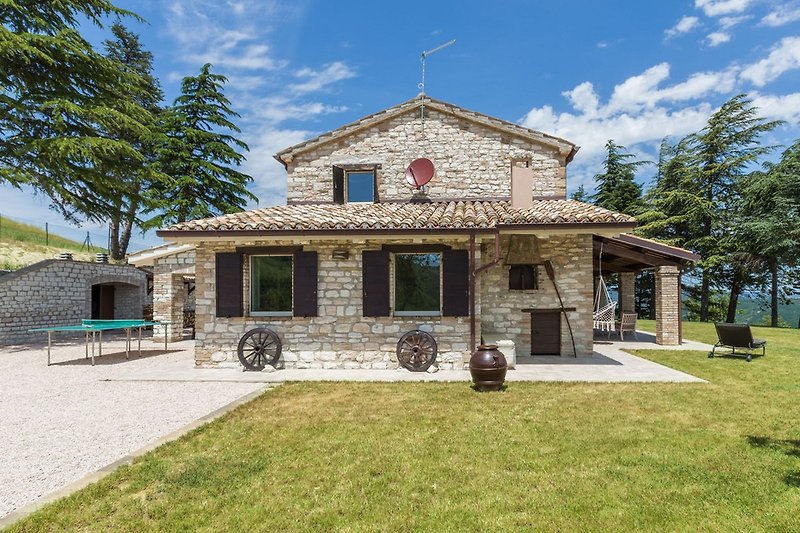 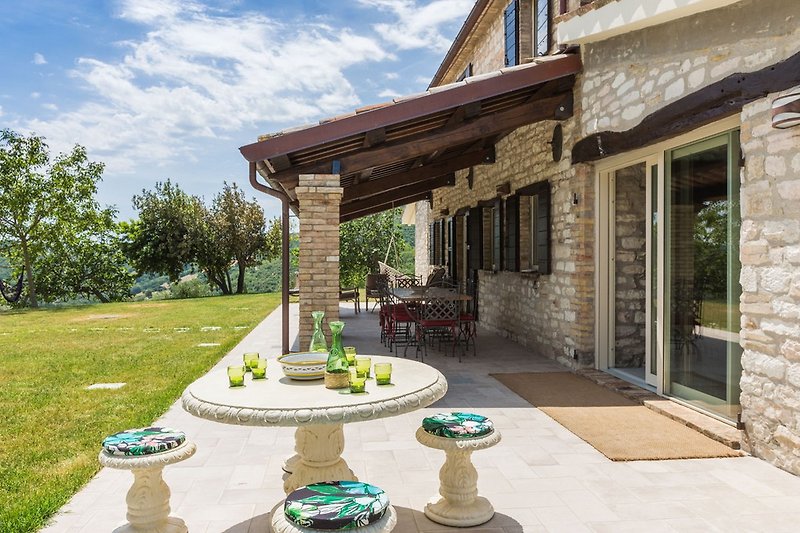 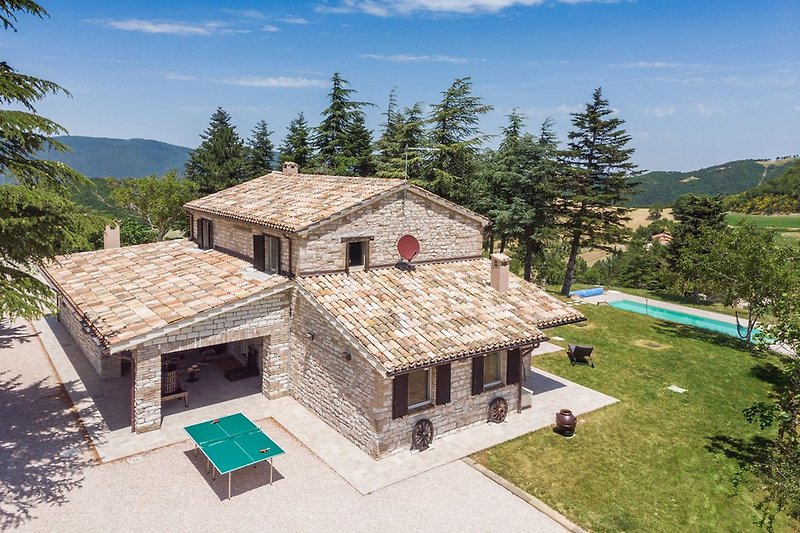 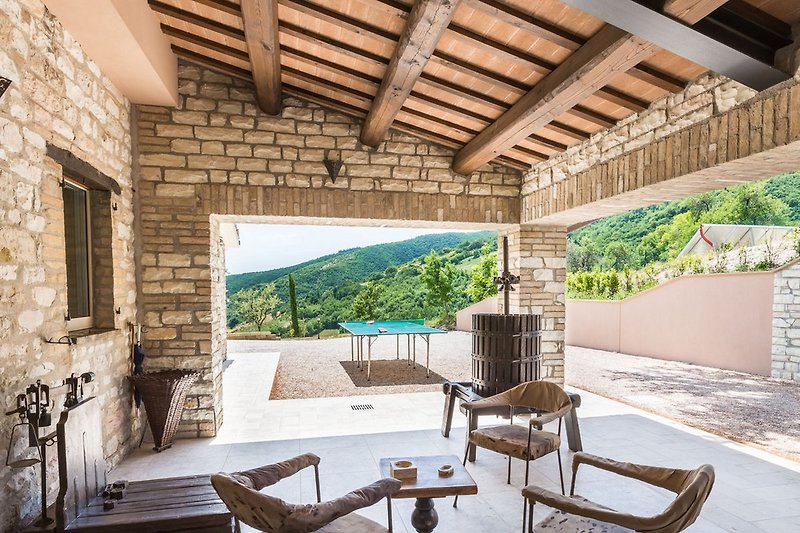 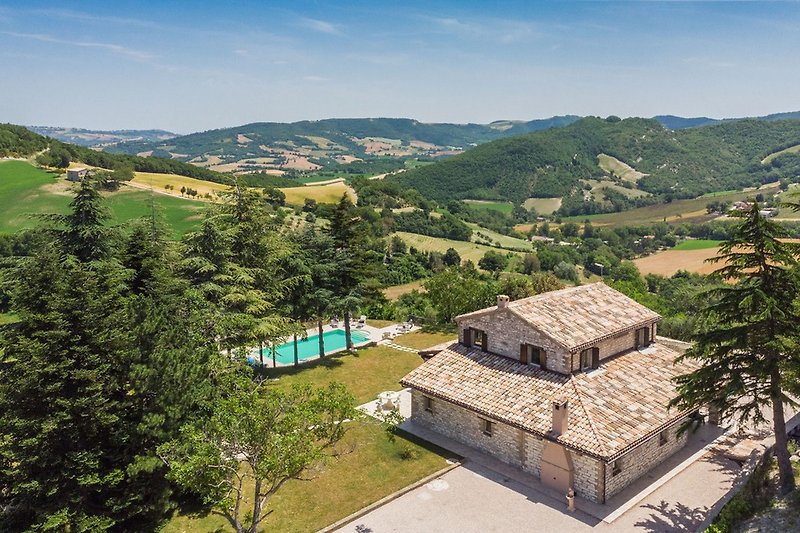 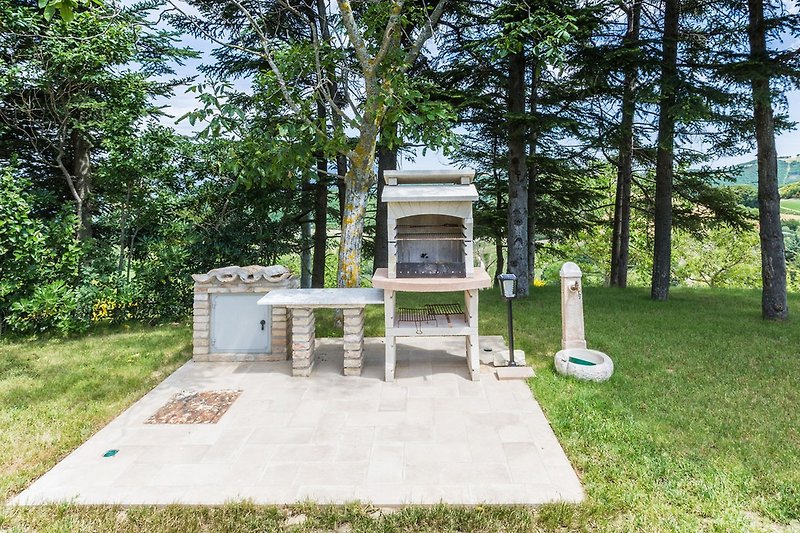 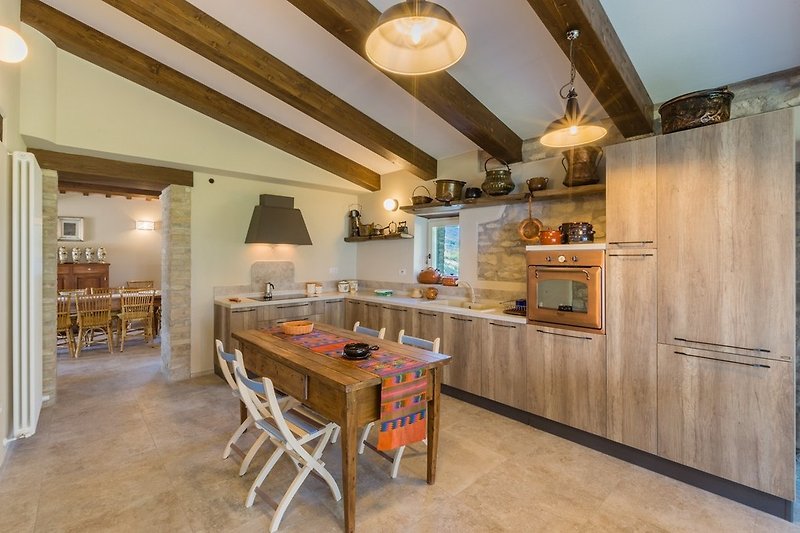 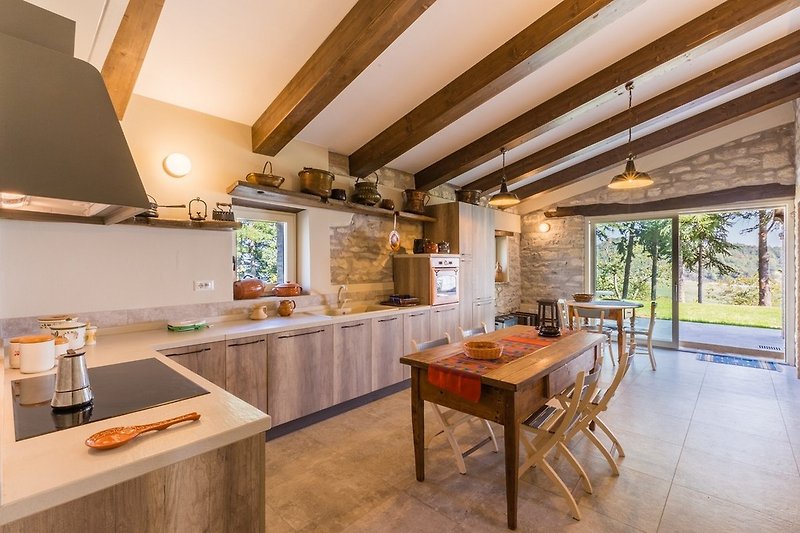 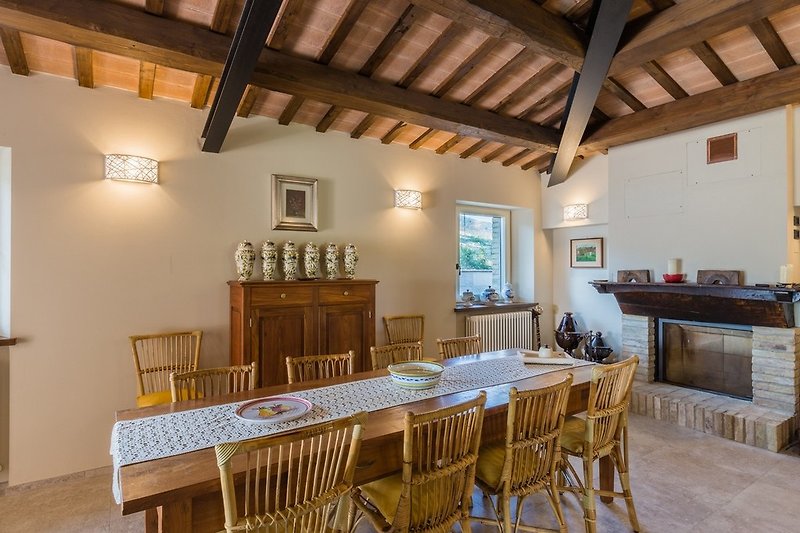 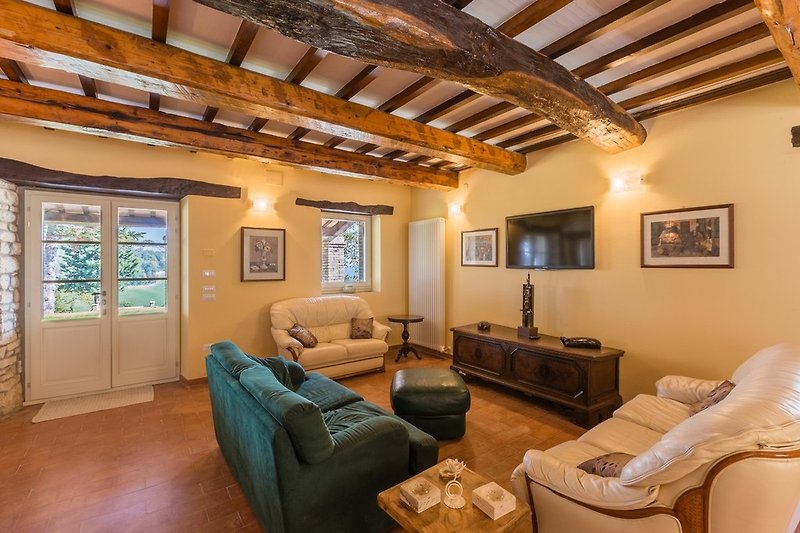 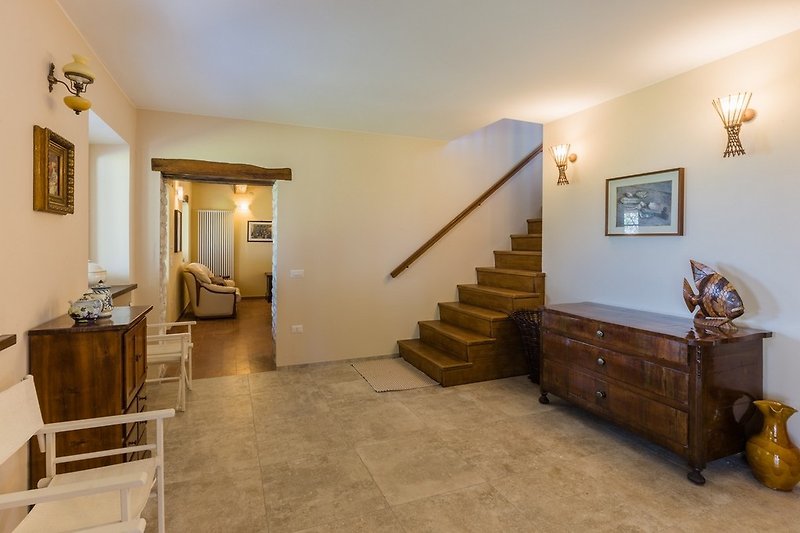 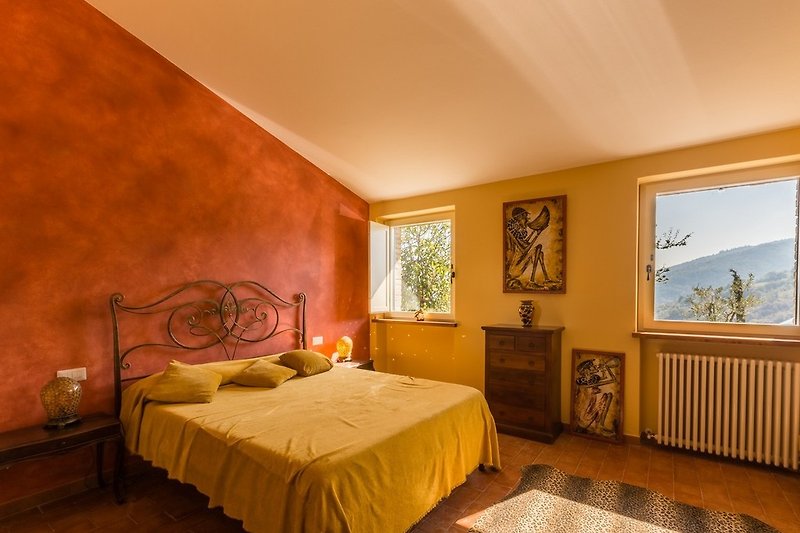 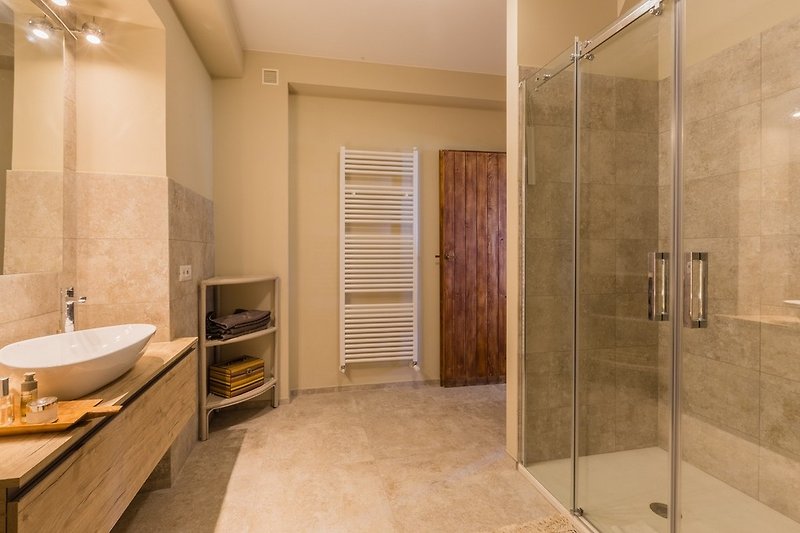 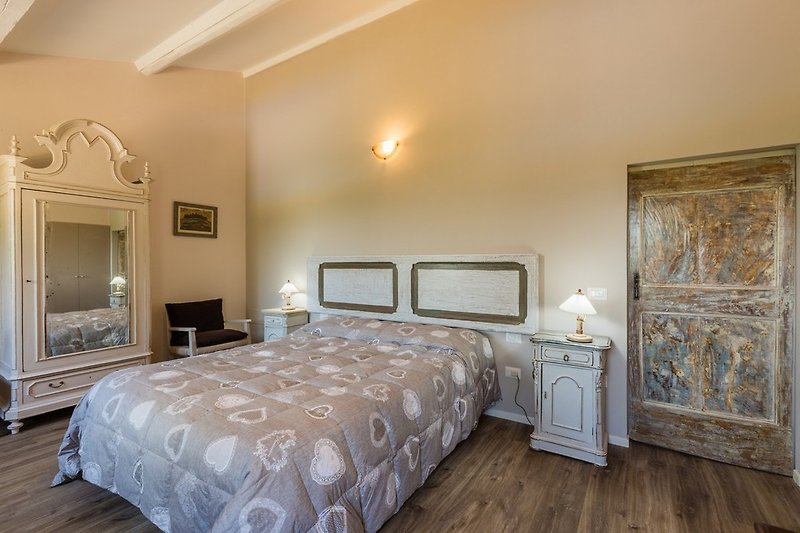 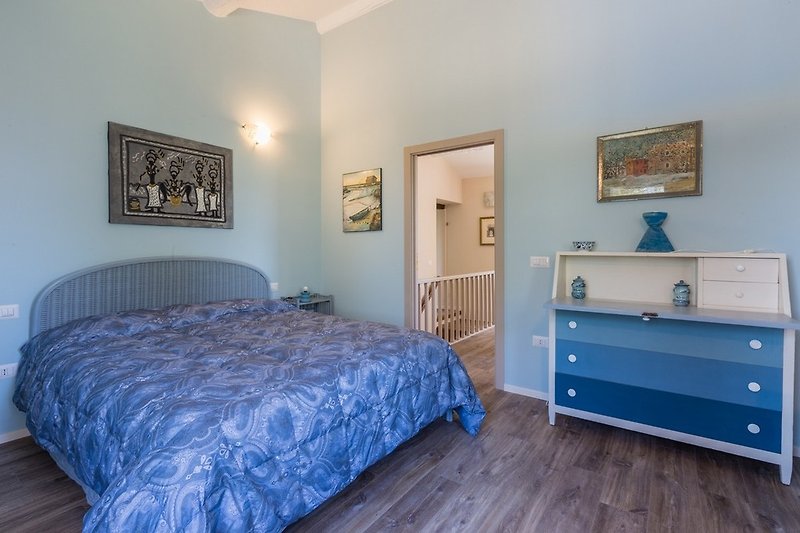 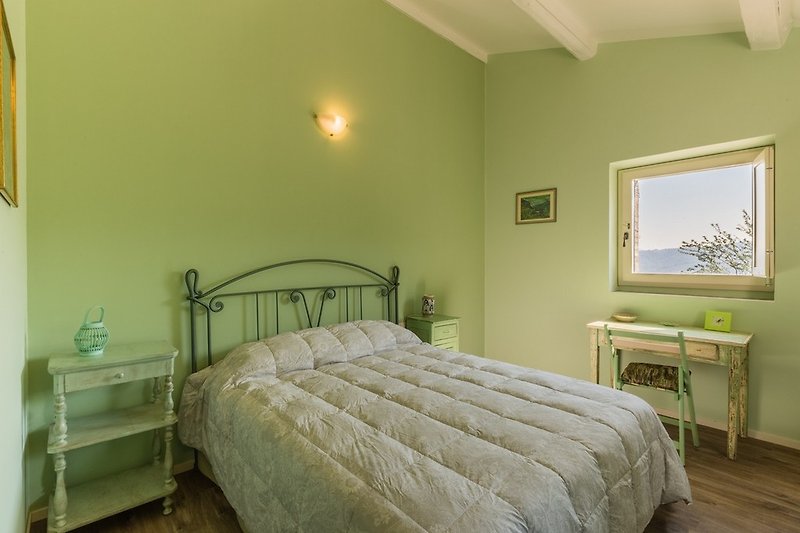 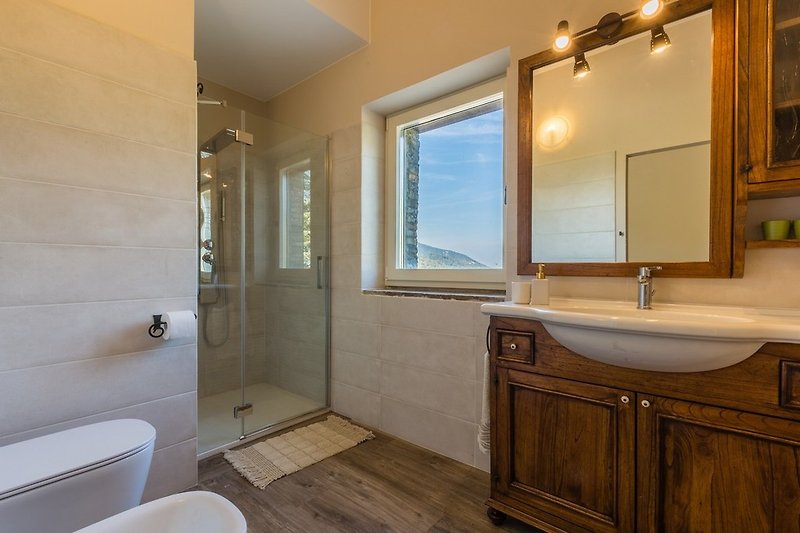 Villa Pally is on two floors, connected by an internal staircase, and can accommodate up to 8 people.
The rooms are spacious and comfortable, with wooden beams and furniture personally restored by the owner.
The ground floor consists of:
- a large living room with sofas and TV, with French windows to easily access the two porches equipped with tables and chairs;
- an entrance porch and a porch overlooking the garden and the pool;
- a fully equipped kitchen with oven, fridge, dishwasher, microwave;
- a dining room with a fireplace connected to the kitchen and to the entrance porch;
- a full bathroom with a large shower;
- a double bedroom;
- a large hall leading to the sleeping area.
The sleeping area is located on the first floor of the villa and consists of:
- 3 double bedrooms;
- a bathroom with shower.
Villa Pally is a property that has been handed down for three generations and over time has gone through renovations and additions that have not however distorted its origin, keeping the materials, mainly the stone, and the typical colors of the territory.
This villa is surrounded by a large and fully fenced garden, composed of lawn, flower beds and trees.
A short staircase, which crosses the garden, leads to the pool, located in a panoramic position with breathtaking views of the Marche hills.
The swimming pool, equipped with sun loungers and deck chairs, has paved areas shaded by sun umbrellas and furnished with sofas, table and chairs, to relax comfortably outdoors.
A large porch, adjoining the house and equipped with tables and chairs, is ideal for outdoor dining. Nearby, in the garden, there is a barbecue area.
The property is accessed via a driveway, closed by an automatic gate. Ample parking available.

Villa Pally is located in a hilly position near the ancient village of San Martino dei Muri, in the municipality of Fossombrone, on the borders of the Natural Reserve of Furlo, in the province of Pesaro, in the northern part of the Marche.
The villa is nestled in nature, situated in a very quiet and private position, surrounded by fields and woods, isolated houses and small villages.
From here you can easily reach Fossombrone, a lovely town, which stands on the ruins of the ancient Roman city of "Forum Sempronii", along the route of the Via Flamina that leads to Rome. In the path that leads from Villa Pally to Fossombrone, crossing the bridge over the river Metauro, a stop is essential to admire the "Marmitte dei Giganti", morphosculptures produced over the centuries by river erosion.
A few kilometers there are also:
- Urbino, known for its Ducal Palace, an absolute masterpiece of Renaissance art and now home to the prestigious Galleria Nazionale delle Marche;
- Pergola, a small city of art characterized by an old town full of medieval and religious architecture;
- the Furlo Gorge, a nature reserve that offers visitors a unique show both for its historical aspect and for its botanical, faunal and geological features. In this protected area there are numerous paths for hiking or mountain biking;
- Acqualagna, known for the truffle trade, which can be tasted in many restaurants.
The Adriatic coast is about 25 km from Fossombrone.
The nearest seaside resort is Fano which has two seashores, a sandy one to the north and a pebbly one to the south. The city of Fano, rich in monuments of the Roman age, such as the Arch of Augustus and the Temple of Fortune, is definitely worth a visit.
Senigallia, a little further south, is rich in many historical evidences: the Rocca Roveresca (the Della Rovere's Castle), the Duke's Palace, the Ercolani Arcades, as weel as being famous for it 14 km long "velvet beach" characterized by the Rotonda a Mare (circular pier). It is full of beach resorts, restaurants and pubs and has a lively nightlife.
Finally this area of the Marche is renowned for its food and wine and typical products including bread bruschetta seasoned with tomatoes and extra virgin olive oil, homemade pasta, such as tagliatelle, passatelli or gnocchi, seasoned with meat sauce or truffle, meat cooked in the oven or grilled (lamb, rabbit, goose or wild game), crescia or piadina with cold cuts, pecorino cheese and chards, honey and served with the dinner wines such as Biancello del Metauro and the Colli Pesaresi Rosso/Rosato Sangiovese, the straw wine and the sour cherry wine.

prices are - per object - at an occupancy up to: 8 persons

The rental price does not include (to be paid upon arrival):
final cleaning € 100,00; pets allowed on request (max. 1 pet a week) € 50,00; heating consumption; extra cleaning; extra linen change.

Italy Holidays Rentals is an Italian agency that deals with renting villas with pool, holiday houses with pool and apartments in farmhouse with pool in the Marche, Umbria, Tuscany and Lazio regions.
Our seat is in Mondavio, in the Marche region, and thanks to the knowledge of our territory, we want to offer our clients the best solutions for an unforgettable holiday in Central Italy. 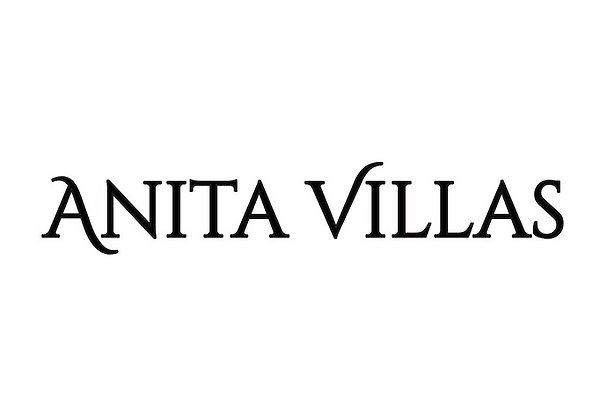 
Provider identification for this advertisement no. 177170 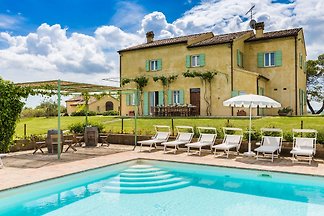 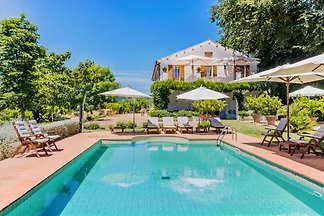 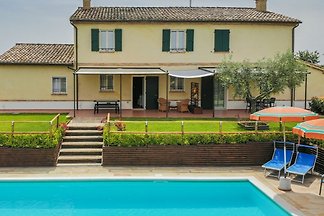