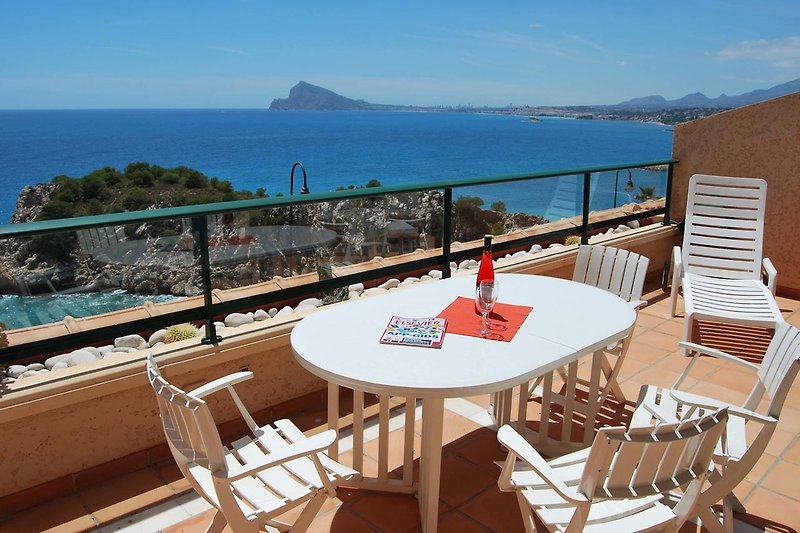 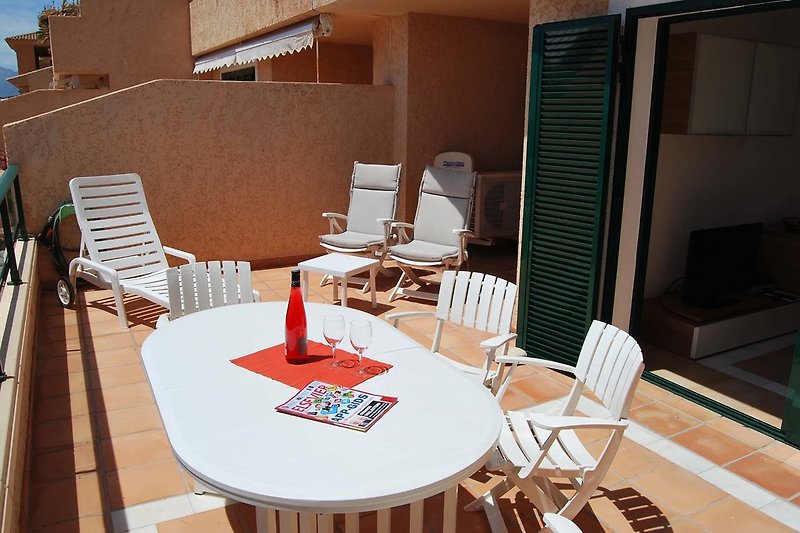 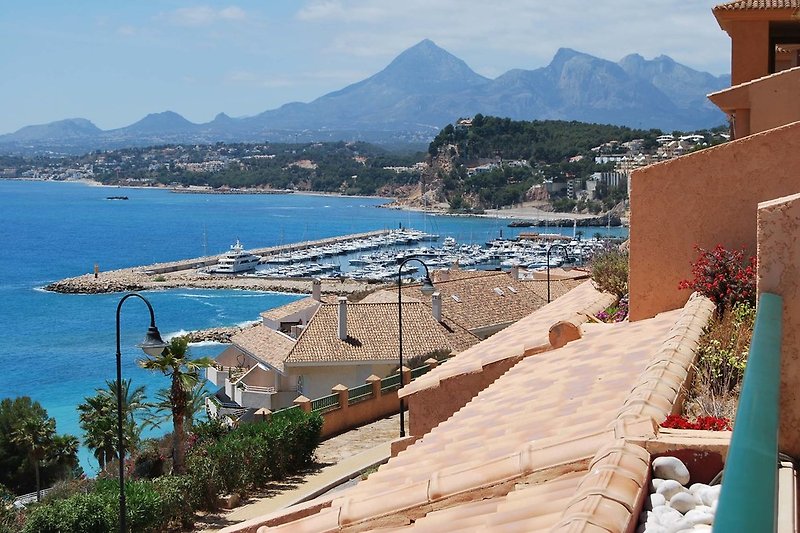 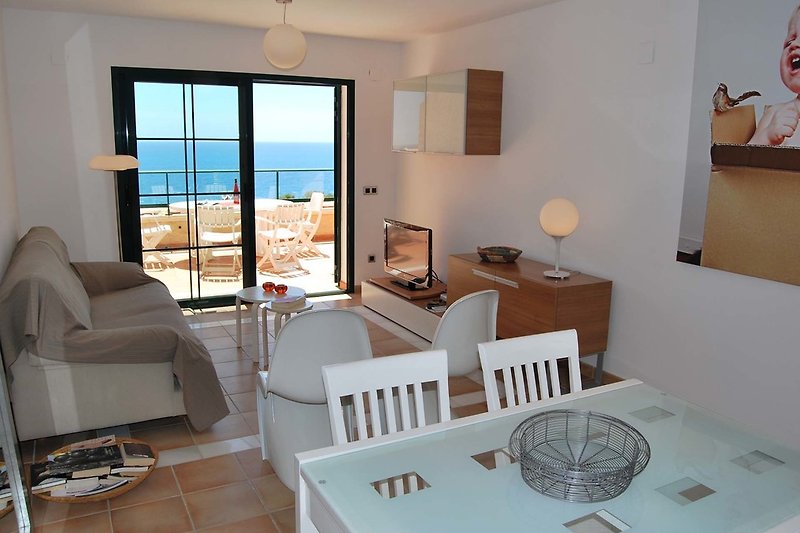 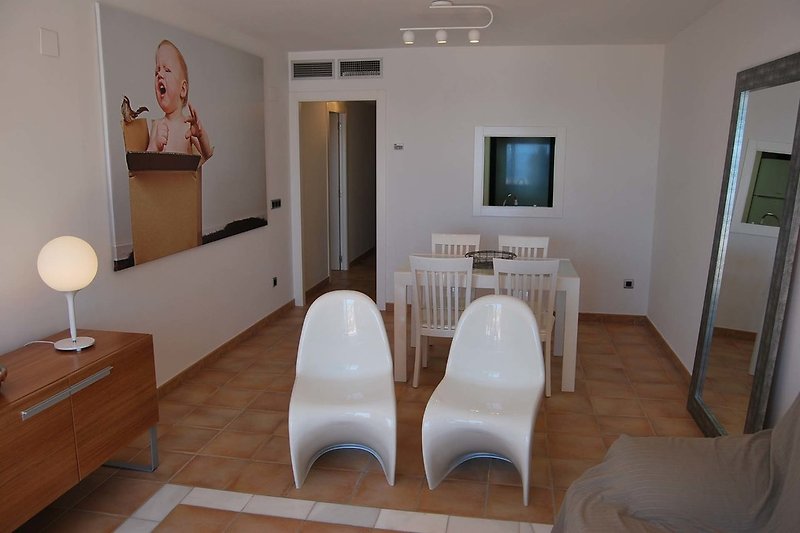 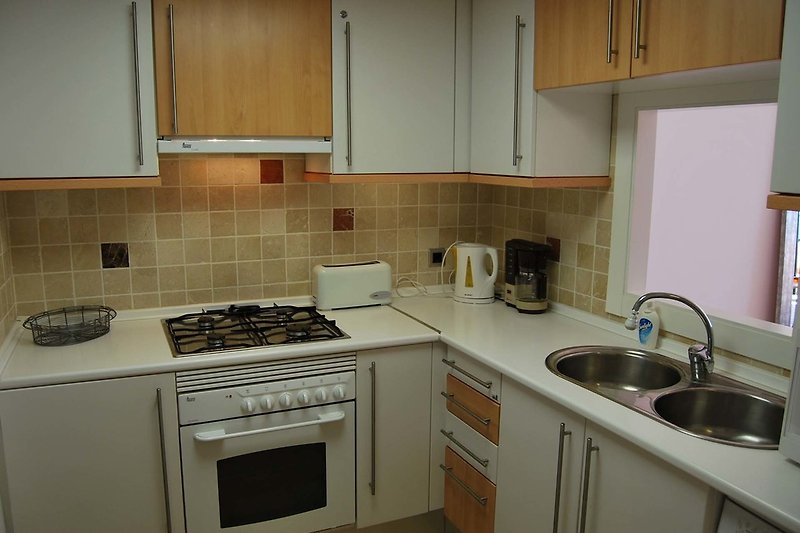 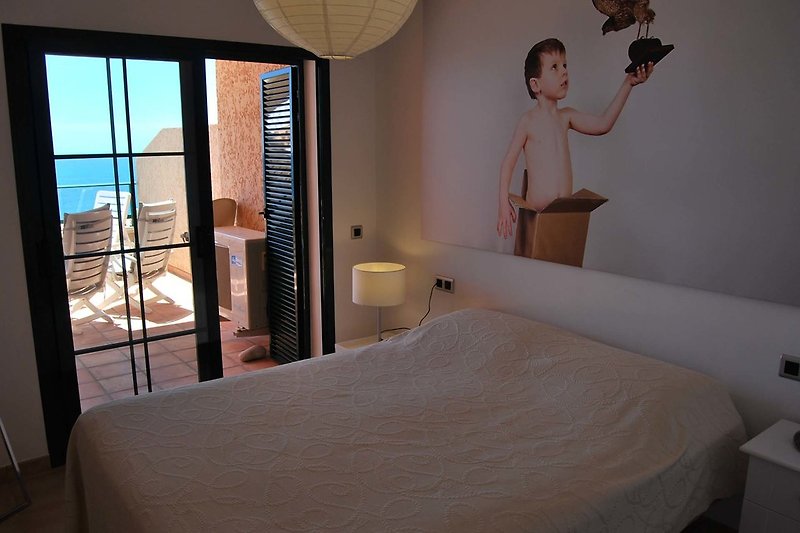 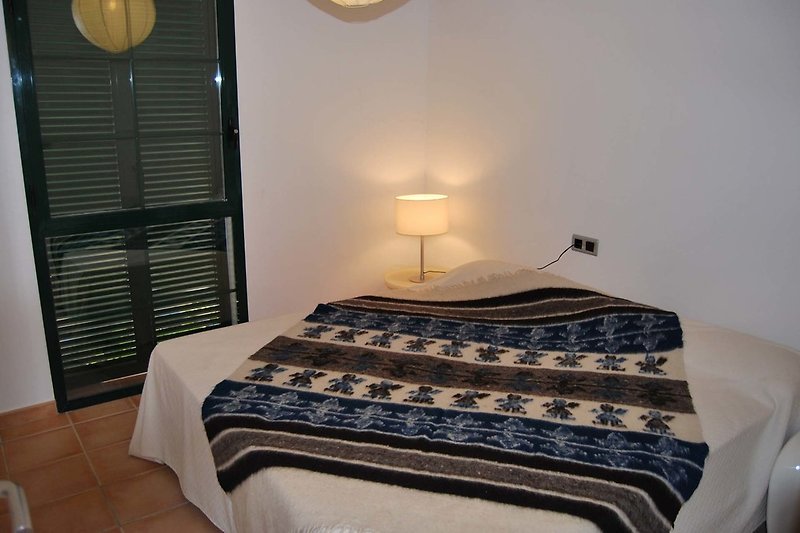 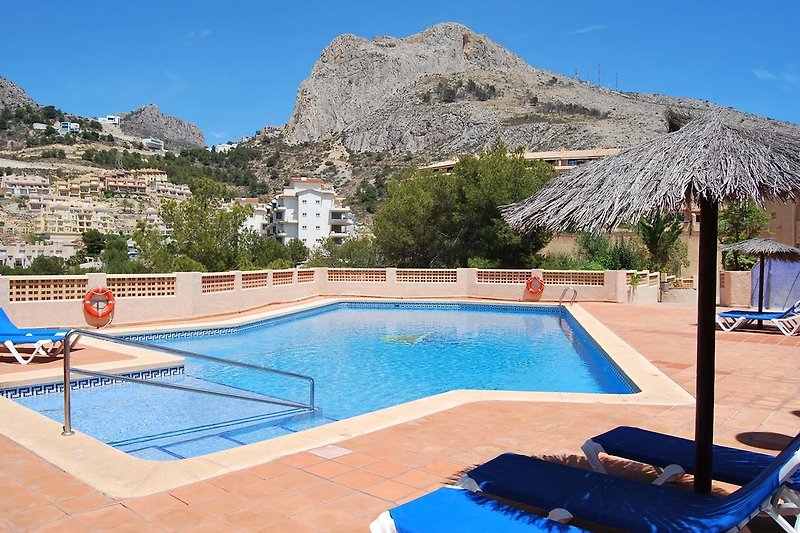 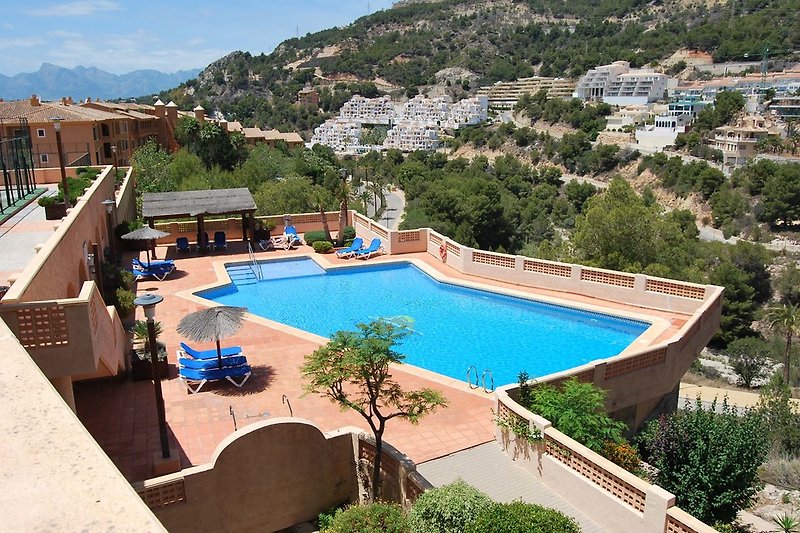 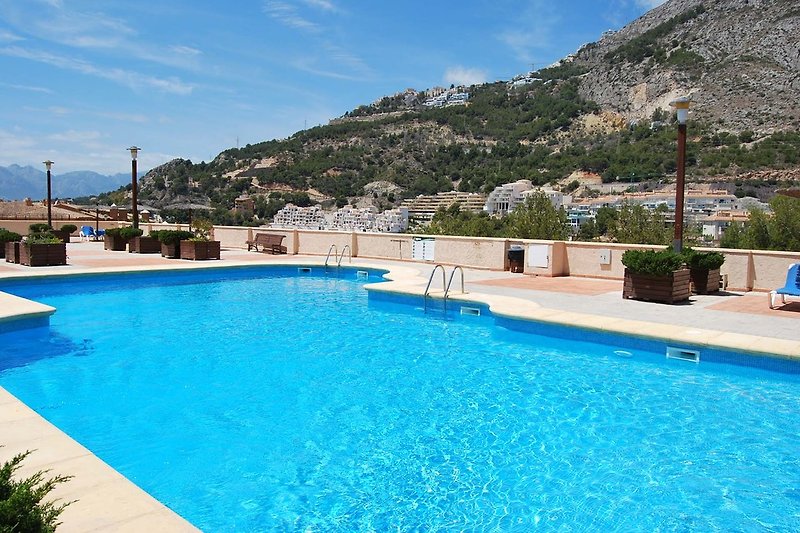 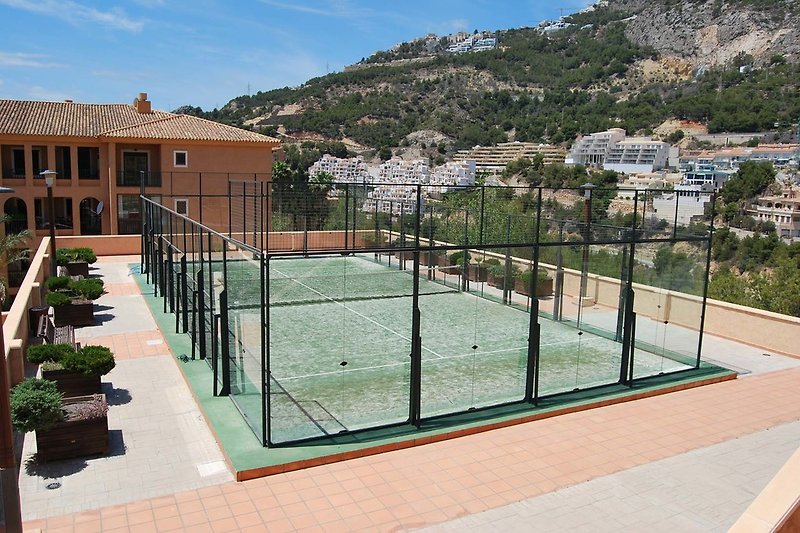 Since it is located on the south terrace you have a beautiful view over the Mediterranean Sea, the port of Altea Mascarat and the bays of Altea, Albir and the Sierra Helada. The condo has 2 swimming pools and 2 padel tennis courts. Down a path, you can reach some beaches and the bars and restaurants of Mascarat Marina.

Living / dining room with sofa, armchairs, dining table with 4 chairs and satellite TV with German channels. From this room you come through a sliding glass door to the terrace.

Adjacent to the kitchen a small room with washing machine, iron and ironing board.

1 bedroom with 2 double beds and ensuite bathroom with bath / shower, washbasin, WC and bidet. From this bedroom you have direct access to the terrace.

Outdoor terrace with stunning views over the Mediterranean, the marina and the bays of Altea, Albir and the Sierra Helada. The terrace offers a deck chair, 2 adjustable chairs, garden table and 6 chairs and awning.

Altea, the cultural capital of the Valencian Community, belongs to the province of Alicante and is located on the Costa Blanca, directly on the Mediterranean Sea. The old town is situated on a hill, where the picturesque church with its characteristic blue domes towers far above all the bright white houses. The "Nuestra Señora del Consuelo" is also called the business card of the city.

The Costa Blanca is of course an ideal destination for sun, sea and beach lovers. The various coastal towns all have their own Spanish charm with extensive (pebble) beaches, boulevards and sidewalk cafes. Altea is located between Alicante (50 kilometers south) and Valencia (100 kilometers north). However, the nearest big city is the popular resort of Benidorm.

Altea has grown over a vast area over the years. In addition to the city of Altea with its old town center, including the villages Altea La Vella, Pueblo Mascarat and Altea Hills to the municipality. In the immediate vicinity you will also find the popular coastal towns of Albir and Calpe. The latter is best known for the rock in the sea, "Penyal d'Ifac", and its fishing port with fish market and the many fish restaurants.

Benidorm is less than 15 minutes away by car. The clean and safe beaches have been awarded many times. Apart from sunbathing, you can also practice (water) sports such as volleyball, beach football or water skiing (at the water ski school cable car).

Do you have enough sand from sandy feet? You can have a great time in this environment. In the old town of Altea, the narrow, winding and sloping streets almost all lead to beautiful panoramic views of the city and the Mediterranean Sea. Also "Sierra de Bernia", the sprawling mountain area north of Altea, offers many opportunities for walking, cycling and hiking.

There is enough entertainment for the whole family. In and around Benidorm there are various amusement and water parks. Sports enthusiasts can let off steam in the "Parque de Foietes", where they can practice various ball sports, use the athletics track or swim in the Olympic size swimming pool.

Young and old can enjoy themselves in the lively Benidorm until late at night.

Altea is known primarily as an artists' village, here you will find numerous galleries and craft shops. Maybe you will find an original souvenir here! In addition, there are several attractions in the area. For example, in the northwest of Altea you will find the castle of Guadalest, "El Castell de Guadalest", except for a glimpse into the life at that time it offers an incredibly beautiful view.

In Altea you will find several supermarkets, a drugstore, a bakery, a bicycle rental and a variety of shops, restaurants and sidewalk cafes.

This price includes the cost of booking fee .

surcharge per additional person 3,00 € night
prices are - per object - at an occupancy up to: 4 Persons 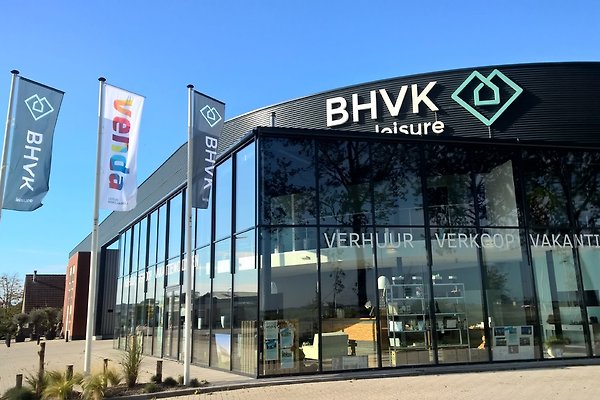 
Provider identification for this advertisement no. 172348

Further accommodations from Company B. Leisure 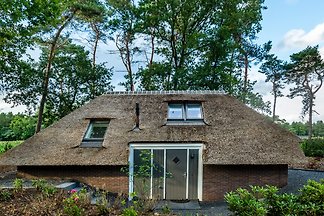 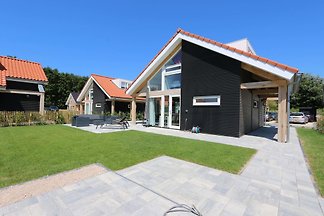 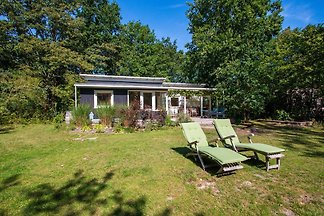