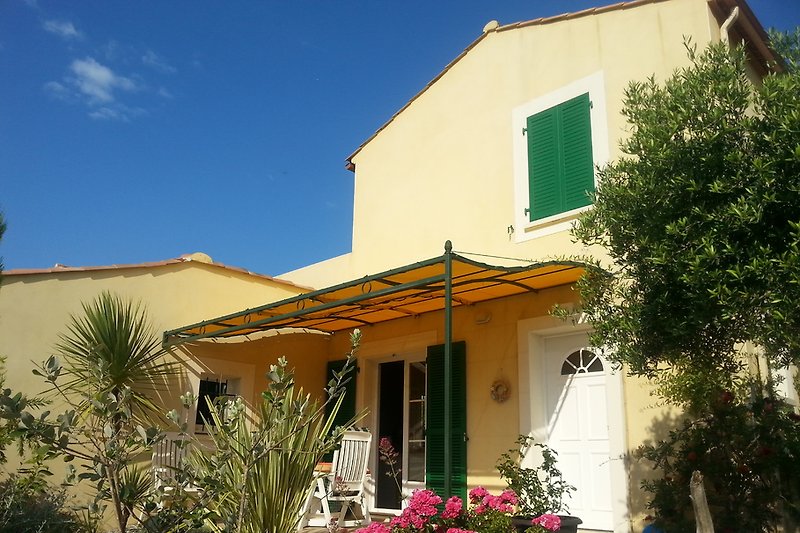 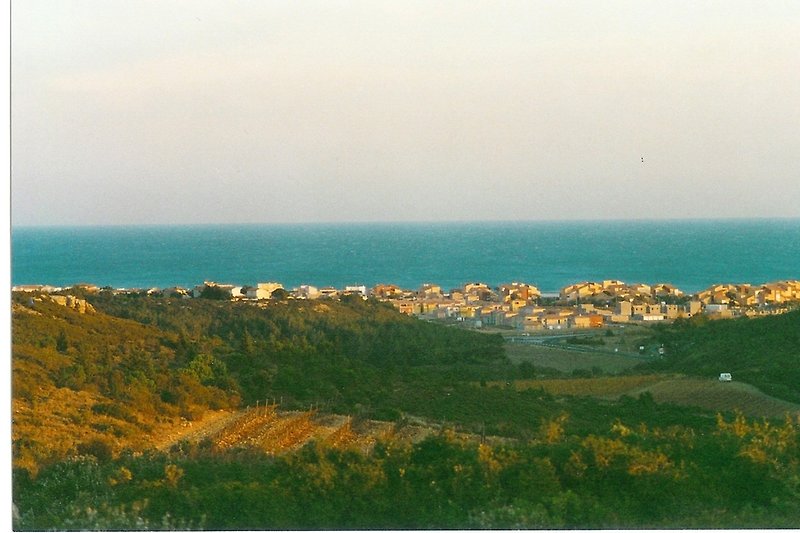 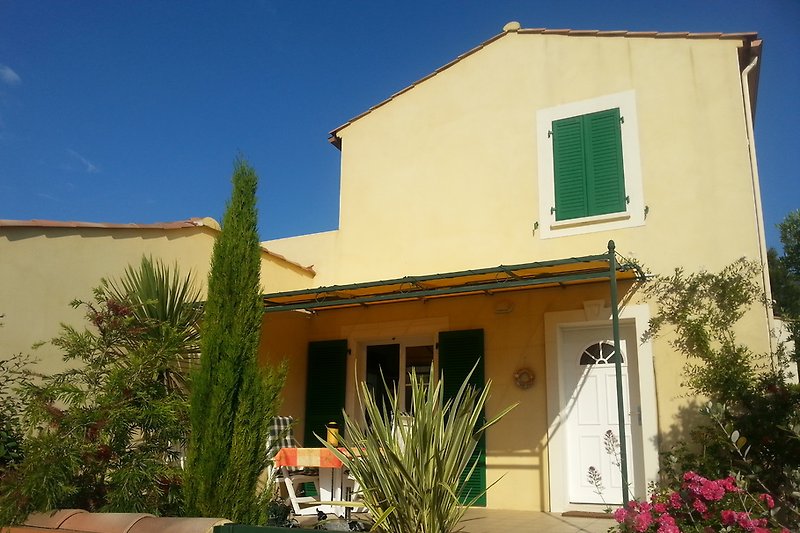 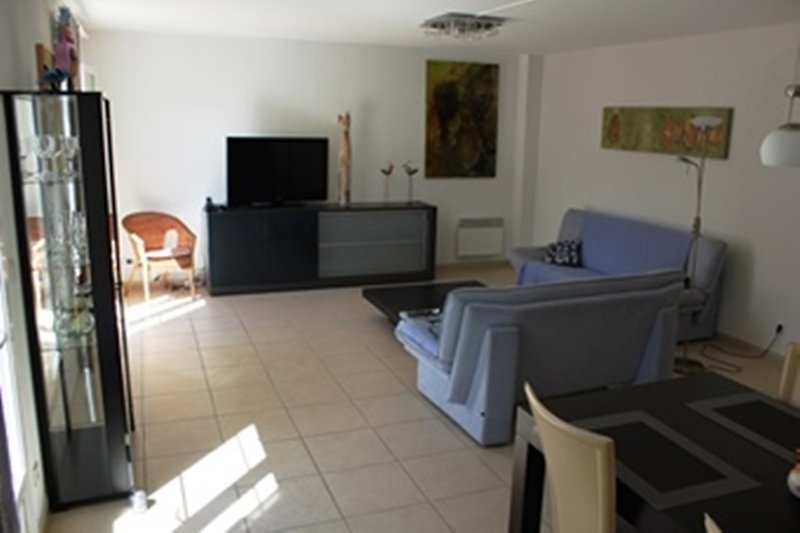 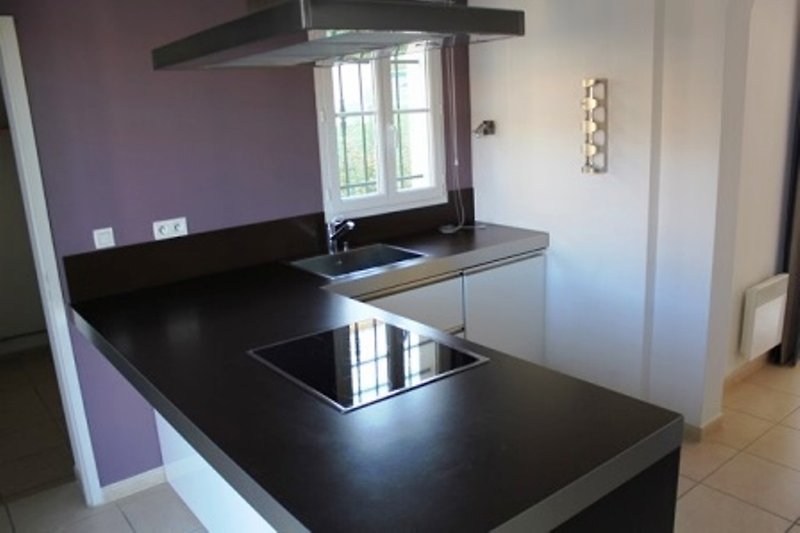 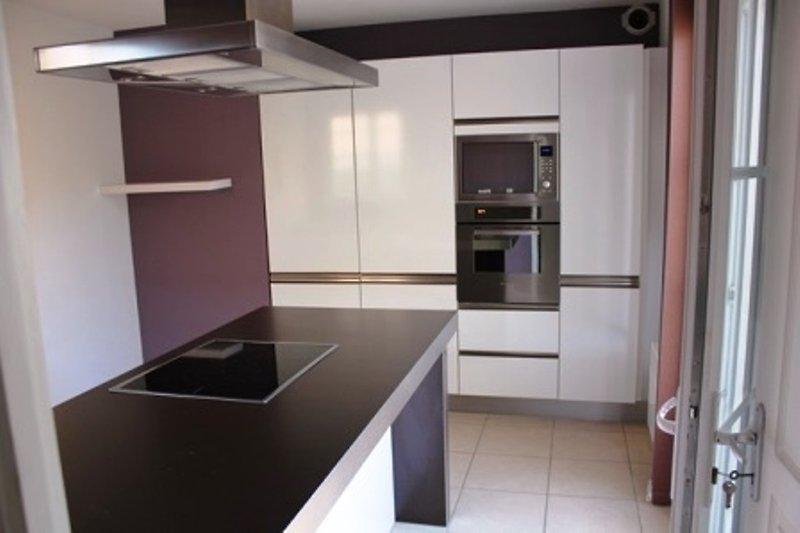 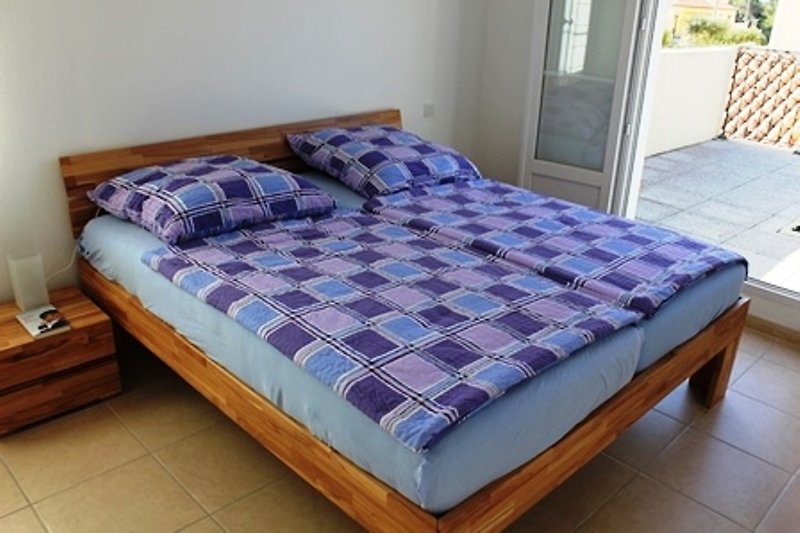 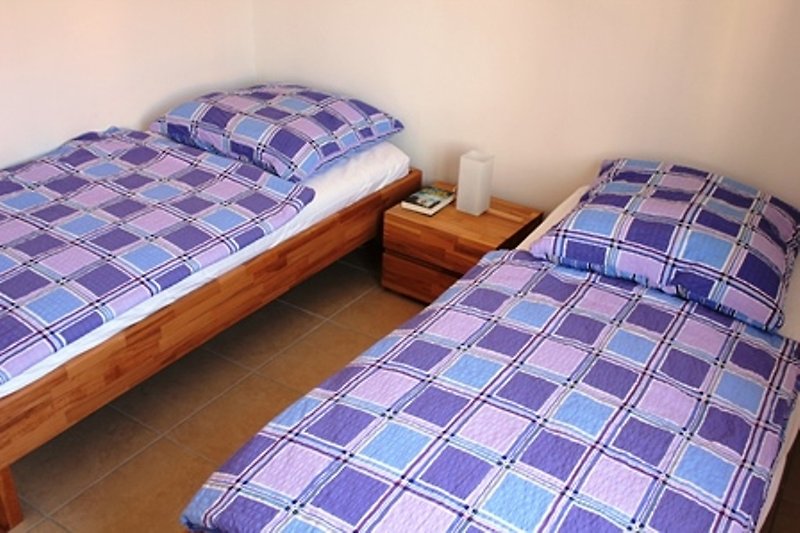 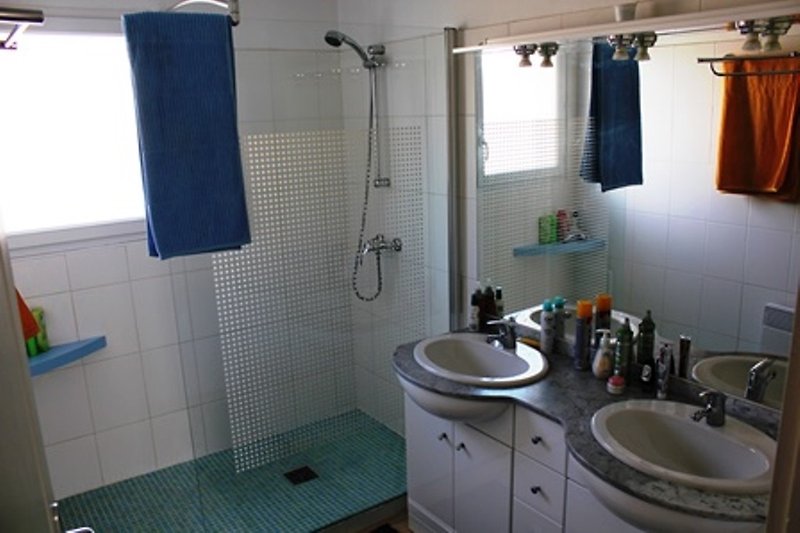 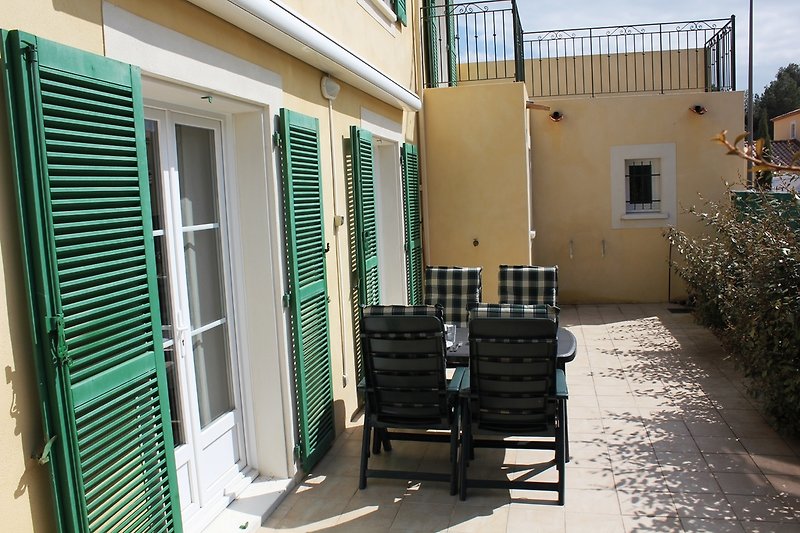 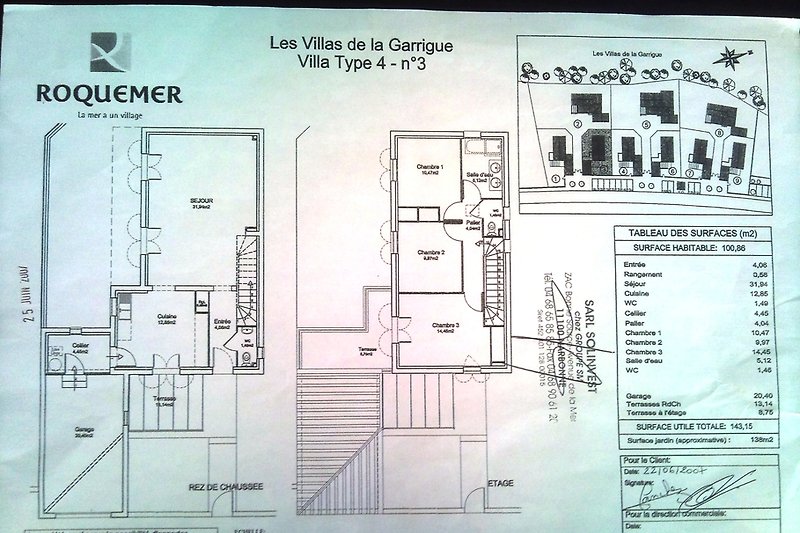 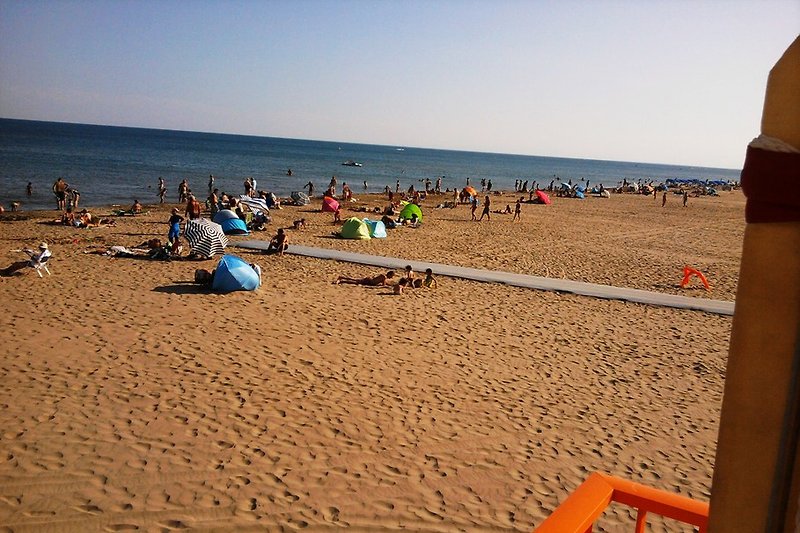 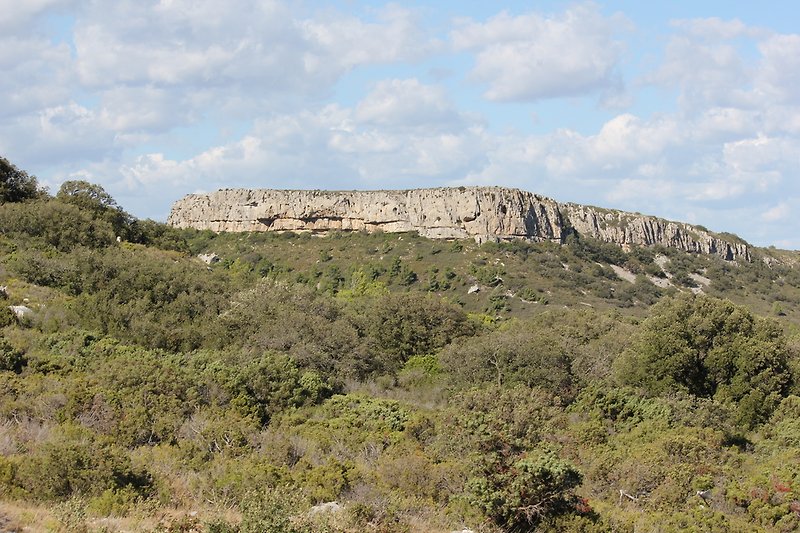 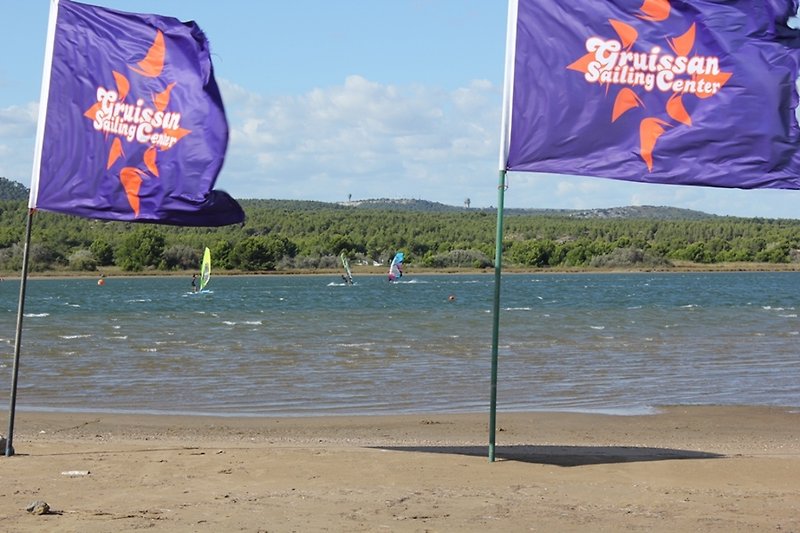 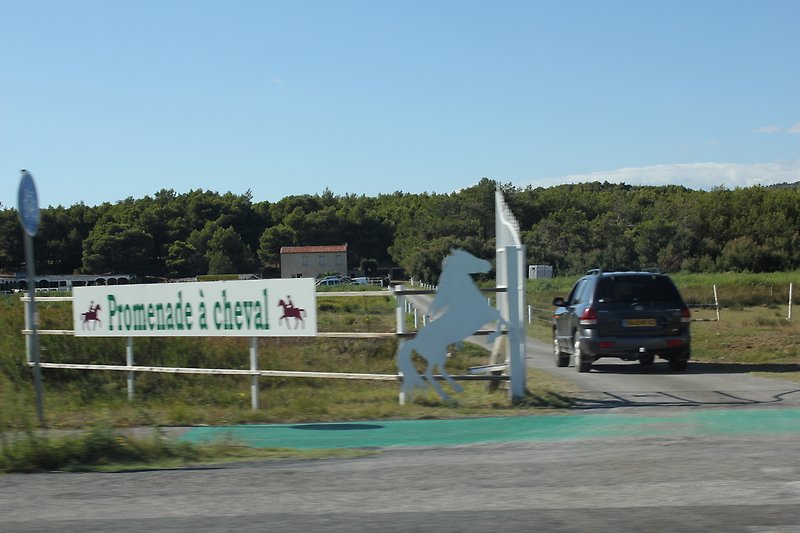 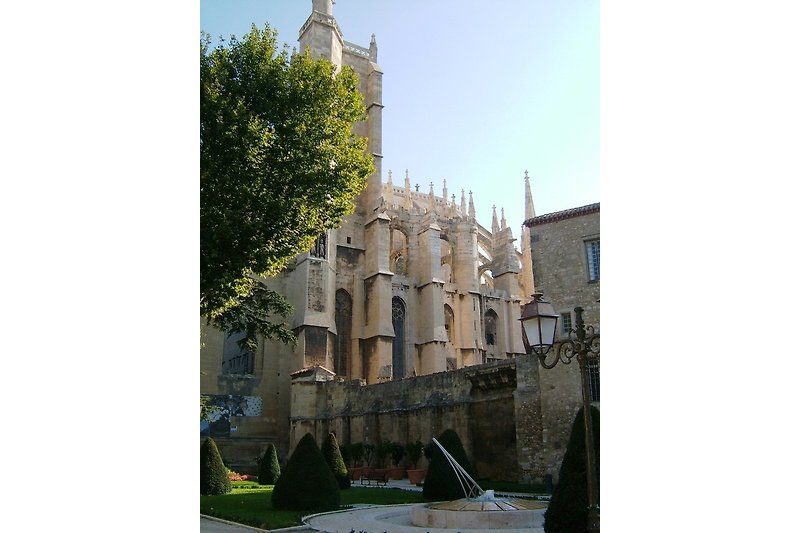 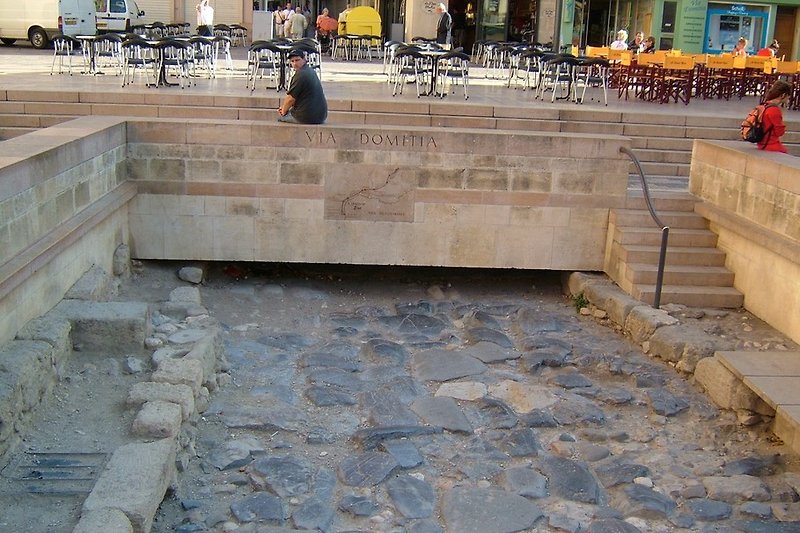 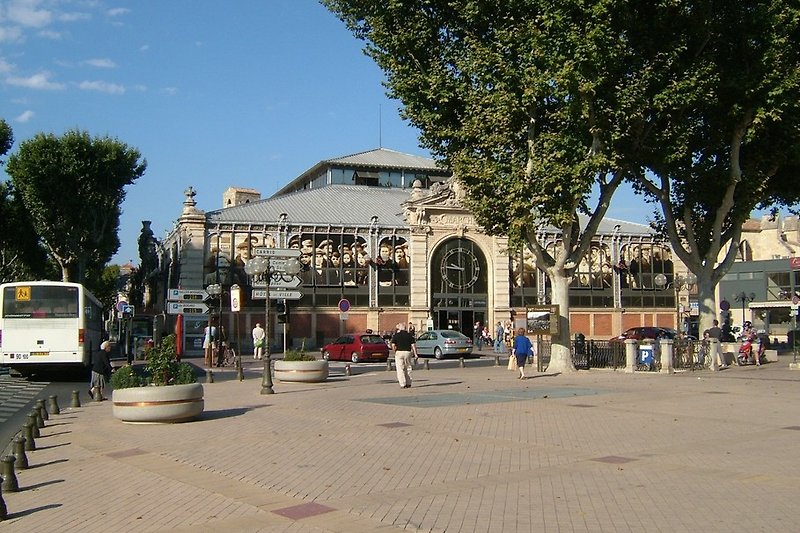 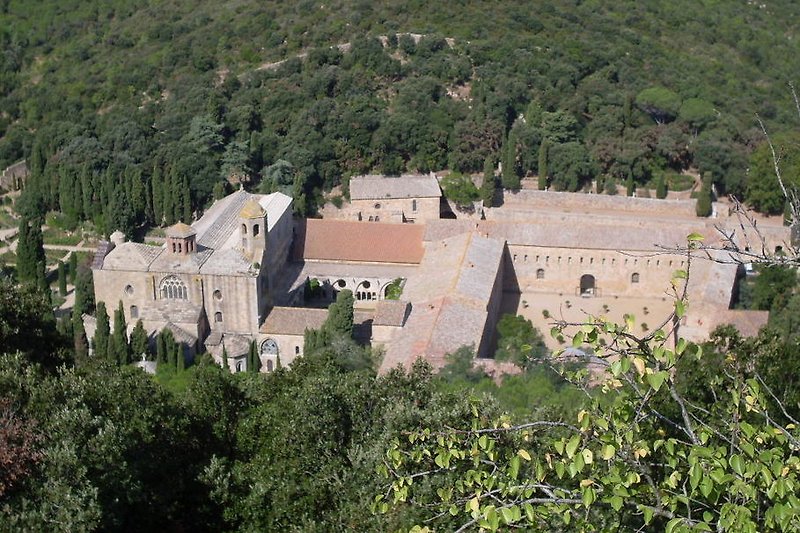 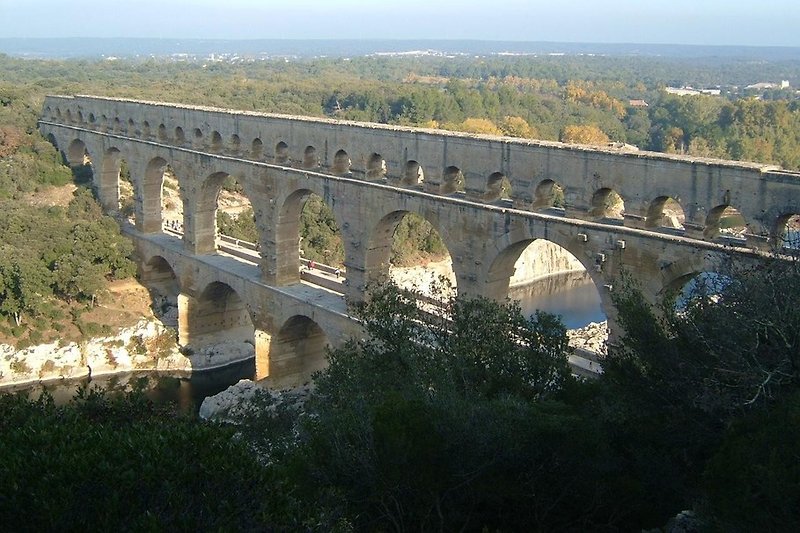 For the nice days of a year:
Our house, built in the mediterranean style, is situated in the quartier Roquemer on the entry to the village Narbonne-Plage. It belongs to the residency LES VILLAS DE LA GARRIGUE. The residency is situated directly to a nature reserve and the vineyards. It is 900 m by foot to the beach of the mediterranean. The center of the town with shops and restaurants can be reached within 900m.

In front of the house you can find a breakfast terrace and behind the house another terrace in the direction south/west furnished with garden furniture.

Additionally a garage is part of the house with direct access to the house.

Narbonne-Plage
After crossing the picturesque Clape massif, at the foot of the hills you will discover the pretty seaside resort of NARBONNE-PLAGE, 15 km from NARBONNE, the first Roman colony in Gaul.
The beach here is 150 - 200 m wide, very light and fine sandy and about 900 m away.
The house is located on the outskirts, 900 m walk from the sandy beach. Narbonne-Plage is a quiet, family friendly resort, right on one of the most beautiful sandy beaches in Europe.

Add to that the convenient and hospitable location in the heart of an area being great into outdoor sports activities. Narbonne-Plage benefits from 300 days of sunshine per year and has since 1988 hoisted the blue flag, proof of the excellent quality of the water, the beach and the port. The bathing season is from April to October.
The sandy beach is only 900 meters from our house.

From March and throughout the summer Narbonne-Plage is the scene of many events. On trails around our resort, you can discover a varied, magnificent and protected environment either on foot or by mountain bike. Fishing on the sea, sardine and tuna fishing and sport fishing will give your stay some typical accents. With nearly a hundred free events, you have the opportunity to dance and have fun.
Its harbor with 600 berths, its remarkable 5 km long sandy beach, its sports facilities and its recreational facilities welcome all families.

The nature reserve Massif de la Clape with its rugged mountain ranges, with its pine forests and vineyards and its with charming hiking and riding trails welcomes you to tour the nature. The chapel "Notre Dame des Auzils" rises like a protector in the massif above the maritime cemetery near Gruissan, to which the fishermen and their families make a pilgrimage on Easter and Pentecost. The walls are decorated with votive pictures.
Hiking tips, maps and information material about destinations of interest are available in the Tourist Information, also in German language.
If you want to explore the area by bike, you can rent bicycles on site.
You can also visit the market in St-Pierre sur Mer, just 3 km away (daily until 1 pm). There you will get fresh fish, mussels, vegetables, spices and fruit, wine and local products. Craftsmanship and souvenirs are in demand.
The Mediterranean heart of the inhabitants of Gruissan is fully expressed in the old village, with its houses of old and patina-covered stones, winding alleys winding around the foot of its castle, the Tour Barbarousse. Gruissan is one of the most beautiful villages in France. The old town with its picturesque streets invites you to stroll.
The centerpiece of the holiday resort, which is interspersed with cultivated green areas, is the marina with its promenades, cafes, restaurants, shops and boutiques. For entertainment there is the casino.
Do not miss the salt extraction facilities of La fleur des sel du Pays Audois. During a guided tour, you will be shown how the salt is extracted from the sea.

Halfway between Narbonne and Narbonne-Plage, pass the Domaine de l`Hospitalet, home to the world's largest barrique wine cellar (barrel oak barrels 225-228 l). Here you can taste first-class wines. Attached is its excellent restaurant and an artist market. Besides, there is a small museum about the horse, the wine, the automobiles and the phone.
For more information about nearby golf courses, contact of the Golf du Languedoc-Rollillon (FAX: 0033 (0) 4 68 39 52 30 or on the internet.

This price includes the cost of Cleaning, internet and bed linen .

prices are - per object - at an occupancy up to: 4 persons

Attractions
The Languedoc offers 300 sunny days a year and 200 km of beach from the Carmargue to the Spanish border. The coast is largely preserved in its original state and offers a variety of landscapes, typical fishing villages and seemingly endless sandy beaches and valuable cultural heritage: Romanesque and Gothic churches meet you on your itinerary. You will find sites and buildings of antiquity that rise up at the most beautiful viewpoints, and the cities will surprise you with their stately renaissance houses with their refreshing, hidden from the street inns. Worth seeing are the Cévennes town of Alés, the Occitan Béziers, the medieval Carcassonne, Mende in the Lozère, the dynamic Montpellier, the mosaic Narbonne, the Roman city Nîmes, the Catalan Perpignan, the Mediterranean Sète and of course the Cathar castles and monasteries.
Gruissan and Narbonne-Plage are located in the Department Aude, the "land of the catherers" and offer a variety of recreational activities. Not only for children worth a visit to the Réserve de Africaine de Signean.
And not to forget, Languedoc produces excellent wines.

A few kilometers away is the town of Narbonne, that was founded by the Romans the 118 BC. Of particular note are the Palace of the bishops built in the 11th century, the cathedral Saint Juist built in the 13th / 14th century, the archaeological museum, the Horreum, Roman warehouse and remains of the Roman road and the Museum of Art and History.
River tourism on the Canal de Robine.
A few years ago, on the town hall square (Place de l`Hôtel de Ville) remains of the Roman road VIA DOMITIA were uncovered.
At the beginning of the 20th century, the stylish Batard Pavilion was built near the Robine Canal. Its magnificent metal construction, its stone pillars and gates, and its majestic roof still house one of the most beautiful markets in France. It is definitely worth a visit. Throughout the region, the Narbonne market is famous for its quality and atmosphere.
The Abbaye de Fontfroide (14 kilometers southwest of Narbonne) was founded at the end of the 11th century as a Benedictine abbey and enjoyed a great heyday. In 1145 it was annexed to the Cistercian order and during the crusade against the Albigenses it was an active bastion of orthodoxy. The abbey can be visited. View from the summit cross above the abbey is breath taking.
Located on the Aude "Rive Droite", the medieval city of Carcassone, considered a World Heritage Site, has 52 towers and two concentric belts.

The Holiday home has 2 reviews.

from Hajo C. from Walchwil

from Andreas from Rothenberg 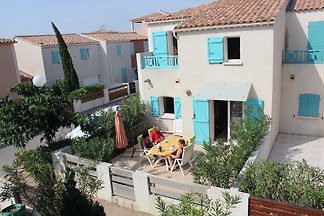