Views of pool and sea 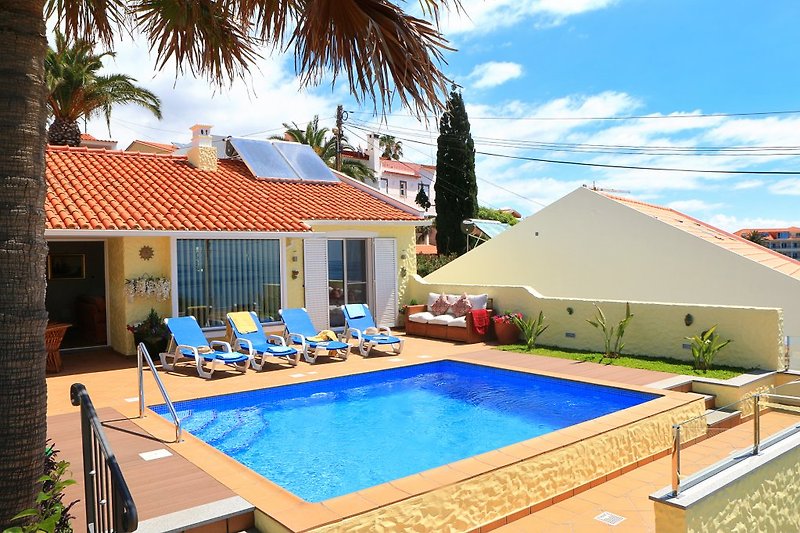 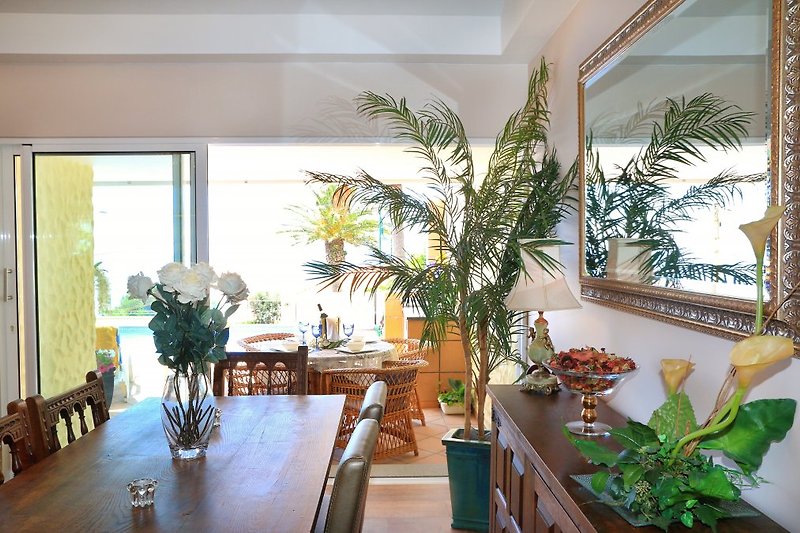 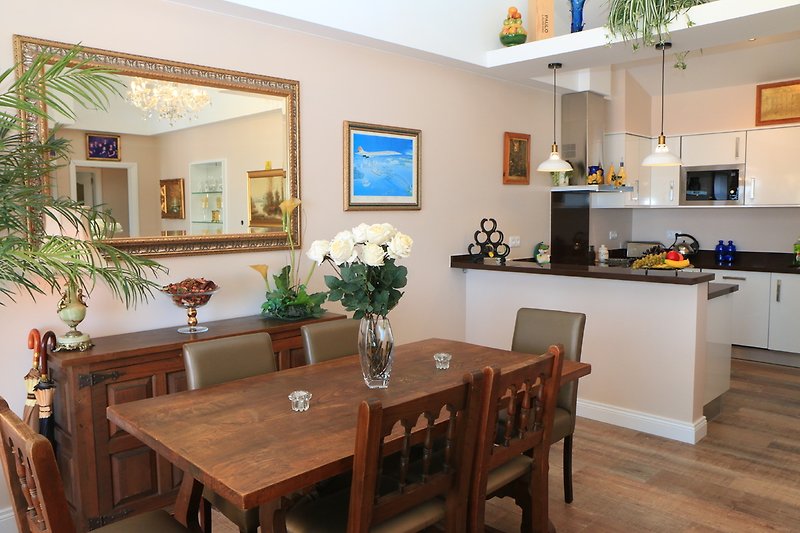 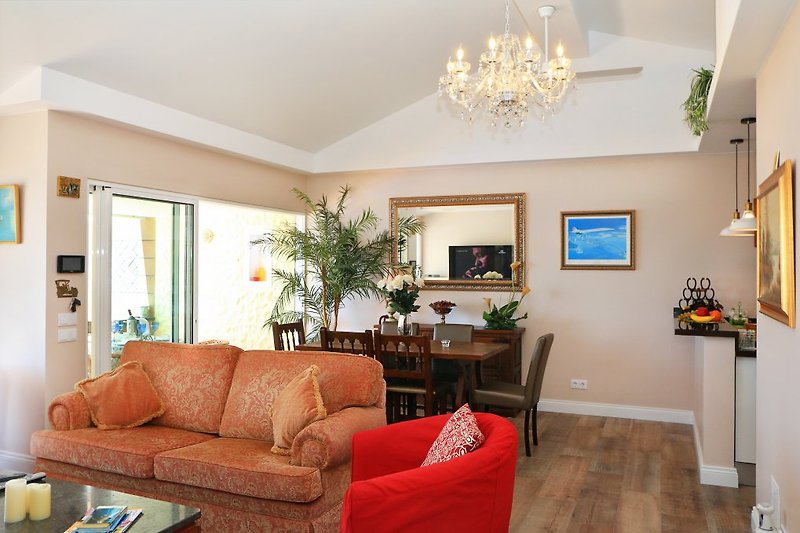 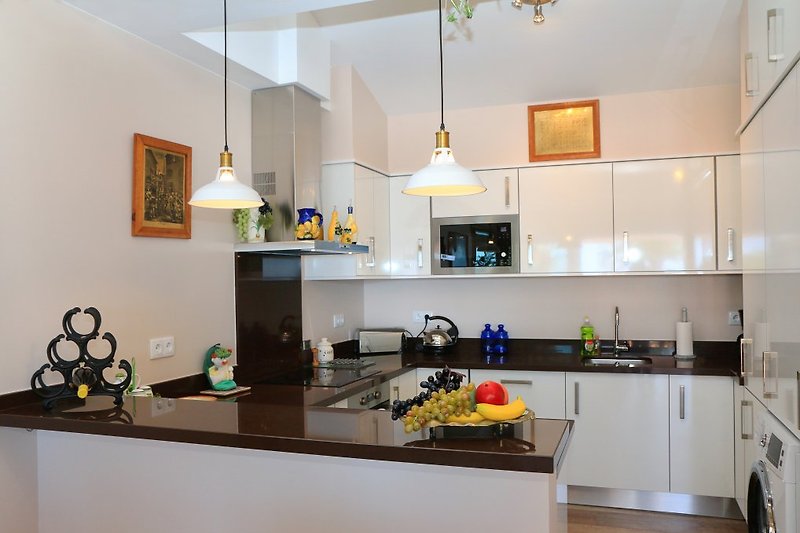 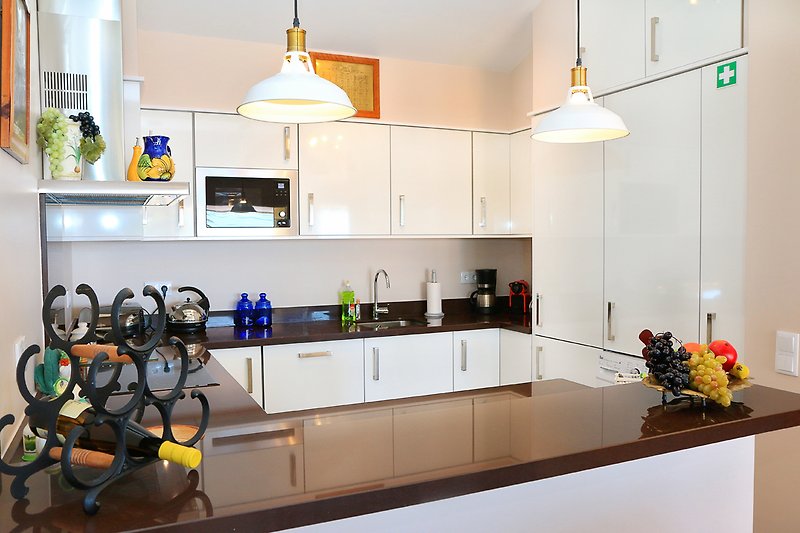 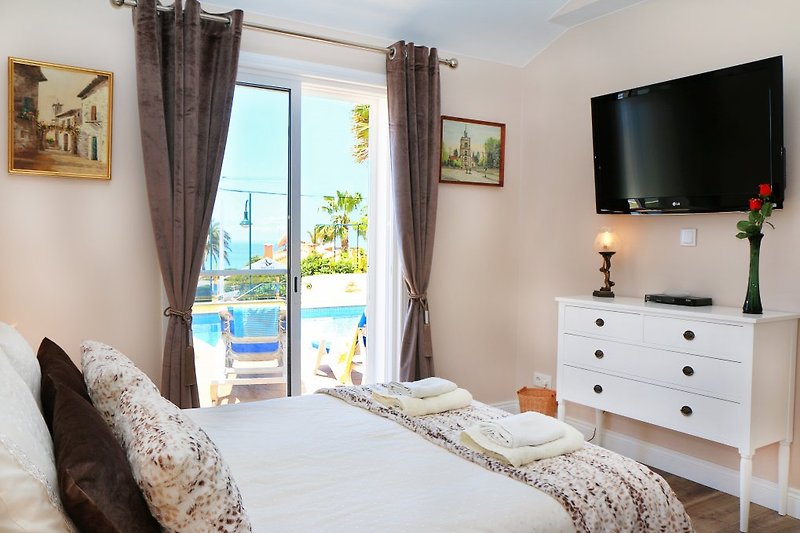 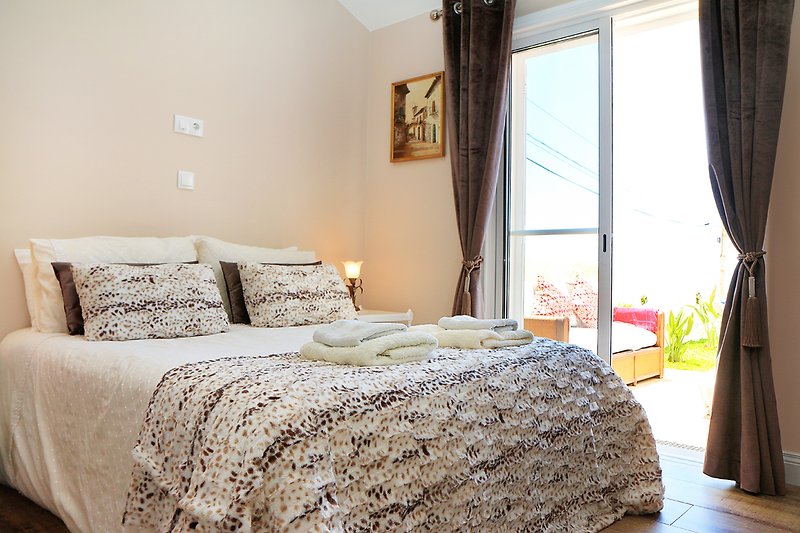 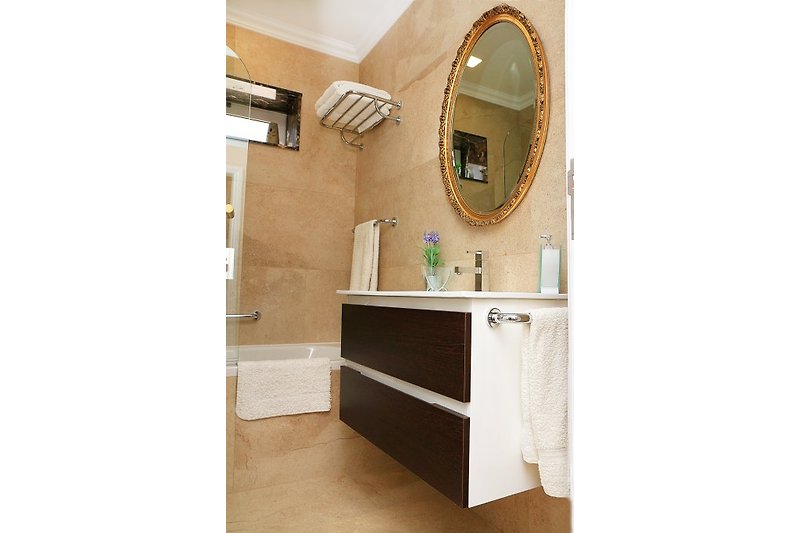 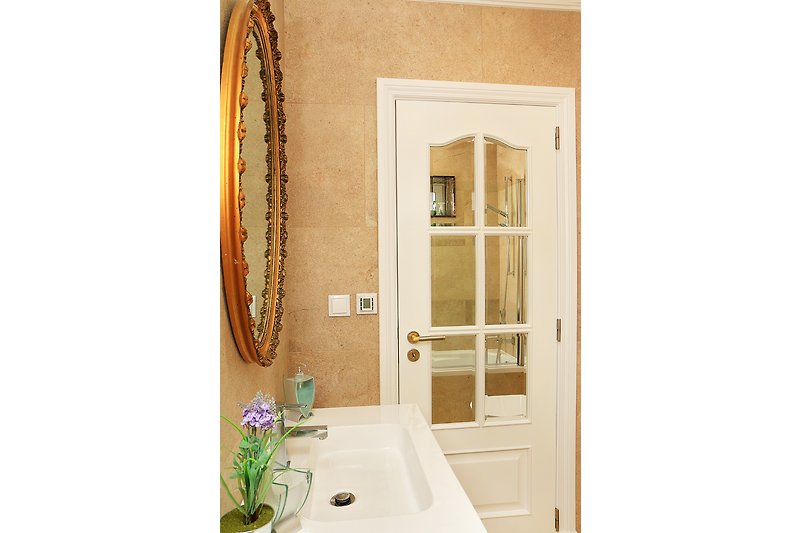 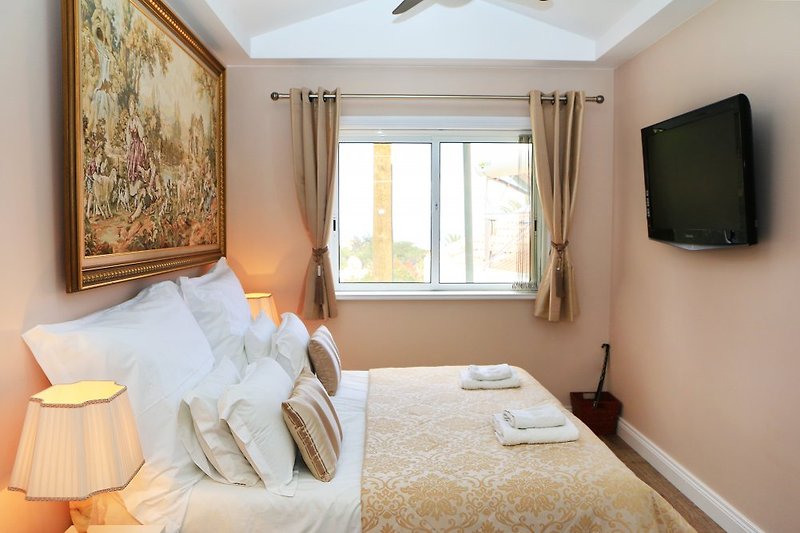 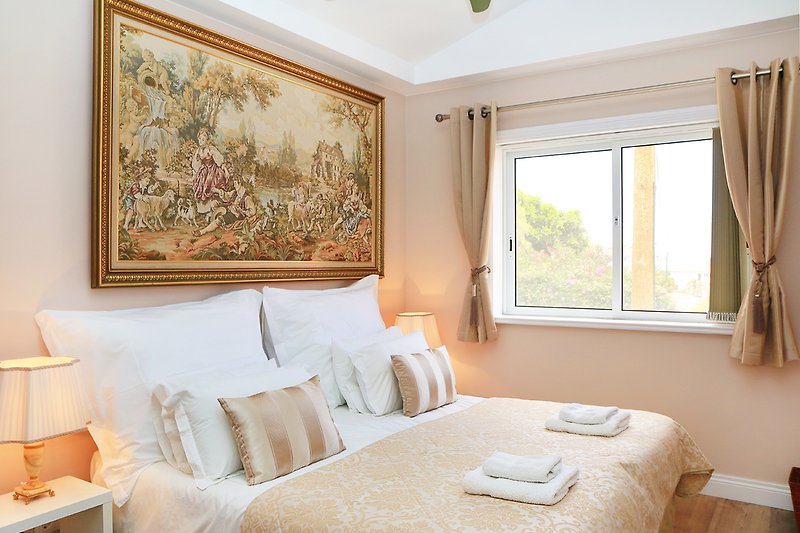 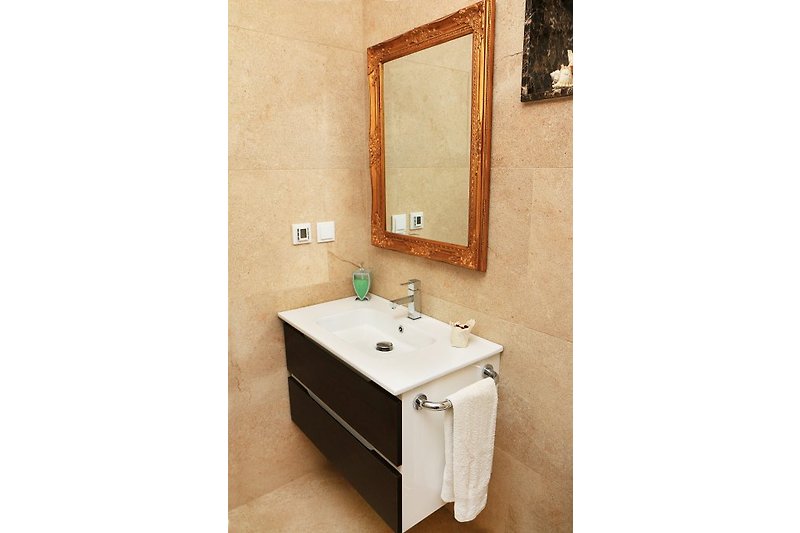 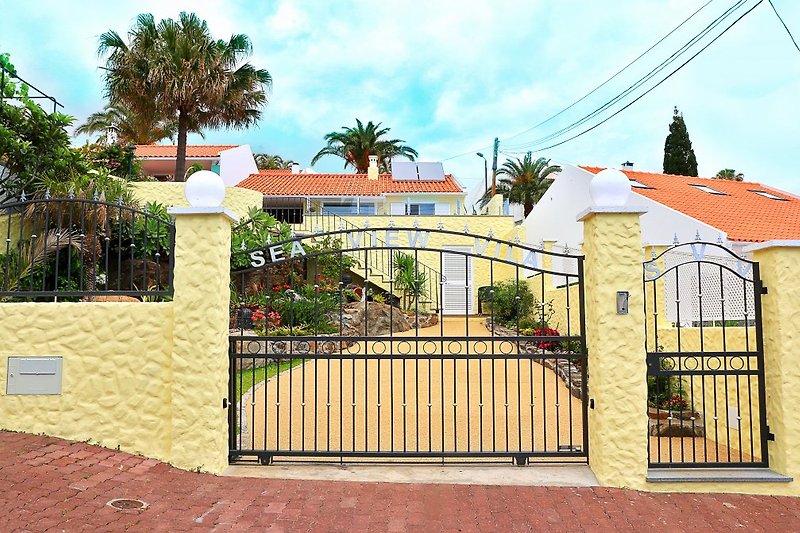 View of villa from the road 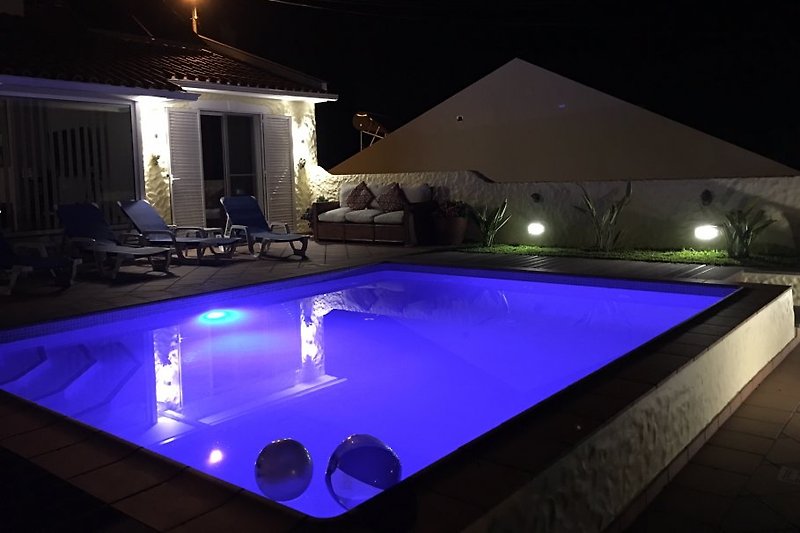 This charming one storey end terrace house, completely renovated and decorated in an elegant style. 1 bedroom with double bed facing the pool are, 2nd bedroom with twin beds and private shower room, social complete bathroom, complete new kitchen with all the modern facilities including dishwasher and washing machine, open space with dinning area and lounge area with flat screen tv and large binoculars to see the stars and moon at night time of if your are lucky maybe dophins out at sea. BBQ and large sun terrace area, private swimming pool and with views of the sea, free wi-fi in a quiet location but only a few minutes walk from various amenities such as restaurants, mini market, diving centre, Lido swimming sea area where you can do diving or snorkling.

No car is required, excellent bus services to Funchal City only a few minutes walk from the villa.

Airport transfers and sight seeing tours can be organised.

This area offers a variety of activities where you can explore the mountains , enjoy water sports or just relax by the pool. Caniço de Baixo has also a variety of restaurants where you can enjoy the Portuguese and international cuisine, have fresh fish from the Atlantic waters and all delicious types of food.
Caniço de Baixo is the sunny south coast of Madeira between the capital Funchal (about 7 km) and the airport at Santa Cruz (about 10 km) , the seafront district of Caniço.
Located in one of the best locations of Madeira with plenty of sunshine, making it the ideal location for a relaxing and fun-filled holiday.
Caniço with its flower gardens and palm trees, cozy restaurants, bars, shops and villas very popular, yet quiet. Romantic rocky coves, rocky terraces with stairs into the sea and the pebble beach for swimming in crystal clear waters or for sunbathing. Has 2 local diving centers The waterfront promenade invites for an evening stroll. Two golf courses are within 15 t0 20 minutes drive.

The 25% deposit is non- refundable. 100% payment is required for cancellations with less then 4 weeks

The old village of Caniço is a bustling, rather appealing place, centred around a main square and 18th-century church, with a maze of one-way streets extending up into the surrounding hillsides. Most of the hotels, however, are situated in lower (Baixo) Caniço, a more recently built residential area on the coast, reached via a steep road or an even steeper, older, partly cobbled street.

Stretching for 1 mile along the coast and extending 700 yds inland, this relatively newer part of the village lacks character and much choice of amenities but enjoys a fine natural setting, its buildings, mostly new apartment blocks and hotels, terraced down the hillside. To the E of Baixo is the developing area of Reis Magos, which has a couple of large hotels, an oceanfront promenade and a small, stony beach but is otherwise lacking in amenities.

The areas is mostly suited to mature couples, as there is little or no nightlife. Steep terrain may not make it suitable for those with mobility difficulties. Popular German enclave somewhat fewer British visitors. 3- and 4-star hotels and apartments, all modern and mainly well appointed but with little overall plan. Developing timeshare presence.

Locality:
Canico is on the south east coast of the island, (it is 5 mls E of Funchal and 8 mls SW of the airport). It is set just off the coastal highway, in hilly terrain, the village of Caniço is situated on a small, flattish plateau 1½ mls inland, accessed by steep, winding road. The resort area of Caniço de Baixo hugs the coast, sitting above a dramatic shoreline of black volcanic rock.

I am portuguese, manager of the holiday rental company AYS-Madeira Holiday Rentals and own this little charming villa in partnership with my husbands parents who are english and use it for their own holiday visits to Madeira. 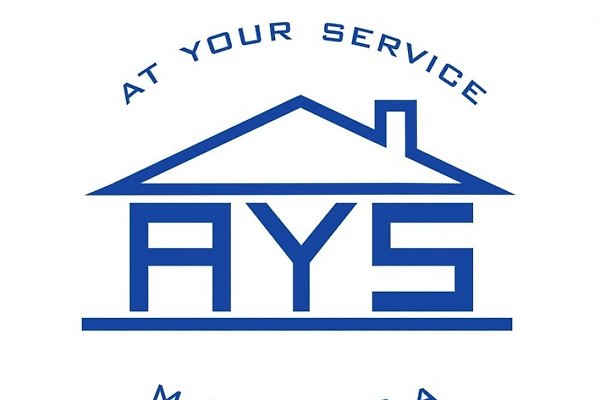 
Provider identification for this advertisement no. 100088 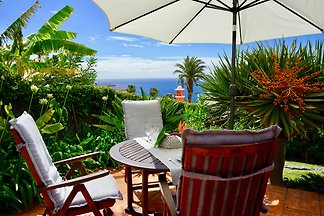 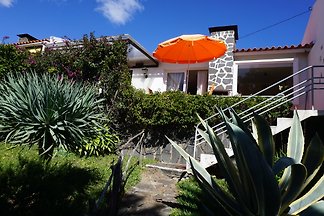 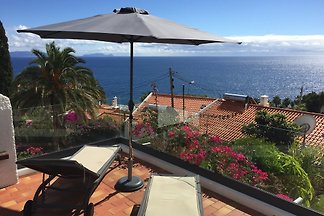 All accommodations in Caniço de Baixo